Women for America First and U.S. Coachways said different theories are floating around, but both tell a slightly different version of events.

“This story is so ridiculous. We paid. The busy company took $4,000 of our money. Two buses were paid in full, and they even canceled those buses at the last minute,” Women for America First chair Amy Kremer told the Daily Caller News Foundation on Saturday.

Kremer said in a Thursday statement that “less than two hours before our first chartered buses were supposed to leave for D.C., we were informed that the bus company was canceling all of our buses — including ones that were fully paid for.”

“This move left hundreds of grassroots activists stranded and unable to attend the Anti-Impeachment rally today in front of the Capitol,” Kremer’s statement continued. “We are incredibly disappointed at U.S. Coachways, their actions prevented hundreds of Americans from exercising their first amendment rights and to have their voices heard.”

U.S. Coachways Chief Marketing Officer Joseph Heap told the Daily Caller News Foundation on Friday that an organizer for Women for Trump, Cindy Chafian, waited until eight hours prior to the time she and her group were planning to leave for the D.C. rally to book six buses, and credit card payments did not go through for five of those six buses.

Chafian told the DCNF that Women for America First tried to make the trip to D.C. possible just three weeks before the rally was set to take place and worked with a number of brokers to figure out the best deal possible for those who wanted to join.

“We had finally consolidated the route to be able to put as many city stops on one bus as possible. I contacted the [U.S. Coachways] customer service representative a couple of days before and got the quotes from her,” Chafian said. “We were getting ready to finally finalize things with U.S. Coachways [on Oct. 16]. Normally, we wouldn’t wait that long, but we planned all this in two weeks. We weren’t really expecting it to take off the way it did.”

Heap said a U.S. Coachways agent actively worked with Chafian to try and clear her credit card so she could use it to book the six buses she was planning to order, and one of the charges “finally did go through, but the rest of them wouldn’t.”

Kremer told the DCNF payments of about $4,000 total for two buses did go through, but the bus company decided to cancel them at the last minute and have since emailed Women for America first notifications saying their payments are being refunded. 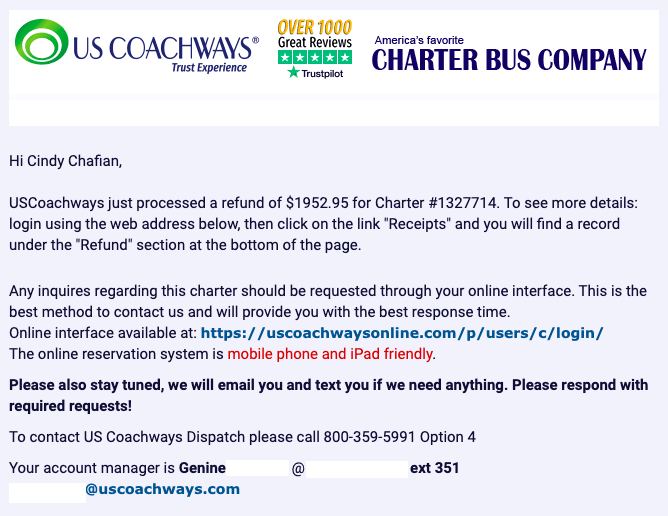 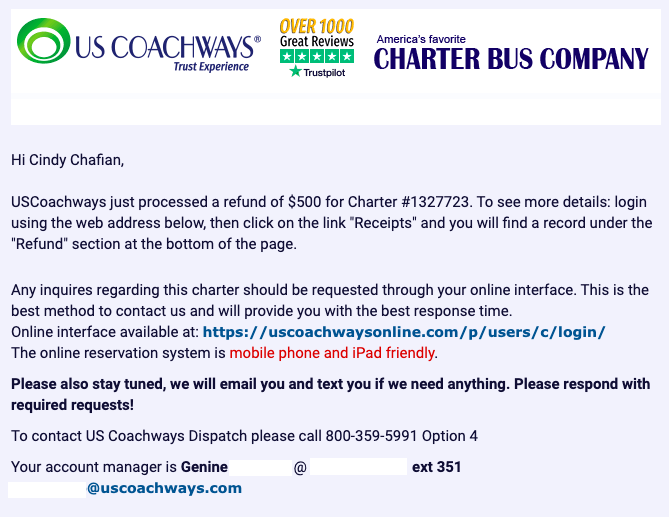 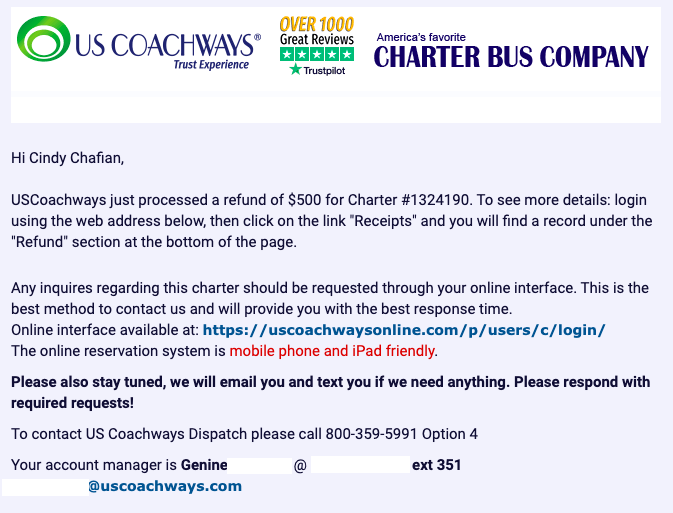 She also said after calling the bank to understand why the credit card the group was trying to use to book the buses was not working, the bank said it had flagged the number of large payment attempts as possible fraud, and that the bank then cleared the payments.

“I got an email from [U.S. Coachways] saying that something had been declined, and I thought, ‘That’s very strange because there’s no reason for that.’ So we contacted the bank and asked them if there was a fraud block — because that does happen when a number of large charges are being made — so we made sure that was the case,” Chafian said. “We were on the phone with both entities — the bank and U.S. Coachways. The bank was telling us specifically that there was no reason any of these purchases could be declined. The backend was not even showing [the bank] that any charges had been attempted by U.S. Coachways.”

She said the last charge attempt U.S. Coachways had done was approved, “and then — because the bank can see when a charge is attempted on their backend — there was nothing there. Nothing.”

Kremer told the DCNF “the money was there,” but U.S. Coachways “didn’t want to take the money” for the buses that were not fully paid for. (RELATED: Female Trump Supporters Reveal The Harassment They Get For Their Political Views)

Chafian said she wasn’t going to say what U.S. Coachways “did or didn’t do” because she doesn’t know what exactly the details were on its end as to why things were not working out, “but they were able to charge several thousand dollars, and then at some point, they did ask for Amy’s ID.”

Heap said the $4,000 was for deposits, not payments for all the charters, and that U.S. Coachways’ merchant account “is working fine,” adding that the company “charged out other customers that day without any issues.”

He said the company never received the rest of the money and kept working with Women for America First past business hours trying to get the payments to process, and that all money that was charged has been refunded.

“We had no choice but to cancel the buses as they were not paid for and we could not get their [credit card] to go through for the rest of the money,” Heap added. “I would like to say this also. If they didn’t wait ’til the last minute, this probably could have been resolved. As I said previously, our agent told her multiple times to book the trip starting from their first conversation. They choose not to book till 3 p.m. the day of the trip. That fact can not be ignored and is the true reason this trip didn’t go off.”

“They left no room for error. That is extremely poor planning and they are looking for a scam goat for their incompetence,” he said.

U.S. Coachways could not provide receipts to the DCNF due to customer privacy rules.