The national youth suicide rate has increased by 56% in 10 years, according to data from the Centers for Disease Control and Prevention (CDC).

“The chances of a person in this age range dying by suicide is greater than homicide, when it used to be the reverse,” CDC statistician and author of the report Sally Curtin told The Wall Street Journal. “When a leading cause of death among our youth is increasing, it behooves all of us to pay attention and figure out what’s going on.”

Experts highlight the Food and Drug Administration’s (FDA’s) decision to label antidepressants with a “blackbox warning” in 2005, which was extended to include children in 2007, as a potential reason behind the increasing suicide rate about U.S. youth.

“The thing I haven’t seen discussed very much is the fear of the treatments for mental illness and the ‘blackbox warning’ that the FDA put on antidepressants many years ago [describing] the risk of increase in suicidal thought,” clinical assistant professor at the University of British Columbia and author of “This is Depression?” Dr. Diane McIntosh told the Daily Caller News Foundation.

“A lot of doctors who prescribe started thinking — without reading the details of the medication — ‘this could cause my patient to commit suicide.’ So not only are they not prescribing. They’re not making the diagnosis,” she continued. 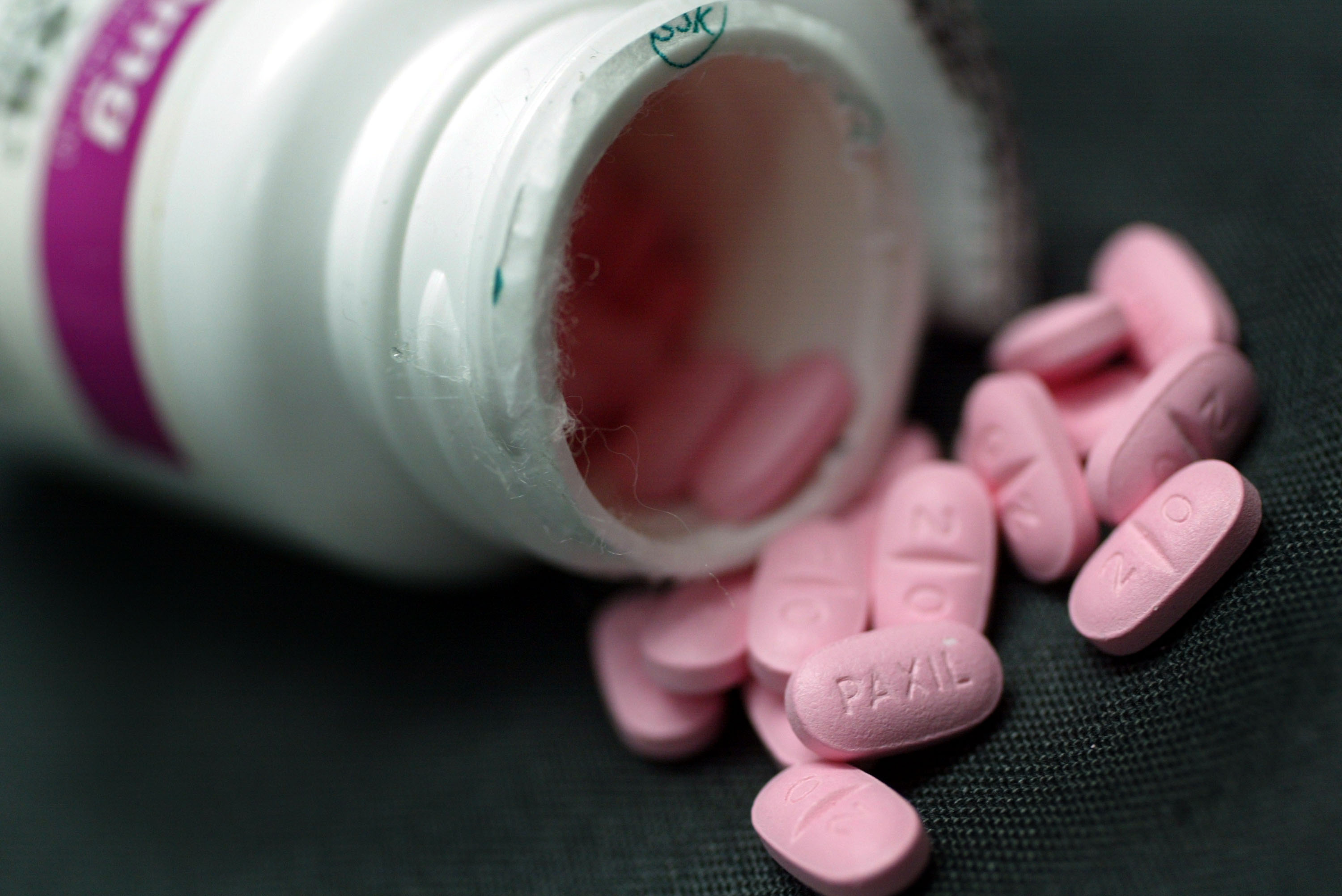 The first line on the antidepressant blackbox warning for children reads, “Antidepressants increased the risk of suicidal thinking and behavior (suicidality) in short-term studies in children and adolescents with Major Depressive Disorder (MDD) and other psychiatric disorders.”

Antidepressant prescriptions decreased by 31.0% among young adults and 24.3% among children within two years about the FDA blackbox warning was introduced, according to the New England Journal of Medicine.

National Alliance of Mental Illness Medical Director Ken Duckworth, MD, pointed to the blackbox label as a factor in the decline of prescriptions as a potential reason behind the increasing youth suicide rate.

“It should be noted that the FDA came out with a blackbox warning on the prescribing of antidepressants for adolescents and children, and prescribing has gone down since then,” he told the DCNF.

McIntosh brought up the fact that parents can’t be convinced to vaccinate their kids, let alone let them use antidepressants. (RELATED: New Study Points To Real Problems In America Causing Suicide)

“We can’t talk parents into vaccinating their kids, for heaven’s sake. There’s more research for that than anything. So, you can imagine with all the Dr. Google and negativity that’s going around, when it comes to treatment with medication, parents say, ‘I’m not giving my kid an antidepressants. That’ll kill him,'” she said.

Another Pew Research study found that 95% of children ages 13 through 17 have a smartphone or have access to one. Children in that same age demographic use YouTube most frequently — 85% — and Instagram second-most frequently at 72%, the report notes.

The social media boom started after Facebook was invented in 2004, just three years before the beginning of the CDC study in 2007 — the same year the first iPhone was released and the FDA applied the blackbox label to antidepressant medications for children.

“Certainly, the timing is impressive,” Duckworth told the DCNF. “The invention of the iPhone, Facebook and the withdrawal of antidepressants as a mainstream intervention by pediatricians. These are all correlations.”

McIntosh spoke about the impact a computer or smartphone can have on a young brain.

“I think we’re really going to reflect on this time and think, ‘What were we thinking?’” McIntosh said of social media. “When a child between the ages of six and 16 has a computer powerful enough to run a small country, they can end up with serious issues. We’re seeing an association with anxiety and depression with social media use.”

“If you didn’t get invited to a party back in the day, nobody knew. Now, you’re seeing Snapchat stories, Instagram pictures — your friends having fun while you’ve been left out. And so much of these social media [apps] are about perfection — pictures of perfection that are actually not real. No wonder kids are really struggling,” McIntosh said. 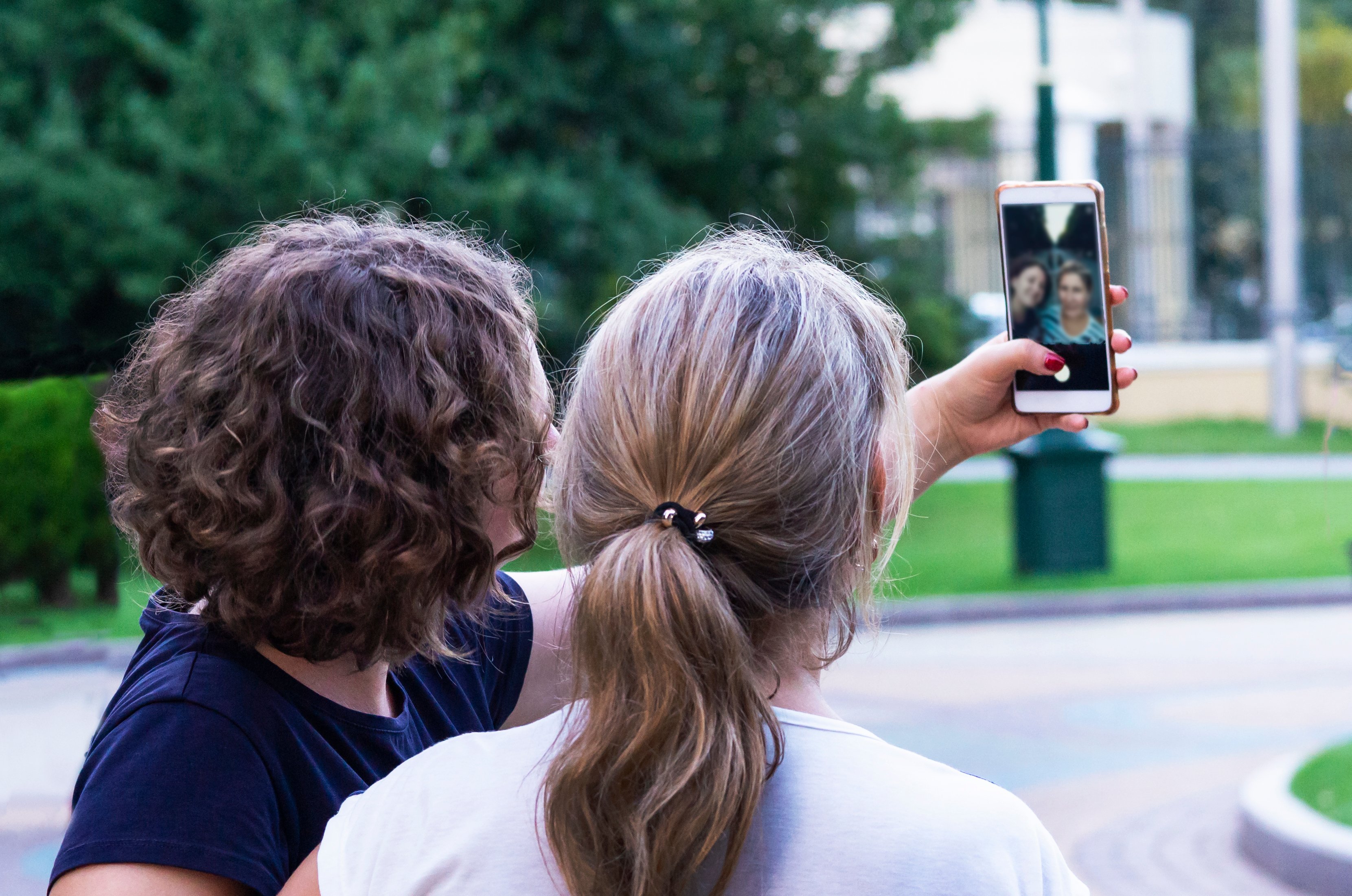 Additionally, while girls in the U.S. attempt and report considering suicide more often than boys, boys follow through with suicide more often — a phenomenon known as the “gender paradox,” which has existed for decades, according to Time Magazine.

“I think boys and girls are really suffering from this. Girls are more overt in their experience. Girls tend to have more internalizing systems — more sadness, more physical insecurities. Boys tend to be more irritable, more easily frustrated, angry and also have more substance abuse,” McIntosh explained.

Duckworth said people use the internet and social media as a form of communication, but it’s not real, human communication that is necessary for young people to develop into successful adults.

“Your hypotheses [for the increasing suicide rate among youth] would have to include bullying and shaming online as one possibility, and people who report feeling isolated. People who spend time online as a kind of communication, but it’s not human communication,” Duckworth explained.

McIntosh added that just a couple of decades ago, when someone died of suicide, no one spoke about it. Now, the stigma around suicide is changing and people are more open in their discussions about the issue, which she says is a good thing because the phenomenon of copycat suicides — or emulating the suicide of another person — is real.

Researchers have also pointed to the opioid crisis in America and the death of parents and loved ones through overdosing as reason behind the increasing suicide rate among U.S. youth, as The Washington Post reported in June.

“The potential impact of the opioid crisis on children in families where parents have died by opioid overdose or where opioid use has led to other types of trauma is a significant concern,” Garrett continued. 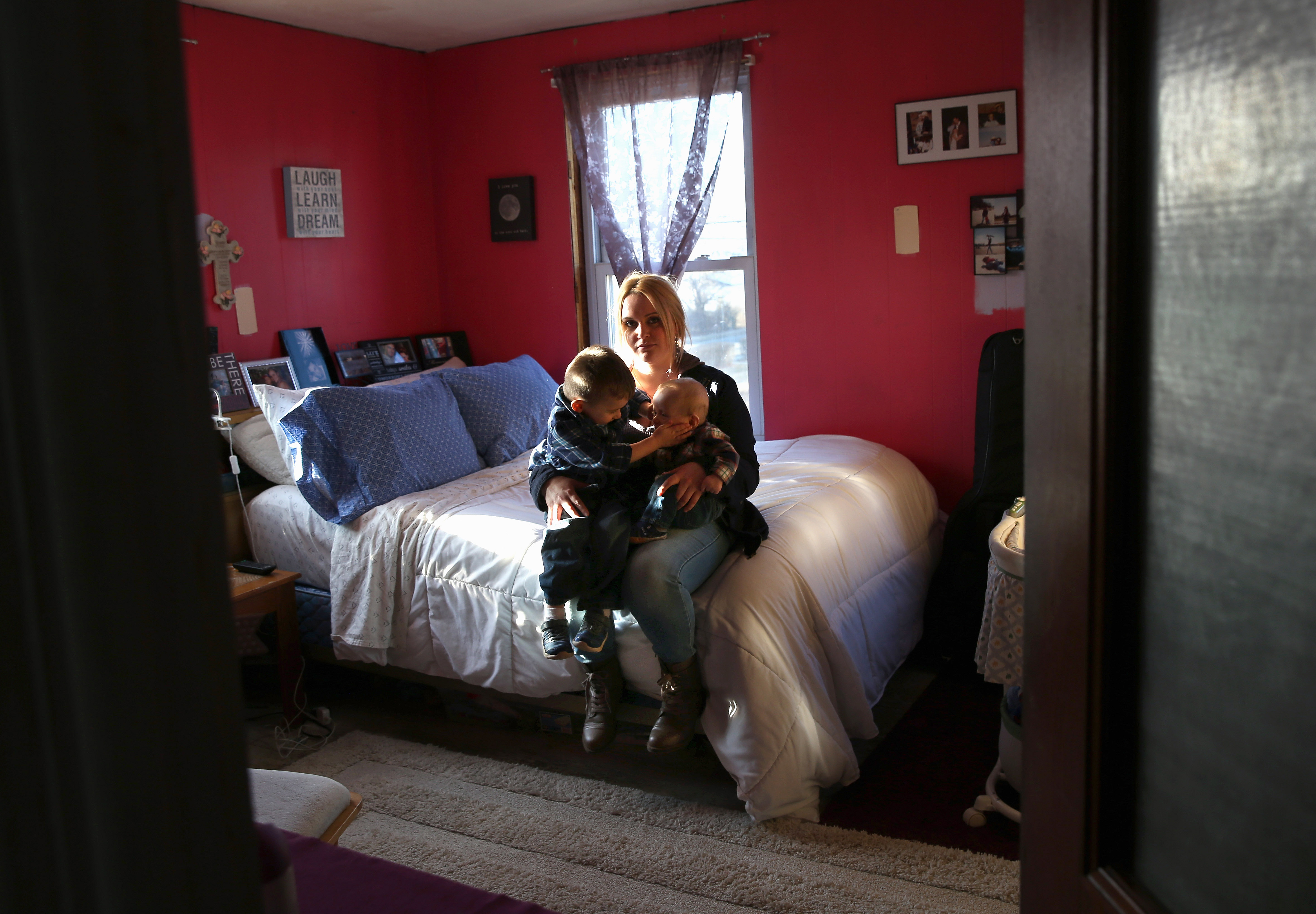 Hillary Comparone, 25, holds her children … in Plainville, Connecticut, while marking the first anniversary of the death of the children’s father Benjamin Comparone, 27, who died of heroin overdose. (Photo by John Moore/Getty Images)

“It’s an incredible area to read about that is relevant in epigenetics — this area of looking at how early life trauma impacts your risk of depression and anxiety and how that impacts your mental and physical health later in life,” McIntosh explained.

“If you have trauma in your childhood — and one of the most traumatic events is losing a parent, along with physical and sexual abuse — there is no doubt that is going to have an impact on childhood development and increase the risk of depression substantially,” she continued.

Additionally, more than 70% of homeless youth or runaways have reported a substance abuse disorder, the Addiction Center reported.

The human brain is not fully formed until about age 25, which is the reason U.S. youth aren’t allowed to legally drink or largely smoke until age 21. It’s also the reason that youth under 25 face life crises differently than adults and sometimes turn to suicide as a way out of those crises.

“Imagine you’re facing a crisis at school,” McIntosh explained. “You don’t have a fully formed brain, and you have to critically consider, think ahead about a way out of this situation, but your brain’s not developed enough to handle it. This is part of the issue.”

An underdeveloped prefrontal cortex is also what makes teenagers infamous for impulsive decision-making, even when it comes to suicide, according to a June report by The Post and Courier.

“Kids are being confronted with so much. So much stress, so many expectations — many of which are social-media driven. And they’re not able to cope and their parents don’t know what’s going on,” she continued.

Garrett similarly told the DNF that the common link between all suicides among youth “is intense emotional pain,” adding, “The fact that the brain is still developing decreases the abilities to problem-solve solutions to such painful situations or to perceive a future beyond the pain.”

TV and movies that address suicide

The Netflix original TV series “13 Reasons Why,” which was originally a book, was released to the public in 2017. Viewers debated the risk of children watching the show, with some arguing that it romanticized suicide and others arguing that it opened up the conversation regarding mental health and suicide among youth in the United States.

McIntosh, Duckworth and Garrett all brought up “13 Reasons Why” as an example of how the media portrays and discusses suicide — especially youth suicide, in this case, because the show takes place in a high school setting.

“Media has guidelines for how to cover suicide,” Duckworth told the DNCF. “’13 Reasons Why’ violated many of those guidelines. The key is to not … glamorize, not reveal or post the person’s suicide note — which is essentially the plot of ’13 Reasons Why.’ They took strides in Series Two.”

McIntosh explained that access to information about suicide through TV, movies and the internet is a double-edged sword because while talking about mental illness is “important and necessary,” the different ways in which mental-health is addressed on different media platforms can have negative impacts on certain viewers.

Garrett similarly told the DCNF that the entertainment media’s depiction of suicide “have been shown to have an influence in suicide and suicide attempts, particularly when such depictions include graphic portrayals of suicide attempts that model lethal methods.”

The Netflix logo is pictured during a Netflix event on March 1, 2017 in Berlin. / AFP PHOTO / John MACDOUGALL / Getty Images)

“Recent studies have shown an increase in suicidal behavior linked to the first season of ’13 Reasons Why,'” Garrett added.

The plot of the book and TV series is the aftermath of a young girl’s suicide. She leaves cassette tapes behind for individual classmates who played a role in her suicide. On the tapes, she explains what certain events and people led her to finally kill herself.

“‘There’s ’13 Reasons Why,'” McIntosh said. ‘There’s a lot of discussion. Kids are more likely to learn about suicide within their communities and people talking about it more, but there are some kids who will vulnerable to [the show’s message]. I still have people say to me, ‘Suicide is such a selfish act.’ I don’t understand where that comes from.”

She went on to condemn the talking point that suicide is “selfish” because those who commit suicide aren’t just depressed for themselves; they are depressed because they feel they are hurting their loved ones, too, and think suicide will alleviate some of the pain they are causing others.

“It isn’t a selfish act, and I think the most important job on Earth is parenting, and so we all need to be talking to our kids about this. If they’re watching stuff like this on TV, it’s an opportunity for parents to talk to their kids about, ‘Have you ever had these kinds of thoughts? And if you have, please know that I’m here and I’m going to help you,'” McIntosh continued.

After the show received backlash in 2017 when it was released, Netflix removed the main character’s “graphic” suicide scene and added trigger warnings to several other scenes throughout the series. The third season will have similar warnings, according to Vox.

“’13 Reasons Way’ — there has been some research that [showed] people who watched it were more likely to be interested in harming themselves. … It’s important for people in media to be responsible in their portrayals of suicide, and I think that’s a great example of how not to do it,” Duckworth said.