The Justice Department has for weeks been quietly releasing internal agency emails and documents related to the Trump-Russia probe.

The documents include correspondence related to the Steele dossier, internal discussions about news coverage of the investigation, and even an email that a lawyer for President Donald Trump sent then-Deputy Attorney General Rod Rosenstein urging an investigation of Fusion GPS.

DOJ has quietly published other batches of documents incrementally over the past several months, but the pace of publication has increased over the past week. It is unclear what is behind the uptick in transparency, though the Justice Department’s inspector general is expected to soon release a report that will touch on many of the topics discussed in the documents.

The batch of documents released Wednesday include emails that former Trump lawyer John Dowd sent to Rosenstein in late 2017 urging the Justice Department to investigation Fusion GPS, which investigated the Trump campaign on behalf of the Democratic National Committee and Clinton campaign.

At the time, Dowd was Trump’s outside attorney on Russia-related matters. He dealt directly with the special counsel’s office, which was overseen by Rosenstein.

He emailed Rosenstein and Scott Schools, the associate deputy attorney general, on Nov. 6, 2017, urging the pair to investigate whether Fusion GPS had paid journalists as part of the effort to attack Trump.

“We all now know that the entire Russian drama was and is a complete concoction by the Clinton DNC buying a phony dossier with laundered money by law firms and cut outs with Fusion GPS and former WSJ reporter Glenn Simpson to nullify the results of the Presidential election,” wrote Dowd, who linked to a Washington Times article.

“It is clear we were all duped including the DOJ and both houses of Congress.” 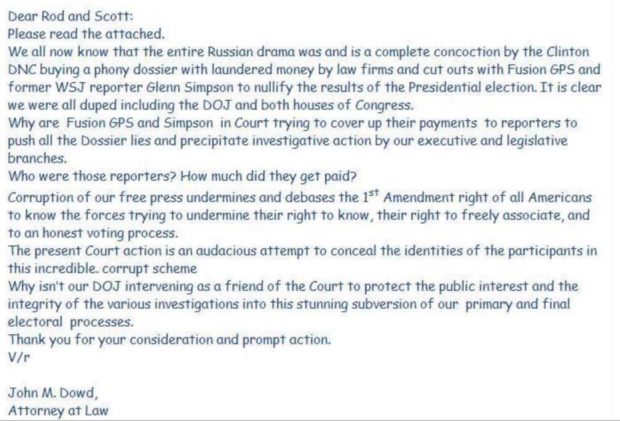 Dowd asked why the Justice Department was not “intervening” in litigation to force Fusion GPS to disclose reporters that the firm allegedly had on its payroll.

At that time, congressional Republicans had recently obtained Fusion GPS’s bank records that revealed the law firm for the DNC and Clinton campaign had paid the firm $1 million as part of its Trump investigation. Fusion GPS in turn paid Steele around $170,000, according to the documents. The records also showed that Fusion GPS paid journalists, but it remains unclear who was paid, and what work they did for the firm.

Dowd emailed Rosenstein again Nov. 9, 2017, with a link to a Wall Street Journal opinion piece entitled “Lifting the Steele Curtain,” which called the dossier “one of the dirtiest political tricks in U.S. history.”

Ohr, who was a top official in the deputy attorney general’s office, was revealed earlier that month to have had extensive contact with Steele. Ohr’s wife, Nellie, was also reported to have worked as a contractor for Fusion GPS, raising allegations of a possible conflict of interest.

“Oh good grief,” Stephen Boyd, the Justice Department’s liaison to Congress, wrote in an email to associates that linked to the DCNF’s piece.

Among the trove of recently released documents is a Feb. 1, 2017, email exchange between Strzok and Ohr.

Ohr obtained the document from Lisa Holtyn, a senior intelligence advisor at DOJ’s Organized Crime Drug Enforcement Task Force (OCDETF). He provided Strzok with a password to access the document, which the government redacted because it involves information related to “monetary instrument transactions.” 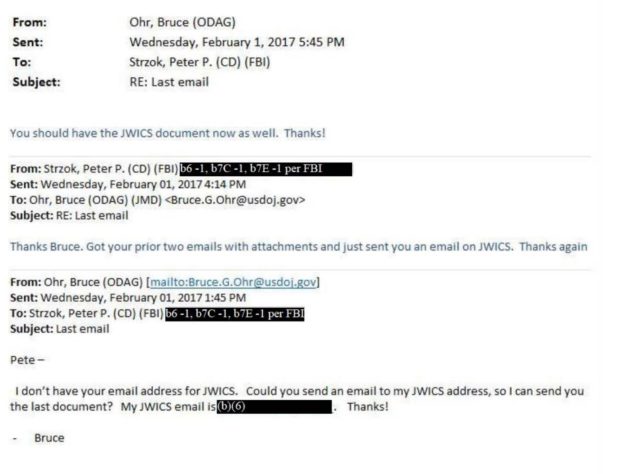 It is likely, but unclear, that the document was related to the Trump-Russia investigation.

Ohr told lawmakers on Aug. 28, 2018, that he did not know Strzok prior to the beginning of the Trump-Russia investigation, which Strzok opened July 31, 2016. Ohr testified that he met Strzok only a couple of times during the probe. The FBI used Ohr to collect information from Steele regarding his investigation of the Trump campaign.

The Justice Department also released a memo that Robert Mueller submitted to Attorney General William Barr on April 19, a day after a partially redacted version of the special counsel’s report had been made public. Mueller said in the memo that investigators had closed an investigation into whether an unidentified individual acted as an unregistered agent of a foreign country.

The name of the person is redacted, making it unclear who is being referenced in the previously unreleased document.

“The Special Counsel’s investigation closed its investigation of [redacted] for acting as an unregistered agent of a foreign government … because there was not admissible evidence sufficient to obtain and sustain a conviction,” Mueller wrote.

The memo stated Rosenstein authorized the investigation of the individual in an Aug. 2, 2017, document laying out the scope of the special counsel’s probe.

Of the four, Page was the only Trump aide to avoid charges or a guilty plea in the special counsel’s probe.