Former White House chief of staff John Kelly said he warned President Donald Trump that he could be impeached if he hired a “yes man” to replace him.

Kelly made the comments during an interview at the Sea Island Summit, a Washington Examiner-hosted conference at Sea Island, Georgia.

“I said, whatever you do — and we were still in the process of trying to find someone to take my place — I said whatever you do, don’t hire a ‘yes man,’ someone who won’t tell you the truth — don’t do that,” said Kelly, according to the Examiner. “Because if you do, I believe you will be impeached.”

The retired Marine general also expressed regret for resigning his White House post last year, seeming to throw shade at the man who replaced him, Mick Mulvaney, for not being able to keep Trump out of hot water. (RELATED: House Democrats To Subpoena 12 Other Mueller Witnesses Including Jeff Sessions And Jared Kushner) 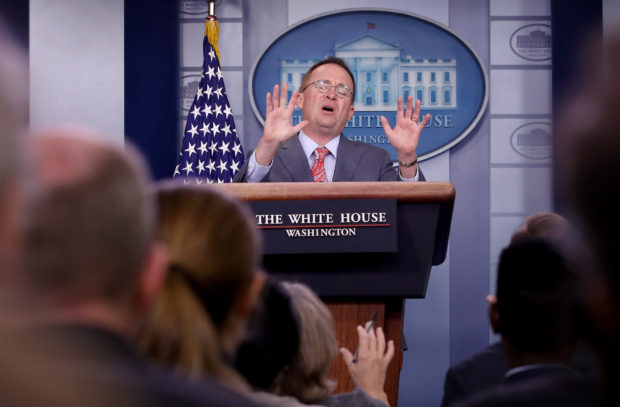 “That was almost 11 months ago, and I have an awful lot of, to say the least, second thoughts about leaving,” he said. “It pains me to see what’s going on because I believe if I was still there or someone like me was there, he would not be kind of, all over the place.”

Trump’s July 25 phone call to Ukrainian President Volodymyr Zelensky, during which he asked for an investigation into the 2016 election as well as possible criminal activity regarding Hunter Biden’s business dealings in the country, led to an ongoing impeachment inquiry from House Democrats.

“Someone has got to be a guide that tells [Trump] that you either have the authority or you don’t, or Mr. President, don’t do it,” said the former White House chief of staff. “Don’t hire someone that will just nod and say, ‘That’s a great idea Mr. President.’ Because you will be impeached.” (RELATED: We Asked Every Senator In The GOP About Impeachment. Seven Ruled It Out.)

“The system that should be in place, clearly — the system of advising, bringing in experts in, having these discussions with the president so he can make an informed decision, that clearly is not in place,” he said. “And I feel bad that I left.”