Washington Post columnist Max Boot wrote in an op-ed and tweet Monday that Islamic State leader Abu Bakr al-Baghdadi couldn’t have died a coward, as President Donald Trump said, because “he blew himself up.”

The ISIS leader died by detonating a suicide vest after a two-hour-long raid by U.S. military forces in northern Syria on Saturday evening. He killed himself along with three of his children in a manner that Trump called cowardly, adding that al-Baghdadi was “whimpering, screaming and crying.”

Boot wrote Monday in the original op-ed that al-Baghdadi wasn’t a coward because the ISIS leader, who was responsible for mass murder and terrorism, committed suicide. Al-Baghdadi led the group responsible for execution propaganda videos, including one that showed the 2014 beheading of American journalist James Foley.

He was also responsible for reportedly repeatedly raping and torturing Arizona aid worker Kayla Mueller after she was taken hostage in 2013. Mueller is believed to have died in 2015.

“The assertion that Baghdadi died as a coward was, in any case, contradicted by the fact that rather than be captured, he blew himself up,” Boot wrote in Monday’s original op-ed. He also tweeted the sentence out in a now-deleted tweet. 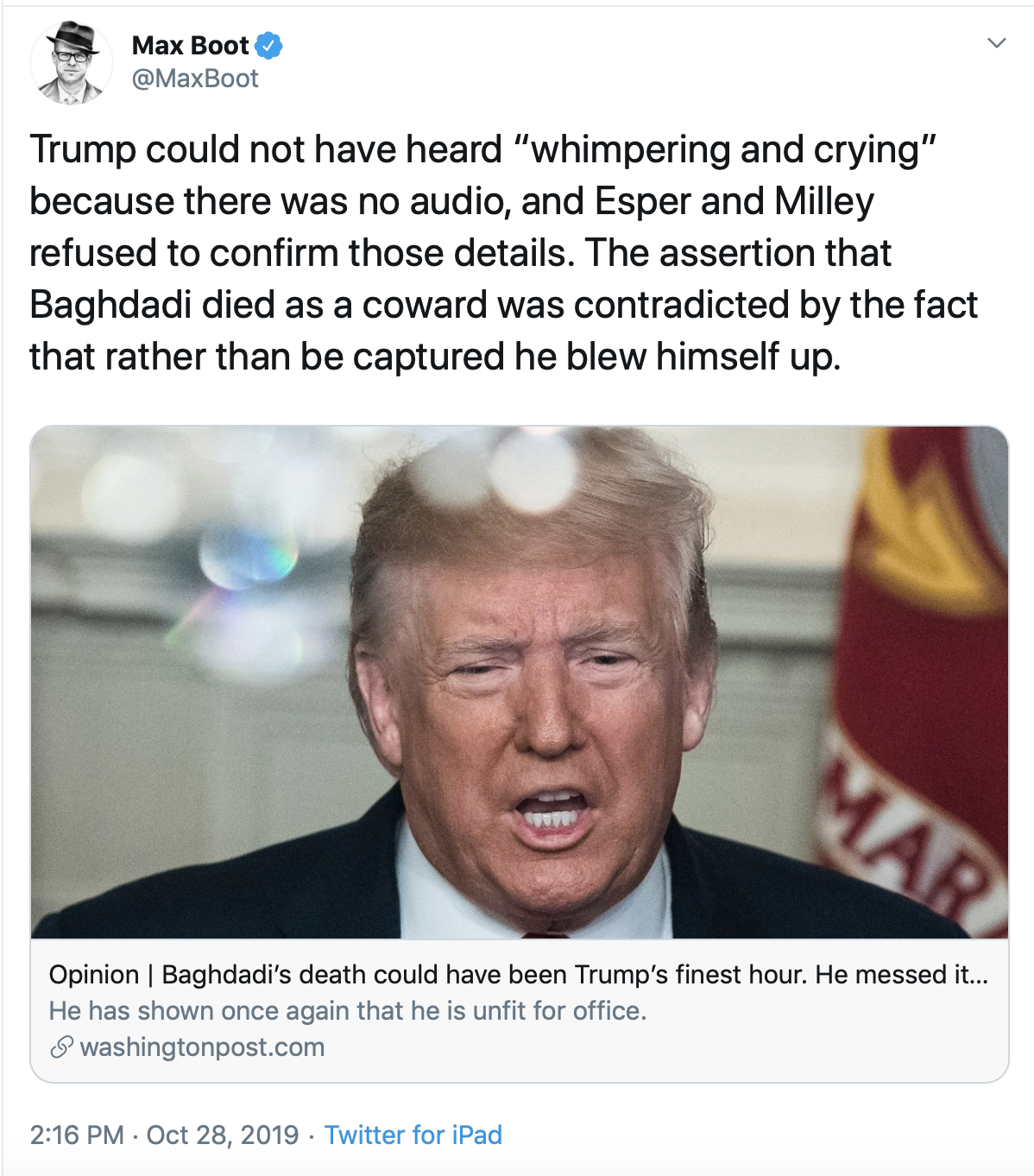 Comments on Twitter showed people expressing shock and outrage over what many viewed as support for the dead ISIS leader. Following outrage, Boot edited his story and deleted the above quote. He wrote:

(An earlier version of this column included a sentence questioning whether Trump was right to call Baghdadi a coward because he blew himself up. The line was removed because it unintentionally conveyed the impression that I considered Baghdadi courageous. As I wrote on Sunday, “Abu Bakr al-Baghdadi was, as President Trump said, ‘a sick and depraved man,’ so his removal from this earth is good news.”)

He also tweeted that the earlier version of his article “was removed b/c it wrongly conveyed the impression that I considered Baghdadi courageous. As I wrote Sun: Baghdadi was ‘a sick and depraved man.'”

An earlier version included a sentence questioning whether Trump was right to call Baghdadi a coward. That was removed b/c it wrongly conveyed the impression that I considered Baghdadi courageous. As I wrote Sun: Baghdadi was “a sick and depraved man.” https://t.co/R77v7ef0GR

Boot continued on to discuss “the most alarming parts of Trump’s news conference,” which was apparently Trump’s talk about having some troops remain in Syria to prevent them from stealing oil:

In the real world (as opposed to Trump’s dreamland), no U.S. oil company would come in to pump Syrian oil without the permission of whichever government controls eastern Syria or without long-term guarantees of security that Trump is in no position to provide. Stealing Syrian oil would be pointless, criminal and a propaganda windfall for our enemies.

Boot, also a CNN global affairs analyst, discussed al-Baghdadi’s death Monday morning as well, going on CNN’s “New Day with Alisyn Camerota and John Berman” to discuss how the death of the ISIS leader is an example of why the president shouldn’t pull troops from Syria. (RELATED: Trump Begins Withdrawing Troops From Syria)

“Right now President Trump is dismantling the infrastructure that made this raid possible – in fact made all the success we’ve enjoyed against ISIS since 2015,” Boot said. “Now he’s dismantling it by pulling our forces out of the partnership with the Kurds — betraying the Kurds.”

Boot did not immediately respond to the Daily Caller News Foundation’s request for comment.