Rep. Matt Gaetz (R-Fla.) is a new punching bag for the likes of Ellen DeGeneres‘s E.P. Andy Lassner, and actress Alyssa Milano. There was a collective groan after he published a selfie of himself flashing a slanted gummy smile at the World Series with President Trump and first lady Melania Trump Sunday night. 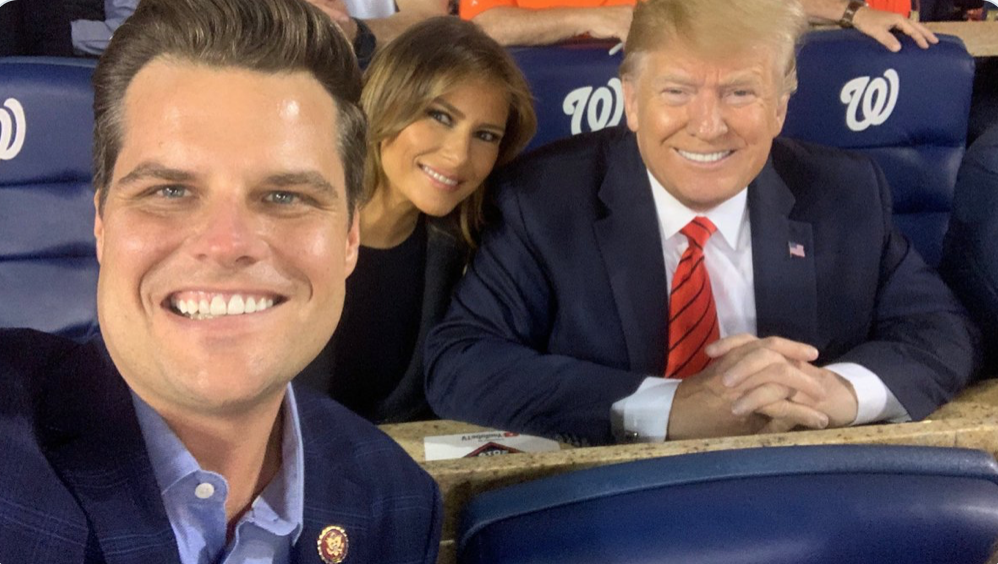 Matt Gaetz poses with President Donald Trump and his wife, Melania, at the World Series.

At least he wasn’t naked?

Lassner responded to the picture by tweeting, “OMG this fucking tool.” And on Tuesday, he began a campaign to make #MattGaetzIsAToll trend on social media.

Gaetz, 37, a familiar face on Fox News, recently barged into a closed-door impeachment hearing with a gang of GOP lawmakers. The outspoken pro-Trump lawmaker seems to enjoy being a fly in the left’s ointment. He gives as good as he gets.

“I’d ask NBC if they stand behind such a dumb/triggered/profane comment from a senior employee… But I’ve learned after reading #CatchAndKill that accountability isn’t really NBC’s ‘thing,'” he wrote Lassner. (RELATED: House Hearing Erupts After Republican Confronts Al Sharpton Over Anti-Semitic, Anti-White Remarks)

On Tuesday, the congressman acted like he was in on the “tool” joke.

Gaetz’s crack at Lassner and NBC wasn’t the smartest zinger. Influencer and New York Mag reporter Yashar Ali, a buddy of Lassner’s, fiercely went after Gaetz, asking if he understands that The Ellen Show is not actually owned by NBC. He wondered if Gaetz had confused Andy Lassner for NBC’s grizzly Andy Lack, who was recently skewered in Ronan Farrow‘s Catch and Kill for helping to squash Farrow’s story on Hollywood perv Harvey Weinstein.

Lassner has serious lifelong goals. On Tuesday afternoon, he succeeded in getting #MattGaetzIsATool to trend on Twitter.

“If #MattGaetzIsATool overtakes #NationalCatDay as the #1 trending topic on twitter, it will be very, very bad,” Lassner tweeted in a slew of anti-Gaetz sentiments.

And this: “Why is #MattGaetzIsATool the #4 trending topic in THE WHOLE WORLD? This is making me very upset.”

The situation seemed to open a valve.

The Democratic Coalition’s Scott Dworkin announced on Twitter, “Matt Gaetz is one of the worst Trump puppets in Congress. He has no interest in the truth, just spews out White House lies and acts like a full time Fox News pundit. He’s a walking stain on our country, and a complete disgrace. He’s a traitor, who should resign. #MattGaetzIsATool.”

The actress/activist Alyssa Milano used the moment to fundraise for Gaetz’s political opponent.

On Monday, Milano expressed how hard it is to not go after Gaetz with the full force of her Hollywood special powers. Really, poor Alyssa Milano.

“I have had to physically stop myself from trolling @mattgaetz all day today. IT’S BEEN SO HARD TO NOT TROLL HIM TODAY. GOD HELP ME,” she wrote.

Gaetz fired back, “Weirdest ‘thinking of you’ message I received today.”

On Tuesday, Gaetz took time out of his presumably busy congressional schedule to react to a tweet Milano wrote back in February.

MILANO: “Hey @MattGaetz, aren’t you that fringe-right Republican who supports weed and LGBTQ rights? And now you’re telling me you’ve acted in two TV shows?! You’re one of those out-of-touch Hollywood elites! SNOWFLAKE.”

Gaetz also has an enemy on ABC’s “The View.” Megyn McCain recently stung him for leading a flock of GOP lawmakers into the aforementioned impeachment hearing. “I hate political stunts across the board in general,” she said. “We elect people in order to serve in Congress.”

Lassner has received his own share of grief from all this. “Your [sic] the producer of a day time talk show. The very definition of a tool. Enjoy the next 5 years of Trump jackass,” wrote @adamha. Lassner displayed the beatdown on his feed.

“Who among us would look perfect if every ex leaked every photo/text?” Gaetz asked. (RELATED: Katie Hill Finds Surprise Ally in Matt Gaetz)

Ed Glavin, another E.P. for The Ellen Show remarked, “Hmmm. So it’s #MattGaetzIsATool Came up real quick when I searched it. Just not sure I support it. I’ll think on it.”

Glavin was responding to Lassner, who began his quest just before lunch.

Three minutes earlier, he begged the internet to help him.

“PLEASE don’t try and make this hashtag trend,” he wrote. “Thank you. #MattGaetzIsATool.”