In the deciding Game 5 of this year’s National League Division Series between the Washington Nationals and Los Angeles Dodgers, score tied in the bottom of the ninth inning, Dodgers catcher Will Smith lifted a long flyball to right field. His teammates leapt over the dugout railing in excitement … just as the ball settled in the glove of Nationals right-fielder Adam Eaton. Premature celebrations are a sports-blooper staple — the more elaborate the preening and the more obvious the shortfall, the more embarrassing the quickly shared video clip. Somewhere between point guard Kemba Walker spinning and shimmying as his shot rattles out and running back Roosevelt Nix signaling his fake-punt first down after falling a yard short lies the victory lap underway for America’s economic recovery.

By comparison to the nadir of the Great Recession, current economic conditions appear exceptional. But better-than-terrible isn’t the goal. By comparison to prior booms, this business cycle is continuing a downward trend; on many of the dimensions that matter most, current performance is below the average for recent decades (recessions included) and in some cases near all-time lows. Such results are particularly concerning at a time when the nation is running an aggressively loose monetary and fiscal policy more characteristic of a struggling economy in need of stimulus. Demanding a rapid return to America’s best economic days might be unreasonable — after decades spent systematically undermining the foundations of robust and widespread prosperity, a few years of reform can only go so far. All the more reason to avoid declaring victory, and to emphasize instead the scope and scale of recovery still required.

Plenty of good news does exist. Stock markets are near their all-time highs and the poverty rate has fallen to 11.8%, its lowest level since 2000-01 and, before that, the 1970s. Wages are increasing, and increasing faster for lower earners. Declining poverty and rising wages owe much to a tightening labor market that has brought the unemployment rate down to 3.5%, its lowest level since 1964. (RELATED: CNN’s Tapper: Is Trump Not Getting Enough Credit For The Economy?)

But dive below these headline figures and the view begins to darken. As students of public policy learned when millions of workers abandoned the labor force in the last recession, the unemployment rate counts only those actively looking for work. Behind the “unemployed” stands another population that has decided not to even look for work. Thus, a critical reference point for understanding the nation’s economic condition is the employment-to-population ratio — that is, what share of adults has a job and what share does not — and, of particular note, and particular concern, the share of prime-age men (25–54 years old) not working full-time. In September, that figure stood above 18%. 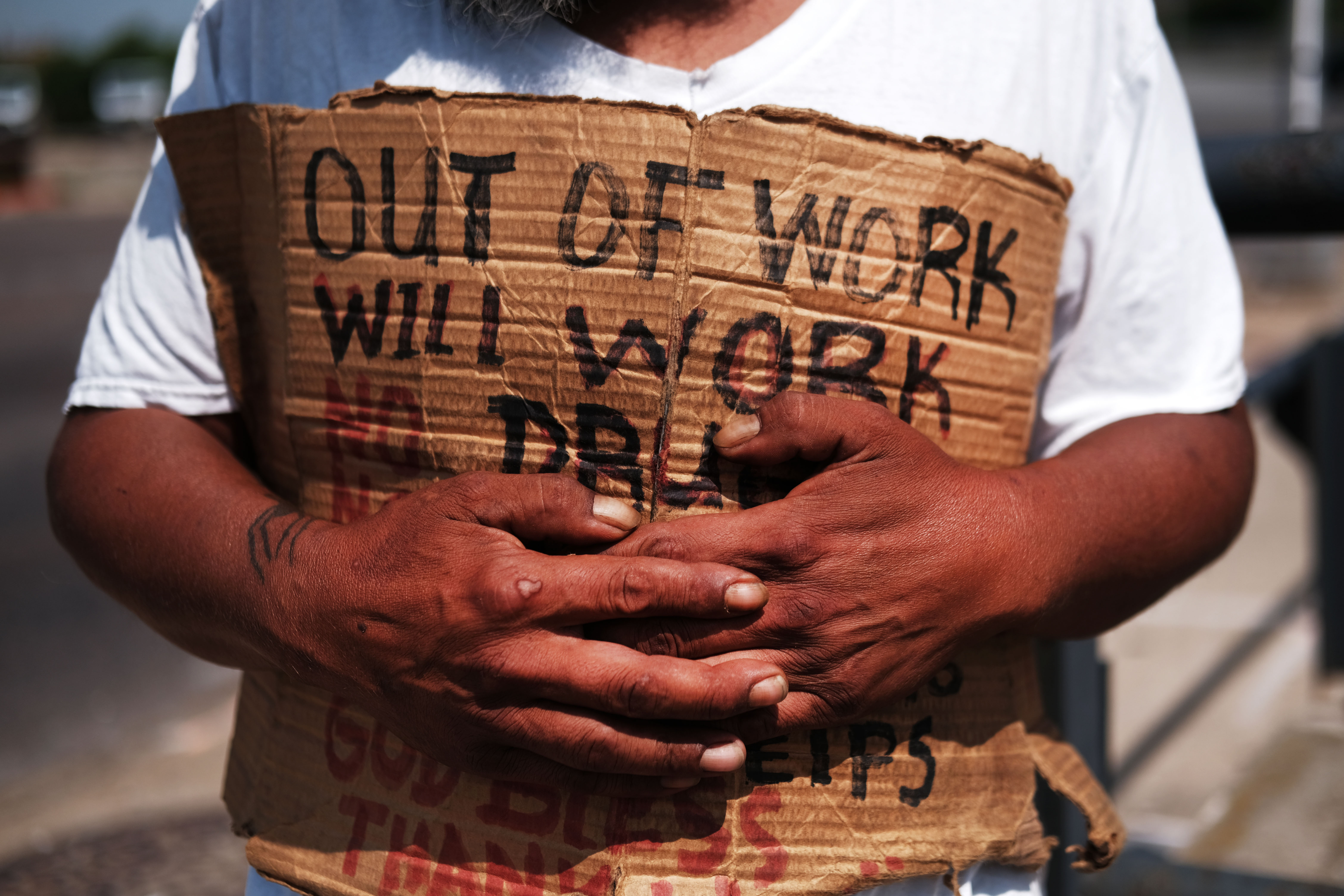 George, who is homeless, panhandles along a street in Lawrence on August 16, 2019 in Lawrence, Massachusetts. (Photo by Spencer Platt/Getty Images)

Across the economy, a variety of demographic and social factors might affect whether someone works, and there might be plenty of good reasons for people to not be working. Those rarely hold for prime-age men. One could imagine benign explanations for the present trend. Perhaps men are pursuing leisure time to enjoy rich social lives or care for their families? Not true, said Harvard’s Ed Glaeser, who noted they do watch a lot more television and sleep longer. An aging population can’t be the problem if the analysis focuses only on men aged 25 to 54, nor is a skew toward older men within the prime-age demographic at fault. Nor is the American experience materializing in other developed economies. From 1990 to 2018, the U.S. experienced the third largest decline among OECD countries in its prime-age male labor-force participation rate (behind only Italy and Denmark) and now ranks 33rd out of 36 countries. The U.S. decline of 4.4 percentage points over the period was roughly double that of its peers: the United Kingdom (2.8 percentage points), France (2.7), Canada (2.3), Japan (1.9), Germany (1.9), and Sweden (0.9).

At the pace that prime-age men returned to full-time work in the past year, it would take another decade just to return to the level of 2000. Perhaps this should not be surprising. A tight labor market does not miraculously pull people from the sidelines into the workforce, it does so by driving up the wages that employers offer. That, too, is happening slowly — and after decades of lagging performance faces an enormous chasm.

Median earnings for a man with a high school degree in 2018 were $36,500, enough to lift a family of four only 43% above the poverty line. By comparison, his earnings in 1970 would have supported them at 123% above the threshold — which would require $56,700 today. Real wage growth has improved in the past year but remains below 2%, an annual rate that would need to recur for more than two decades to close the gap of roughly $20,000.

As with employment, that wage growth looks better than the recent past but disappointing by the standard of prior booms. The 1.7% gain over the past year in average hourly wages for production and non-supervisory workers (accounting for inflation) compares favorably to the 0.5% average from 2012 through 2016. But it is unimpressive by historical standards: wage growth reached, and briefly exceeded, 2.0% in 2007; it sustained four straight years of growth above 2.0% during the period between 1997 and 2001. The average growth rate of 1.1% since the start of 2017 is no different than the average for the entire 25-year period from 1992 through 2016, including recessions.

One explanation for lagging wage growth could be the re-entry of lower-wage workers into the market, but this appears not to be the case. The Federal Reserve Bank of Atlanta tracks the change in wages for the same set of individuals 12 months apart (ignoring inflation) and reported that the median rise for the year ending in September 2019 was 3.6%, the 59th straight month yielding a value between 2.9 and 3.9%. That compares favorably to the earlier portion of the present expansion, when growth ran between 1.6% and 2.9% for the 64 months after the recession’s end. But it compares unfavorably to prior expansions: average growth was 3.9% during the 2001–2007 expansion and 5.0% from the start of the Bank’s tracking in 1997 to the end of the late-1990s expansion. Average wage growth from 1997 through 2016, again including the Great Recession, exceeds the average wage growth of the past two years.

The underlying slack in the labor market and the underwhelming wage growth are related phenomena. Economists have traditionally expected a low unemployment rate to predict high wage growth, but that relationship has weakened with the emergence of a sizable population that could work but is not looking and thus not counted as unemployed. The closer relationship has proved to be one that accounts for the “missing workers” — the economic data make most sense if the labor market is understood as not especially tight and wage growth as not especially strong. 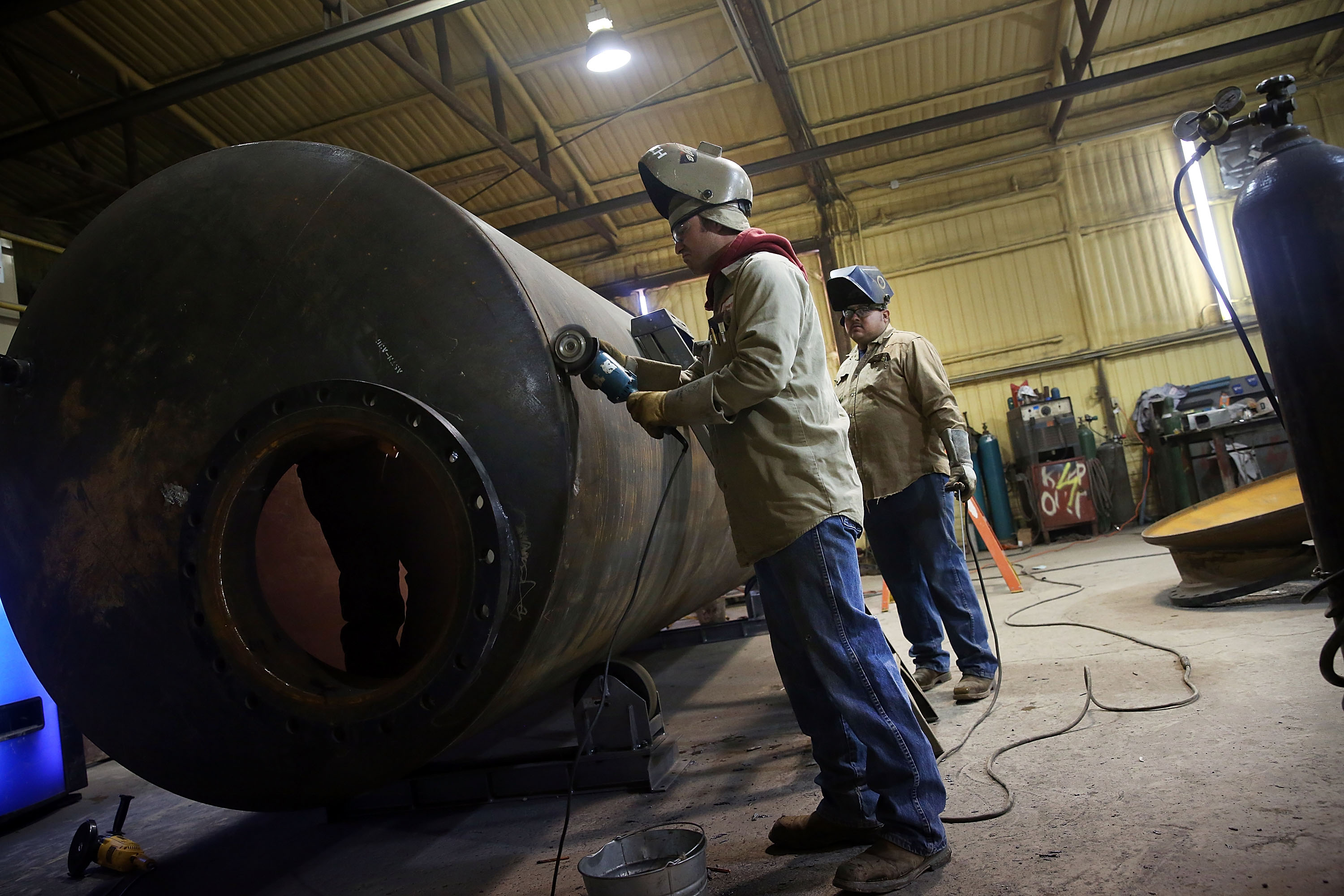 Welders for Stewarts Inc., an oilfield service company, works on a tank that will be used in the fracking industry in the Permian Basin oil field on January 20, 2016 in the oil town of Andrews, Texas.  (Photo by Spencer Platt/Getty Images)

Another challenge for wage growth is the economy’s dismaying lack of productivity growth. In the short run, employers competing for a dwindling supply of workers might bid up their wages. But in the long run, for workers to achieve sustainable gains in their earning power, they need to become capable of producing more. That’s not happening. For all the talk of technological progress and disruption and automation, the results refuse to appear in the data.

Of all the economic data, these productivity measures are perhaps most worrying. If productivity is not improving, then wage gains from even the tightest labor market will be fleeting. They cannot help but be inflationary, as employers find themselves paying more for a crucial input (labor) that doesn’t yield any more output. When the next recession hits and the labor market slackens, workers are likely to find themselves right back where they started.

As if it needed further caveat, America’s below-average boom also requires a large asterisk that notes the unprecedented macroeconomic environment in which it is working. Typically, so many years into an economic upswing, the federal budget would be approaching balance. The federal deficit declined as a share of GDP in every year of the economic expansion from 1992–2000 and generated a surplus beginning in 1998. The deficit likewise declined each year from 2004-07, narrowing to 1.1% of GDP when the financial crisis struck. By contrast, the federal deficit has been expanding each year since 2015 and reached 3.8% of GDP in 2018.

Likewise, the federal funds rate rose above 4% in 1994 and remained there until the 2001 recession. It rose steadily from 1% in 2004 to 5% in 2006 and remained there until the 2007 recession. From 2015 to 2019, the rate rose only from 0% to 2.5%, and the Federal Reserve has already begun reducing it again. A fair assessment must not only discount the economy’s performance for the cheap credit and government profligacy that is feeding it, but also recognize the risk created by “breaking the glass” now to access tools best reserved for the emergency of a downturn that will inevitably arrive. 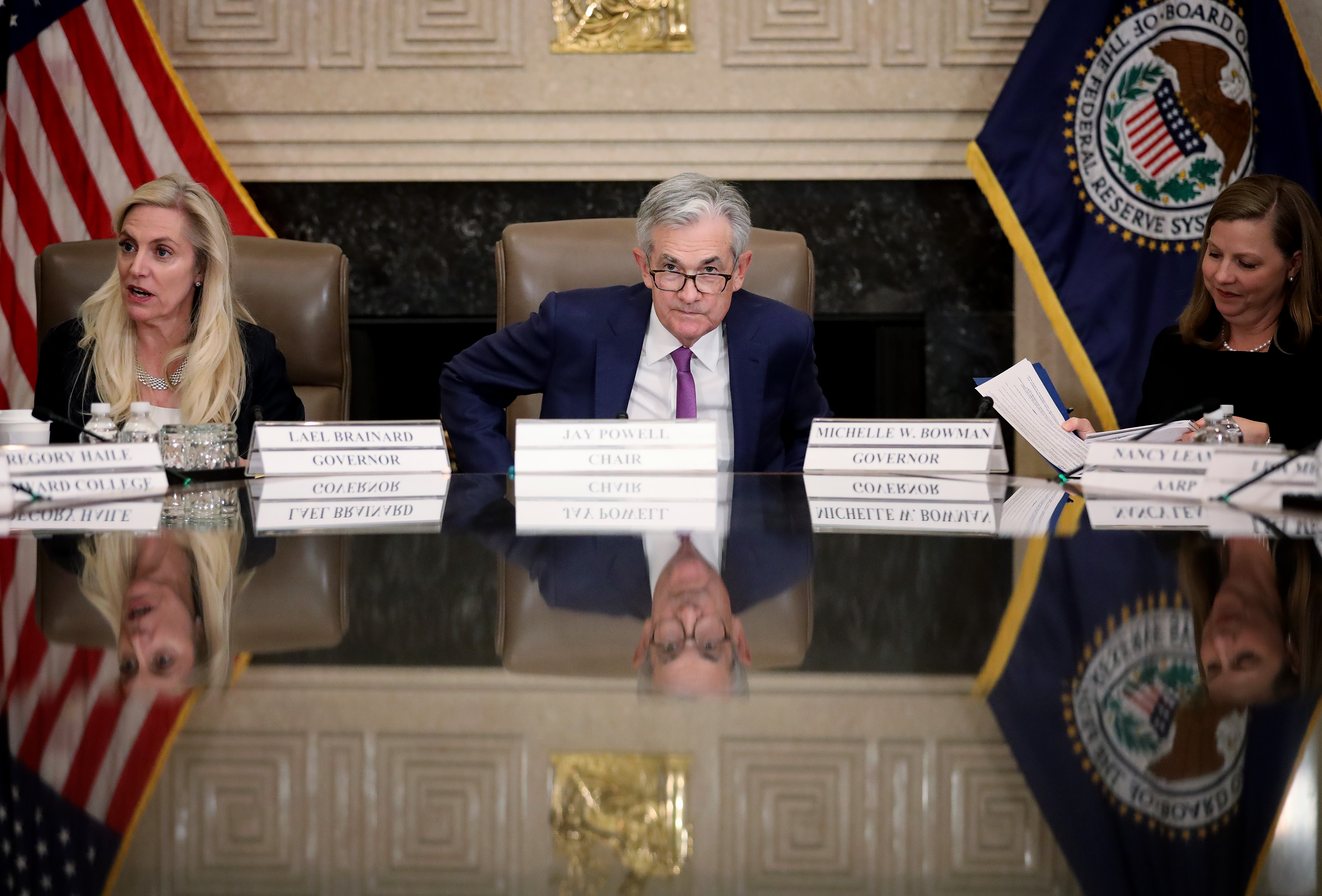 By contrast, it is difficult to credit the economy’s current strength to substantive policy reform. The long-term decline in business investment in fixed assets — down by more than half since the 1980s as a share of both GDP and corporate profits — represents one long-term challenge that the Tax Cuts and Jobs Act of 2017 (TCJA) was intended to address, but early results indicate “not much” effect. Since passage of the Act, the growth in fixed business investment has slowed. Despite an aggressive trade agenda, the U.S. trade deficit has steadily widened, growing 11% in the most recent 12 months over the prior 12, and 23% compared with two years ago.

Ronald Reagan famously asked, “Are you better off than you were four years ago?” If the American economy could answer, it would undoubtedly say, “Yes.” But for policymakers, the better question is, “Do you feel better about our economic trajectory than you did in the boom year of 2007, or the boom year of 2000?” We now know that the rosy data in those years depicted temporary peaks on a long, downward slope. We have no right to be more optimistic or complacent about the less rosy data of today. Even a temporary peak is an accomplishment, but it will prove counterproductive if it releases the pressure to confront the deeper challenges in our economic system that have reduced our expectations to the point where a routine flyball sends us leaping from the dugout with joy.

Oren Cass is a senior fellow at the Manhattan Institute and the author of a recent issue brief as part of the Institute’s Issues 2020 series: The Trump Economy: Solid but not the GOAT.