There are few rifles that offer greater utility than a bolt-action rimfire, and the .22 WMR chambering adds significant capability to that equation in terms of velocity, range and lethality. Rossi USA has made a name for itself among consumers as a maker of affordable, quality firearms, though the brand has not traditionally been associated with bolt-action rifles. Rossi’s RB22M, however, is a simple, rugged and functional magazine-fed, rimfire bolt-action chambered in .22 WMR at an attractive price.

The RB22M is made in Brazil and imported under the Rossi USA brand. This is a few-frills rifle ideal for a variety of applications; the plinker, rancher, small-game hunter and youth shooter will all find much value in this model. The heart of the RB22M is a tubular, steel alloy receiver that is simple and robust. A right-side ejection port allows access to the chamber, and a milled slot to its rear accommodates the bolt’s handle as the bolt rides forward and rearward. A round gas port at the 3-o’clock position of the chamber vents propellant gases away from the shooter’s face in the event of a case failure.

The extractor and ejector are part of a one-piece sheet metal spring that snaps over a slot in the bolt body. If the extractor ever needs replacing, swapping this part would be a process within the capabilities of most end users. The firing pin engages at the top position of the bolt face, and a red, stem-like loaded-chamber indicator is visible at the rear of the bolt. The bolt handle serves as the rifle’s locking lug, which means that the bolt throw is shorter than most two-lug designs at approximately 60 degrees. The bolt handle flares outward at the bottom and provides plenty of grip to cycle the action without being overly large. The steel bolt is removed by confirming that the rifle is unloaded and then holding the trigger to the rear as the bolt is drawn backward.

The receiver is drilled and tapped for scope mounting, and comes standard with two-piece Weaver-style bases. It should be noted that, though the bases came mounted on our test rifle, they were not torqued to spec—always confirm that mounting screws are tight before adding an optic. The RB22M does not feature iron sights. The barrel is of a medium profile for a rimfire, and tapers only minimally from the breech to the 0.608″ muzzle diameter. The crown is recessed approximately 0.065″ from the muzzle, which should protect it from most impacts.

The RB22M’s thoughtful features include (l. to r.): a crossbolt safety and magazine release (arrow), Weaver-style bases, a cocked-striker indicator and a recessed muzzle crown.

–
The trigger guard is polymer, and a crossbolt safety is positioned just forward and above the guard’s opening. The safety locks the trigger and prevents any movement. A cast-metal magazine release lever articulates forward from the leading edge of the trigger guard. A five-round steel magazine locks securely into the magazine well and is compatible with both Rossi’s .22 WMR and .17 HMR models. If disassembly beyond removal of the bolt is desired, two Phillips head action screws, fore and aft of the trigger guard, allow the action to be removed from the stock.

The synthetic stock is well-designed and incorporates a cheekpiece of sufficient height to properly align the shooter’s eye with a mounted scope. The pistol grip is fairly vertical in shape, which makes it comfortable to shoot both prone and from the bench. Panels are molded into the stock at the pistol grip and fore-end to provide a nonslip surface, and the texture does the job without being overly abrasive. The buttplate is a simple polymer model, appropriate for this rimfire’s lack of recoil. Sling swivel studs are threaded into the stock near the toe and fore-end tip. Though the injection-molded stock is fairly flexible and can easily touch the free-floating barrel if pressure is applied, we saw no indication that it had a negative effect on accuracy during our testing. Reinforcing the fore-end with epoxy would likely eliminate the flexibility.

All of the metal work on the rifle was finished with a traditional hot blue, and the satin finish was consistent throughout the rifle save for the bolt handle, which has a matte look. Overall, the fit and finish of the rifle is quite good for a firearm that retails south of $200. The most impressive aspect of this Rossi rifle was the trigger. Our example broke cleanly at 3 lbs., 5 ozs., a feat that many expensive center-fire rifles would do well to emulate. Ten-shot, 50-yd. groups ranged from good to great, with Hornady’s 30-gr. V-Max load proving to be the most accurate of the three loads tested. 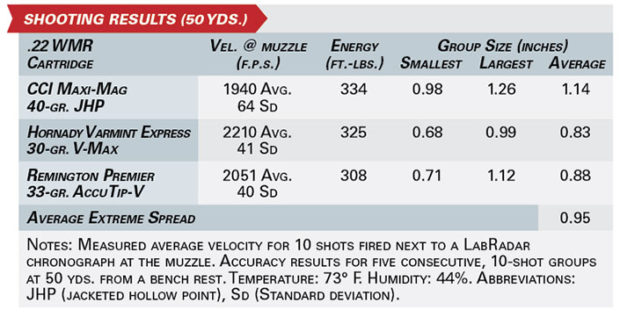 –
The Rossi was simple and straightforward to operate, and the controls will be familiar to anyone comfortable with a bolt-action repeater. But for one failure to fire out of more than 150 rounds expended, the rifle performed flawlessly. That round fired after the bolt was used to re-cock the rifle, and the ammunition could have been the source of the problem. Feeding was not always smooth, but we encountered no failures to feed. Empty cases were ejected with authority. Recoil was inconsequential and muzzle blast was minimal.

The Rossi RB22M is a serviceable and accurate rifle available at an immensely reasonable price. Its functional elements, particularly its accuracy and good trigger, are on par with many premium-brand firearms in today’s marketplace. As a truck gun, utility rifle, varmint-hunting arm or general-use rimfire, the Rossi has a lot to offer.