The case of James Younger, the seven year-old Texas boy whose situation has captured the attention of America, is more complicated than some news outlets have made it seem. James was born a boy but is now embroiled in a dispute between his parents, Jeff Younger and Anne Georgulas. The father, Younger, insists that James is, in fact, a boy, while the mother, Georgulas, is adamant that James is actually a girl. Georgulas’ goal is to have James actively be “transitioned” into a girl.

Depending on the ideology of the outlet publishing the story, James’ father and mother have both been alternately portrayed as the villain in this story. However, it seems like that neither of James’ parents seem to be entirely unimpeachable characters. 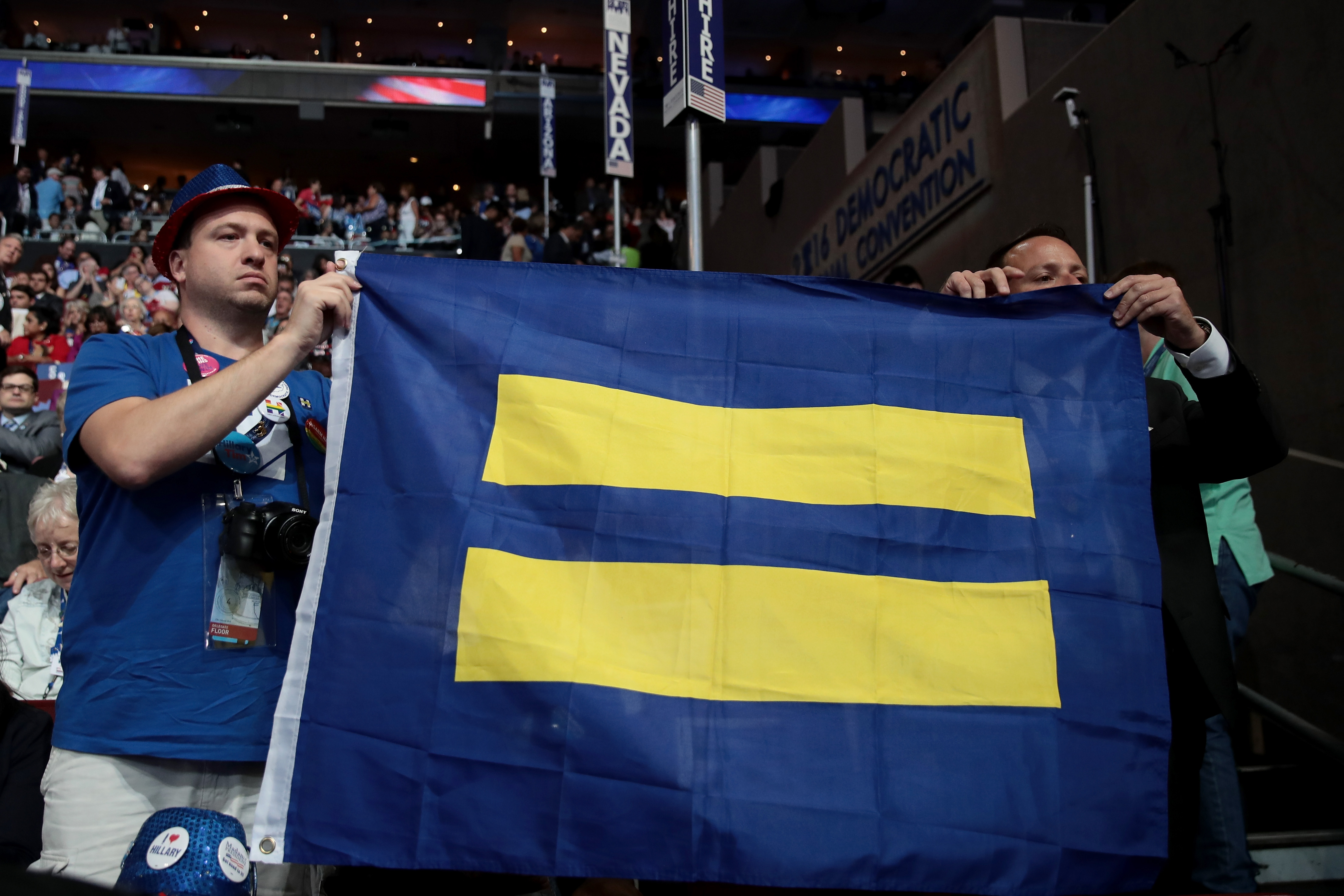 PHILADELPHIA, PA – JULY 28: Attendees hold up a flag with the Human Rights Campaign logo during the fourth day of the Democratic National Convention at the Wells Fargo Center, July 28, 2016 in Philadelphia, Pennsylvania. (Photo by Drew Angerer/Getty Images)

Younger and Georgulas have not been together since 2015 and had their marriage legally annulled in 2016. During the annulment proceedings, James’ mother, Anne Georgulas, was awarded roughly 45,000 dollars in damages because Younger had fraudulently purchased a truck through his wife’s company. Georgulas alleged that Younger had spun an heavily fictitious story of his background prior to them marrying. Younger had apparently told her that he had spent multiple years earning six figures at fortune 500 companies, had been a college professor, and had only been married once, among other things.

In reality, Younger had been married twice, had not earned a college degree and only once in his life had an income that surpassed six figures. Younger had also been discharged from the army for “an admission of homosexuality” according to court records.

Following their separation, the parents were joint managing conservators of their children. However, Georgulas disagreed with Younger’s decision to continue raising James as a boy and asked the court to restrict his rights and force him to “affirm the child in question’s identity as a girl.” Younger responded with a counterpetition, asking the court to make him the “sole managing conservator.” The jury did not side with Younger, delivering a 11-1 decision on Oct. 24 that gave Georgulas the right to make all “medical and psychological decisions for the couple’s children.”

However, Judge Kim Cooks ruled shortly thereafter that both parents will continue to have joint control of all medical decisions for the child, with the addition of a third party arbitrator who will be responsible for making medical decisions if a situation arises where the parents are unable to come to an agreement. (RELATED: Biologically Male NCAA Runner Named Conference Female Athlete Of The Week) 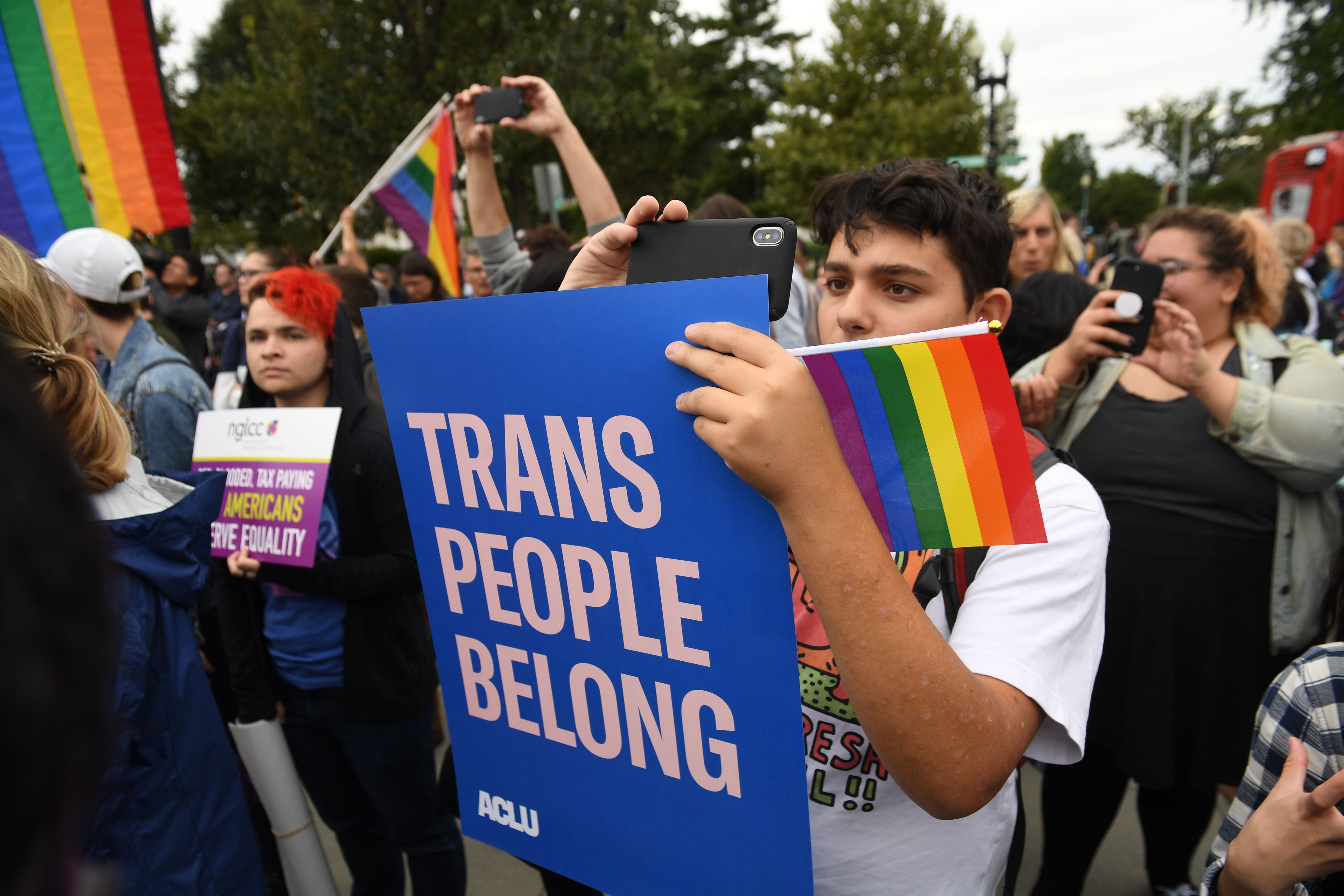 Demonstrators in favor of LGBT rights rally outside the US Supreme Court in Washington, DC, October 8, 2019, as the Court holds oral arguments in three cases dealing with workplace discrimination based on sexual orientation. (Photo by SAUL LOEB / AFP) (Photo by SAUL LOEB/AFP via Getty Images)

Witnesses through the court proceedings have said that when in the presence of the father, James acts as a boy, despite being treated as a girl, including using the girls’ restroom, at school. Sarah Scott, who describes herself as the mother of James’ best friends, has been quoted as saying, “Over the past year, I have observed that James is blissfully happy as a boy. He loves to march around outside and yell, ‘we are the only boy scout troop’ or ‘I’m the Leader of the wolf pack!’ and ‘Mrs. Sarah, I don’t need a shirt! It’s hot! And boys don’t have to wear shirts if they don’t want to! Isn’t that awesome!'”

The case has garnered national attention. Republican Texas Senator Ted Cruz tweeted Oct 23, “A 7-year-old child doesn’t have the maturity to make profound decisions like this. The state of Texas should protect this child’s right to choose—as an informed, mature person—and not be used as a pawn in a left-wing political agenda. #ProtectJamesYounger“

A 7-year-old child doesn’t have the maturity to make profound decisions like this. The state of Texas should protect this child’s right to choose—as an informed, mature person—and not be used as a pawn in a left-wing political agenda. #ProtectJamesYounger

He also described the situation as both “horrifying and tragic,” calling it, “nothing less than child abuse.”

This is horrifying & tragic. For a parent to subject such a young child to life-altering hormone blockers to medically transition their sex is nothing less than child abuse.https://t.co/sl8VcBgfTD via @nypost

Republican Texas Governor has gotten involved as well. He said that the case is being looked into by both the Texas Attorney General’s Office as well as the Texas Department of Family and Protective Services.

FYI the matter of 7 year old James Younger is being looked into by the Texas Attorney General’s Office and the Texas Department of Family and Protective Services. #JamesYounger

As the case proceeds, Jeff Younger still has a say in the medical decisions relating to his son, but given his parent’s inability thus far to come to any sort of mutual decision, James’ fate will likely come down to the decisions made by the third party arbitrator.