The White House’s top official for European affairs told Congress on Thursday that he was not concerned that “anything illegal” was discussed during the July 25 phone call between President Trump and his Ukrainian counterpart that is at the center of Democrats’ impeachment inquiry.

“I want to be clear, I was not concerned that anything illegal was discussed,” the official, Timothy Morrison, said in an opening statement reviewed by the Daily Caller News Foundation.

Morrison, who served as senior director for European affairs at White House and National Security Council, was one of several officials who listened in on the phone call between Trump and Volodymyr Zelensky, the president of Ukraine.

He is only the second witness called by Democrats to testify in the impeachment push to have been present on the phone call, in which Trump asked his Ukrainian counterpart to consider investigating former Vice President Joe Biden and his son, Hunter Biden. Lt. Col. Alexander Vindman, the top Ukraine official on the National Security Council, testified on Wednesday.

In contrast to Morrison, Vindman said he was concerned about what he heard on the Trump-Zelensky call. He said that he “did not think it was proper” for Trump to ask Zelensky about the Bidens.

The phone call and Trump’s actions overall towards Ukraine this summer are the subject of Democrats’ impeachment investigation. Democrats, aided by a CIA whistleblower’s complaint that centers on the phone call, allege that Trump abused his office through a possible quid pro quo to force Zelensky to open investigations into Joe and Hunter Biden in exchange for military aid. (RELATED: Diplomat Testifies He Was Told Ukraine Aid Was ‘Dependent’ On Biden Investigation)

Trump has defended his interactions with Zelensky, and has described their phone call as “perfect.”

Morrison, who joined the National Security Council on July 9, 2018, said a memorandum of the phone call that the White House released on Sept. 25 “accurately and completely reflects the substance of the call.” Some Democrats and liberal pundits had speculated that the White House edited the transcript of the phone call in order to mask wrongdoing on the part of Trump. 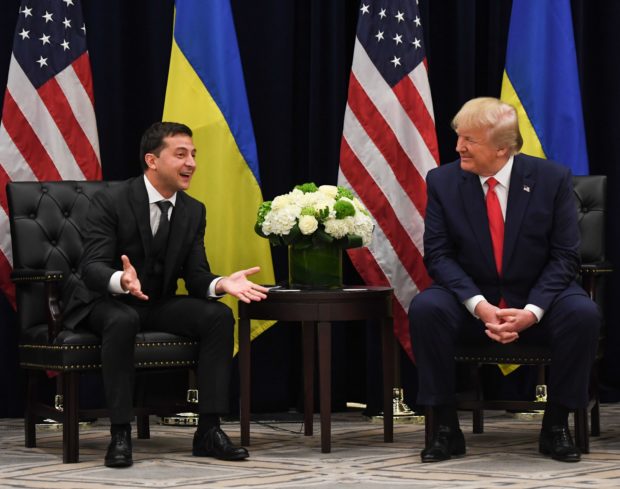 Morrison said that after the call, he contacted a National Security Council legal adviser and his deputy to review the transcript of the Trump-Zelensky exchange.

According to the transcript, Trump exchanged pleasantries with Zelensky, and then asked for a “favor” by looking into Ukraine’s possible involvement in the 2016 U.S. election. Trump also later asked Zelensky to consider looking into whether Joe Biden intervened in 2016 to help Burisma Holdings, a Ukrainian natural gas company that had Hunter Biden as a board member.

Morrison said in his opening statement that he had three concerns about potential leaks of the transcript of the phone call, which was placed on a top secret computer system at the White House.

Morrison did not say definitively whether he believes that Trump used military aid as a quid pro quo to prompt investigations of the Bidens. But he did say that he did not believe that the Ukrainians “had any knowledge” that the aid was being withheld until Aug. 28, when a story about the assistance was reported in Politico.

In that article, Politico reported that the State Department and Defense Department had put a freeze on hundreds of millions of dollars in aid to Ukraine for reasons unknown. It has since been reported that Mick Mulvaney, the acting White House chief of staff, ordered the freeze a week before Trump spoke with Zelensky.

Morrison, who said he plans to leave the National Security Council soon, testified that he was aware that Trump had concerns over corruption in Ukraine, as well as that European nations had not contributed enough security assistance to the former Soviet republic in its fight against Russia.

In defending his Ukraine-related actions, Trump has said that he was hesitant to provide security assistance to Ukraine because of rampant corruption in the country. Trump also said in his call with Zelensky that he was frustrated that European countries like Germany and France had not paid their fair share to help Kiev.

Morrison also said that his predecessor, Fiona Hill, had informed him that Gordon Sondland, the ambassador to the European Union, and Trump lawyer Rudy Giuliani were working to convince Zelensky to open an investigation into Burisma.

Morrison said that he “did not understand” why Sondland would be involved in Ukraine policy decisions.

Giuliani has been pushing for investigations into the Bidens’ links to Ukraine since late last year. Two of his associates in that endeavor, Igor Fruman and Lev Parnas, were indicted on Oct. 10 on campaign finance charges.

Text messages released during the impeachment inquiry show that Giuliani, Sondland and other diplomats discussed ways to convince Zelensky to publicly announce investigations of Burisma and possible Ukrainian election meddling.