Editor’s note: What follows is an excerpt from Guy Snodgrass’ new book Holding The Line: Inside Trump’s Pentagon with Secretary Mattis (Here on Amazon). Sndograss, Mattis’s former chief speechwriter and chief of communications, chronicles his time under Gen. James Mattis while the latter served as Secretary of Defense during the administration of President Donald Trump from January 2017 to January 2019. Snodgrass provides insight into Gen. Mattis’s views on the U.S. military, the position of the U.S. in the world and on the president.

“In machine-gun fashion, he laid out the primary issues affecting America’s military: ‘rapid technological change, the negative effects on military readiness resulting from the longest continuous stretch of combat in our nation’s history, defense spending caps, and operating for nine out of the last ten years under continuing resolutions have created an overstretched and under-resourced military.’ Mattis was adamant that Congress needed to get its act together, having watched the military languish during the last few years of his time in uniform.

Mattis also pointed out that ‘our military’s role is to keep the peace for one more year…one more month…one more day…to ensure our nation’s diplomats who are working to solve problems do so from a position of strength.’ He noted with pride that ‘this is our nation’s first national defense strategy in ten years.’ What Mattis really wanted to reinforce was the military’s renewed sense of direction, saying, ‘Today, America’s military reclaims an era of strategic purpose.’ This speech represented an opportunity to not only roll out the new strategy, but to restore the confidence in the armed forces — for the public and for members of the military alike. 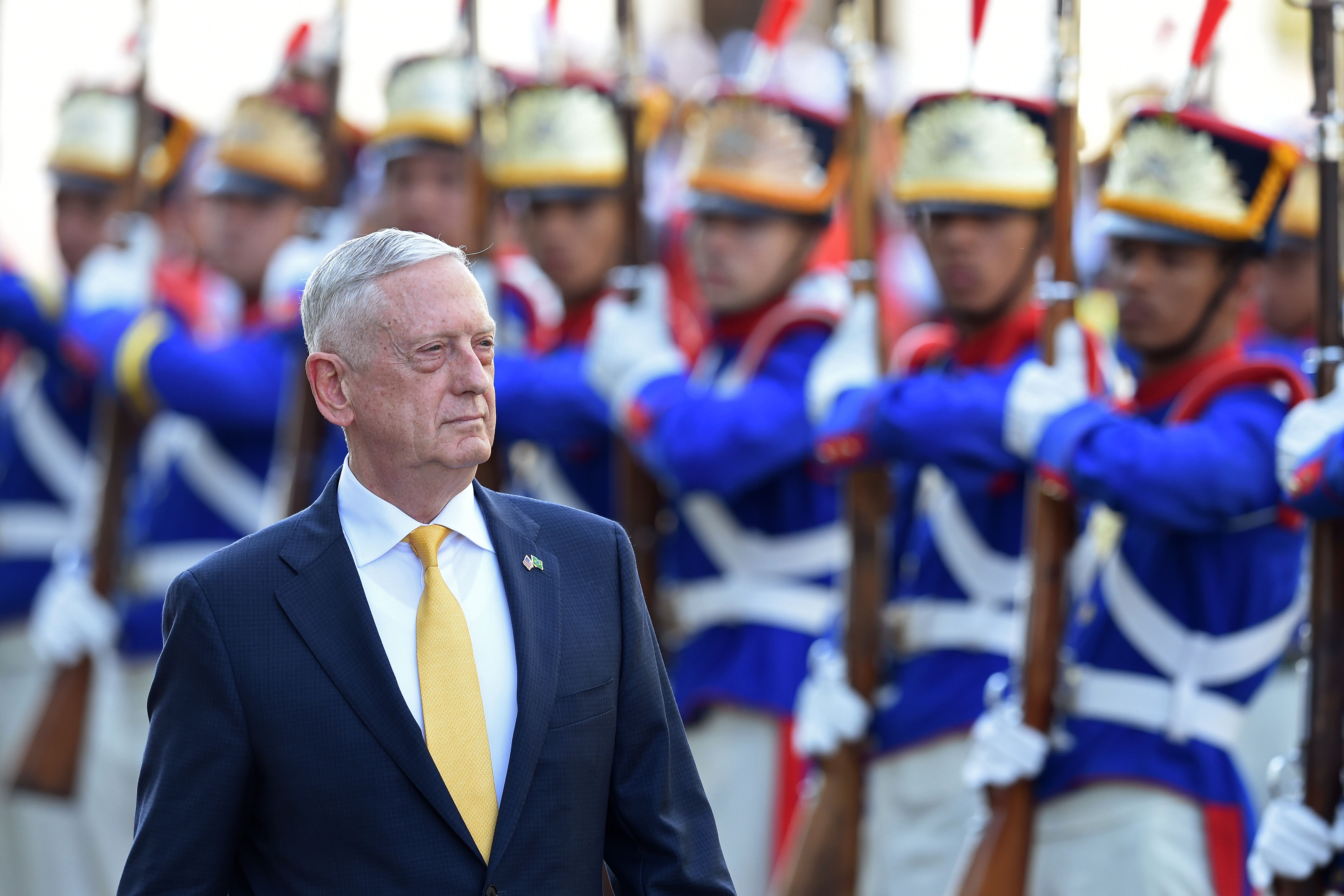 U.S. Defense Secretary Jim Mattis reviews the honor guard on his arrival at the Ministry of Defense in Brasilia, to hold a meeting his Brazilian counterpart Joaquim Luna e Silva, on August 13, 2018. (Photo by EVARISTO SA / AFP/ Getty Images)

Catching everyone’s attention was his declaration that the return of ‘great power competition — not terrorism’ represented ‘the primary focus of US national security.’ This was a tectonic shift in focus after seventeen years of continuous warfare against terrorism. He further warned his audience to resist the temptation to lower its guard, as ‘America has no preordained right to victory on the battlefield.’ (RELATED: How The Army Tried To Avoid Telling The Truth About Women In Ranger Training)

Mattis concluded with a line that I would inject into our budget testimony on Capitol Hill. ‘For too long we have asked our military to stoically carry a ‘success at any cost’ attitude. Loyalty must be a two-way street. We must remain faithful to those who voluntarily sign a blank check to the American people, payable with their life.’ It was a tough reminder to Congress and the public that failure to adequately fund the military poses real risks. The reaction from the audience, the media, and the punditocracy was near-universally positive. They loved Mattis’s personal embrace of the strategy. They admired its clarity and brevity, with Brookings Institution saying, ‘At first glance, what is most notable about the NDS [National Defense Strategy] is its length and its tenor. At eleven pages, the NDS is approximately 80 percent shorter than its most recent predecessor…To their credit, Secretary Mattis and his team largely avoided the ‘Christmas tree phenomenon’ that plagues so many strategies, wherein every participant puts his or her own ornament — or pet issue — in the document. Remarkably, the NDS manages to be both pithy and blunt.’

Releasing the strategy merely set the stage for a much more serious fight: restoring predictable and adequate DOD funding. The military had seen its annual budgets decrease precipitously during the preceding five years due to sequestration. The lack of funding and spare parts meant planes being grounded, ships not put to sea, and troops lacking training. In short, a military charged with fighting a nonstop war against terrorism and providing global presence was denied the very funding it needed to succeed. The military was overused and underfunded, leading to increased accidents and a large number of talented individuals heading to the exits for greener pastures. 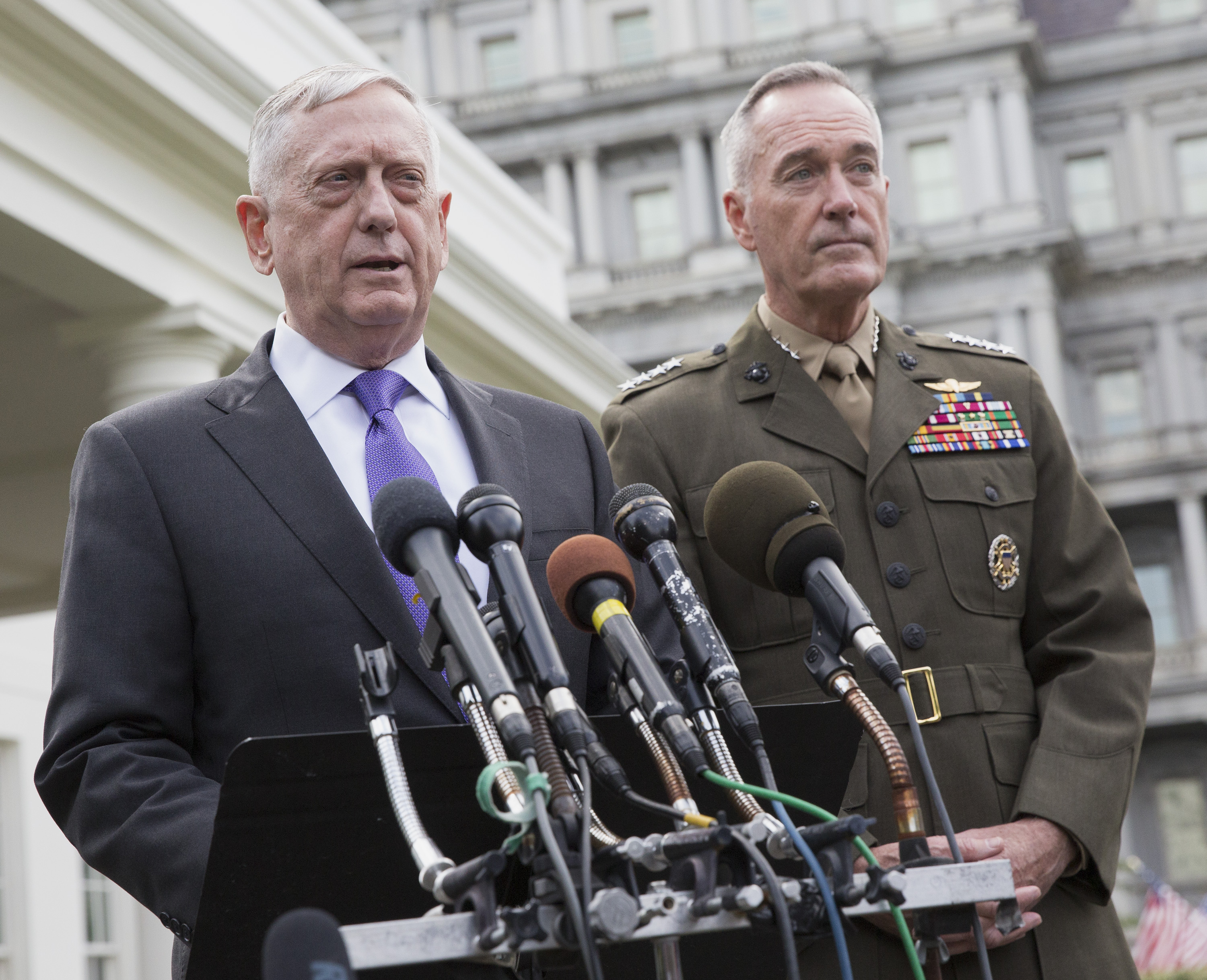 WASHINGTON, DC – SEPTEMBER 03: (AFP OUT) U.S. Secretary of Defense James Mattis (L) makes a statement at the White House on a possible military response to the recent North Korea missile launch, with Chairman of the Joint Chiefs of Staff Joseph Dunford on September 3, 2017 in Washington, DC. (Photo by Chris Kleponis – Pool/Getty Images)

Restoring the military’s budget was now Mattis’s top priority. The defense strategy was largely a means to that end, providing the department the justification it needed to increase congressional support. As Mattis had said, ‘a strategy without the budget to enact it is just a hallucination.’ We needed to raise military spending to levels that aligned with our requirement to fight the war on terrorism while also repairing years of decay and preparing for more difficult adversaries. (RELATED: Trump Announces Death Of Another Top ISIS Leader)

President Trump had also pledged to restore the military during his campaign, saying, ‘We want to deter, avoid, and prevent conflict through our unquestioned military strength.’ All the good intentions were in place — now it was time to drive them home.

Mattis had campaigned for restored funding and budgetary certainty throughout his first year, so much of the groundwork was already laid. Congressional Democrats were largely opposed, as they wanted a one-for-one increase to match increased domestic spending with increased military spending. Mick Mulvaney, the director of the Office of Management and Budget, was also seeking to hold the defense department to a lower ‘top-line’ budget, as were other Republicans concerned about ballooning federal deficits and the national debt.

Mattis knew that we had to be relentless about restoring military spending, especially since the latest continuing resolution was expiring in February.

Our first goal was alignment. Everyone had to be on message.

Mattis had previously briefed Trump on his proposed budgets for the department. Despite his reservations, Mulvaney agreed to a significant increase for 2018’s budget, lifting defense spending to $700 billion with a smaller increase in 2019 to $716 billion to offset inflation. The military would have the funding and the certainty needed to invest in the big programs required for the renewed threats posed by China, Iran, Russia, or North Korea.”

From HOLDING THE LINE: Inside Trump’s Pentagon with Secretary Mattis by Guy M. Snodgrass, US Navy (Ret), published by Sentinel, an imprint of The Penguin Publishing Group, a division of Penguin Random House, LLC.  Copyright © 2019 Guy M. Snodgrass

Guy “Bus” Snodgrass recently served as director of communications and chief speechwriter to Secretary of Defense James Mattis. A former naval aviator and F/A-18 pilot, he served as a commanding officer of a fighter squadron based in Japan, a TOP-GUN instructor, and a combat pilot over the skies of Iraq as part of his twenty-year navy career. He lives with his family in Virginia.

1
'Indefensible And Grotesque': Jonah Goldberg Slams Kayleigh McEnany, And Chris Wallace Joins In
Media
2
These Are The Most Illogical Coronavirus Restrictions Still In Place
Analysis
3
Trump Says He Has Chance 'To Break The Deep State,' Teases New Revelations From Declassification
Politics
4
Democratic Rep. Ilhan Omar Believes Tara Reade, Says Justice 'Should Never Be Denied'
US
5
There's A New Movie On Netflix With Adam Sandler, And It's A Nonstop Rush Of Adrenaline
Editorial