Planned Parenthood is fighting to keep the last abortion clinic in Missouri open as health officials say that the clinic violated mandated health requirements and that the clinic refused to cooperate with mandated inspections.

The closure of the clinic would make Missouri the first state without a functioning abortion clinic since 1974.

Legacy media outlets follow the clinic’s case closely and reported during a four-day hearing last week that a top official tracked the periods of the clinic’s patients in a spreadsheet — a move the Missouri Department of Health and Senior Services (DHSS) denied, saying that it was DHSS regulators who investigated botched abortions at the clinic and used information the clinic provided that included dates of the patients’ last menstruation.

Planned Parenthood announced on May 28 that the clinic was in danger of being closed. The organization, which is the largest abortion provider in the U.S., accused DHSS of refusing to renew the Planned Parenthood clinic’s license to provide abortions “unless doctors consent to inappropriate interrogation, bordering on harassment.”

But health department officials clarified that Planned Parenthood pursued legal action while refusing to comply with DHSS health regulations. Not only had DHSS informed Planned Parenthood several times of health violations at its St. Louis abortion clinic, but Planned Parenthood also repeatedly chose not to amend these ongoing concerns, DHSS said in a May 29 statement.

Violations also included five botched abortion procedures. One woman underwent three different procedures in order to successfully abort her baby, Planned Parenthood’s incoming chief medical officer Dr. Colleen McNicholas said in June, according to The Kansas City Star. McNicholas was the attending physician during almost all of these cases, and she noted that these were five out of the 2,500 abortions performed at the clinic in 2018.

Assistant Attorney General John Sauer also explained incidents at the hearing on Oct. 28 that raised cause for alarm. A woman in one case suffered heavy bleeding when doctors did not identify a condition that made her more at risk than normal patients, The Associated Press reported. In another case, a woman had to return to the clinic for a second abortion because the abortion doctor did not realize the patient was pregnant with twins, he said. 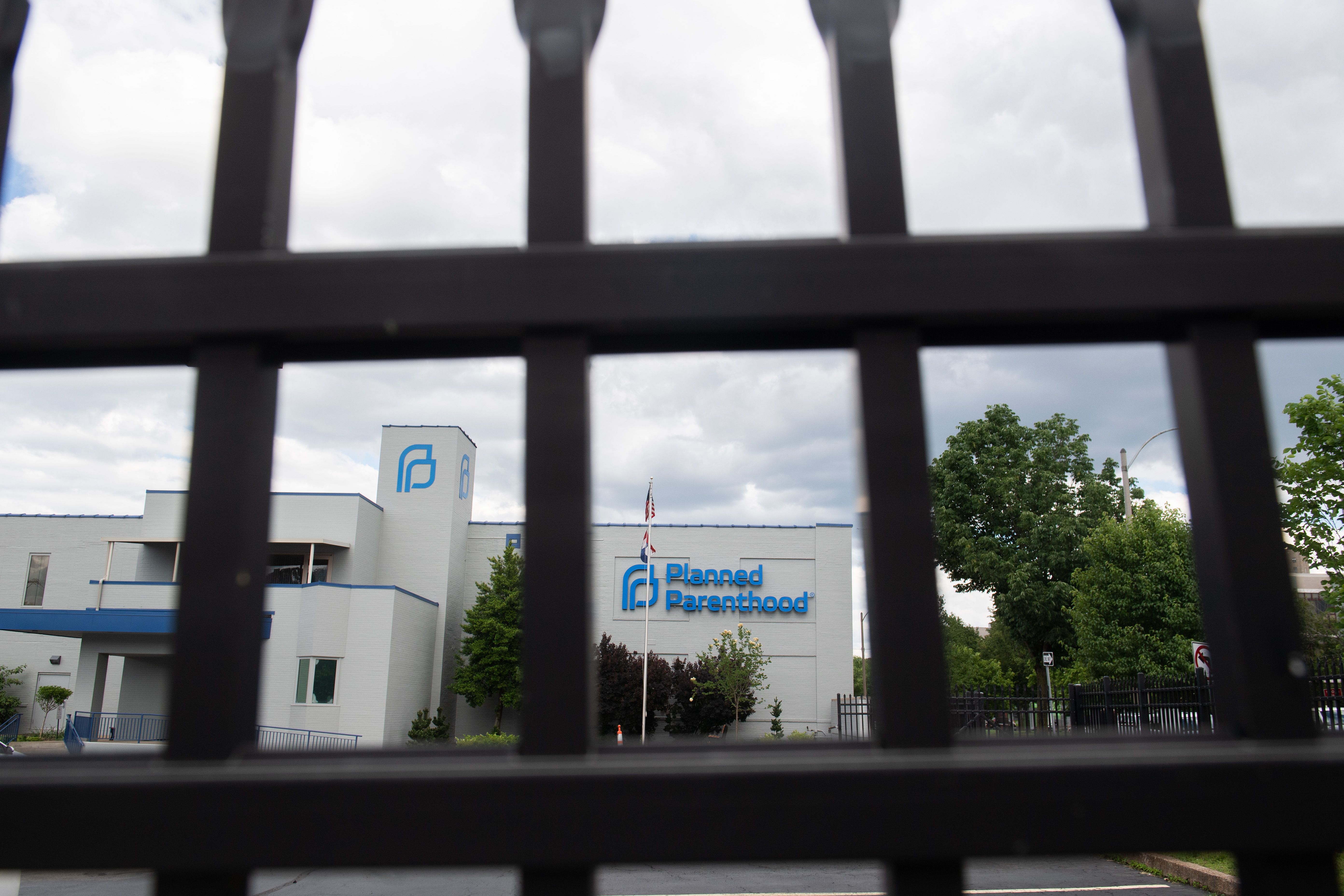 The outside of the Planned Parenthood Reproductive Health Services Center is seen through a gate in St. Louis, Missouri, May 30, 2019, the last location in the state performing abortions. (SAUL LOEB/AFP via Getty Images)

“The unprecedented refusal by Planned Parenthood to fully cooperate as they have in the past heightens our regulators’ concerns about what their investigation has revealed to date,” Director of DHSS Dr. Randall Williams said in a statement. (RELATED: Planned Parenthood Announces Secret Mega Facility In Illinois)

Planned Parenthood filed a lawsuit in May after the Missouri DHSS refused to renew the clinic’s license.

Media outlets, including CNN, TIME and The Kansas City Star, reported following Williams’ court testimony on Oct. 29 that he tracked the menstrual cycles of Planned Parenthood patients in a spreadsheet. None of these publications responded to requests for comment from the Daily Caller News Foundation.

MSNBC’s Rachel Maddow spoke out against Williams as well, saying that Williams personally tracked the periods of Planned Parenthood patients. She did not respond to a request for comment from the DCNF.

“They want to use state regulations, under the direction of the state health director, to regulate the last clinic in the state in such a way that it loses its license and is forced to close,” Maddow said on Oct. 31. “That’s how they’re trying to eliminate access to abortion for women in Missouri. And that’s what these hearings have been about all week. And in the course of these hearings, the state health director confirmed that, yeah, he actually has been tracking women’s menstrual periods on a spreadsheet.”

But this coverage was inaccurate, false and “irresponsible,” according to a DHSS statement DHSS official Lisa Cruz provided to the DCNF.

Abortion doctors from the clinic were not submitting all the complication reports legally required for failed surgical abortions, the statement said.

DHSS regulators investigated information on clients Planned Parenthood provided and narrowed the information to track failed abortions at the Missouri abortion clinic in question, according to the statement, but this was done “without a directive from Dr. Randall Williams” though media reported otherwise.

Regulators shared the case with Williams after identifying failed abortions through this process, according to the statement. The first time Williams saw the spreadsheet was at his deposition on Oct. 17, the statement said.

But the information gathered regarding Planned Parenthood patients was actually vital to “ensuring that facilities are safe for patients,” the statement said.

Missouri law mandates that doctors who perform abortions are legally required to submit a report that includes the date of a patient’s last menstruation and this information is reviewed when a patient’s health is being examined, DHSS spokeswoman Lisa Cox confirmed to the DCNF.

“Necessarily, DHSS retains this documentation,” the statement said, adding that the law mandates these reports must be reviewed when complications for abortion procedures arise in order to make sure that “laws and health care standards are being met.”

“In this case, Planned Parenthood was not compliant with the complication report requirement for failed abortions,” the statement said. “Regulators realized this, and as a result they used the tools they had to protect the health of those who seek abortions at Planned Parenthood.”

The Charlotte Lozier Institute’s David Prentice pointed out to the DCNF that several media outlets, including TIME, inaccurately reported that DHSS and Williams were “tracking menstrual periods” when DHSS was actually tracking information necessary to the woman’s health.

“They were not ‘tracking menstrual periods’ (saying so seems to be poor reporting) but checking legally required ‘induced termination of pregnancy’ forms, same vital records data as used by [the Centers for Disease Control and Prevention] and Guttmacher, which includes date of patient’s last menstrual period, which is standard method by OB’s to estimate age of fetus (gestational age, also called LMP as in since Last Menstrual Period),” Prentice said, adding that this data does not include personal ID.

“Part of the routine care of any pregnant woman and her unborn child is to record her reported first day of her last menstrual period,” Dr. Christina Francis, chair of the Board of the American Association of Pro-Life OB-GYNs, told the DCNF. “This is one method of dating a pregnancy, along with ultrasound and physical exam.”

Francis noted that the date of a woman’s last period is a “crucial piece of information when a woman is seeking an abortion, as methods used may differ significantly depending on how many weeks pregnant she is.”

“It is also significant because the risk of complications of abortion procedures (both medical and surgical) increases with increasing gestational age and could potentially change how a physician would evaluate for and treat post-abortive complications,” Francis added.

Media coverage of Williams and the period spreadsheet may stem more from a desire to protect Planned Parenthood than anything else, founder and President of Live Action Lila Rose told the DCNF.

“Planned Parenthood and their cronies in the legacy media will do anything to distract from the issue at hand: Planned Parenthood’s ruthless pursuit of profits has repeatedly put vulnerable women in harm’s way and sometimes grave danger,” Rose said.

“Safety and legal violations as well as failed abortions — which can be life-threatening — are all the evidence the Commission needs to shut down this deadly abortion business,” Rose told the DCNF. “Missouri women and children will be far better off without Planned Parenthood in their backyard.”

“The people in our country are deeply uncomfortable with the fact that people who are in a position of power can abuse that power by misusing the data for a political agenda,” Lee-Gilmore said. “How is the government going to use my information to wage a political war?”

Planned Parenthood did not respond to multiple requests for comment from the DCNF.