It hasn’t always been controversial for the President of the United States to invite a sports team to the White House, but under President Donald Trump, entire teams of athletes have taken it as an opportunity to publicly criticize the president.

HOUSTON, TEXAS – OCTOBER 22: Sean Doolittle #63 of the Washington Nationals celebrates after closing out the teams 5-4 win over the Houston Astros in Game One of the 2019 World Series at Minute Maid Park on October 22, 2019 in Houston, Texas. (Photo by Mike Ehrmann/Getty Images)

President Donald Trump invited the Washington Nationals to the White House after the team’s 2019 World Series victory. Most accepted, but Doolittle declined, releasing a statement saying his conscience prevented him from attending due to Trump’s “divisive” policies. (RELATED: How The Media Treated Athletes Who Skipped Obama’s White House Visits)

“There’s a lot of things, policies that I disagree with, but at the end of the day, it has more to do with the divisive rhetoric and the enabling of conspiracy theories and widening the divide in this country,” he told the Washington Post.

Doolittle and his wife, who was raised by a lesbian couple, have long been activists for the LGBT community.

The rest of the Nationals team attended the event, however, with catcher Kurt Suzuki wearing a MAGA hat and first baseman Ryan Zimmerman thanking the president and presenting him with a custom made Trump jersey.

COLUMBUS, OH – SEPTEMBER 15: Megan Rapinoe #15 of the U.S. Women’s National Team kneels during the playing of the U.S. National Anthem before a match against Thailand on September 15, 2016 at MAPFRE Stadium in Columbus, Ohio. (Photo by Jamie Sabau/Getty Images)

President Donald Trump rescinded his invitation to the U.S. Women’s National Team after several players, including the team’s captain Megan Rapinoe, said they would “absolutely not” attend.

“I’m not going to the fucking White House,” Rapinoe told Eight by Eight.

Rapinoe made politics central to her appearance at the Women’s World Cup, and refused to stand for or sing the national anthem with her teammates at the beginning of each game. (RELATED: Megan Rapinoe Named FIFA Women’s World Cup Player Of The Year)

In regards to the “President’s” tweet today, I know women who you cannot control or grope anger you, but I stand by @mPinoe & will sit this one out as well. I don’t support this administration nor their fight against LGBTQ+ citizens, immigrants & our most vulnerable.

The Houston Astros won their first-ever World Series in 2017, but two of their biggest stars declined to attend the team’s White House visit over Trump’s handling of Hurricane Maria in Puerto Rico. Correa and Beltran are both Puerto Rican and were critical of the president as the hurricane struck.

The rest of the team attended the event, however.

“This is a tradition and an honor. For many people, this might be their only time to ever be invited to the White House,” Astros executive Reid Ryan told the Houston Chronicle at the time. “And as the representatives of baseball and the World Series champs, when the White House calls and invites you to come up, it’s something that as an organization we felt both a responsibility and an obligation to be part of.”

Trump called off his invitation to the Eagles after the vast majority of the team vowed not to attend following their 2017 Superbowl win. Torrey Smith, Chris Long, and Malcolm Jenkins led the team’s protest.

Jenkins was among the most vocal national anthem protesters throughout the 2017 season, having helped found the Players’ Coalition (PC). The PC held months-long negotiations with the NFL before the end of the season, eventually convincing the league to pledge $89 million in donations to black American and social justice causes.

Had Trump not rescinded the invite, just three players would’ve been expected to attend.

Both Steph Curry and Kevin Durant promised to decline any White House invitation after becoming NBA champions in 2017. The prospect of the team attending without some of its star players led Trump to rescind the invite.

Going to the White House is considered a great honor for a championship team.Stephen Curry is hesitating,therefore invitation is withdrawn!

“My stance is the same as it was, and even kind of cemented even further about how things in our country are going, especially with [Trump] representing us in a very damaging way.” Curry said at the time. “I don’t know why he feels the need to target certain individuals rather than others. I have an idea of why, but it’s kind of beneath a leader of a country to go that route. That’s not what leaders do.”

The Warriors made the same decision after winning again in the 2018 NBA finals, where both Curry and LeBron James of the Cleveland Cavaliers vowed not to attend if their teams won.

Braden Holtby #70 of the Washington Capitals waits for play to begin during the second period against the Philadelphia Flyers at the Wells Fargo Center on March 06, 2019 in Philadelphia, Pennsylvania. (Photo by Bruce Bennett/Getty Images)

Holtby was the only member of the Washington Capitals to skip their visit to the White House after winning the Stanley Cup in 2018.

“I’ve got to stay true to my values, and I’m going to respectfully decline the offer,” Holtby said at the time. “For me, it’s just a personal thing. I believe in what I believe in, and in order to stick to those values, I think I have to do what I feel is right, but that doesn’t make a difference on everyone else’s decision.”

Holtby is extremely active in the LGBT community, leading the team’s Pride Parade in 2016 and serving as a You Can Play ambassador to the league, a role which calls on him to be “a leader in the locker room and in the community on diversity, equality, and inclusion,” according to The Washington Post. 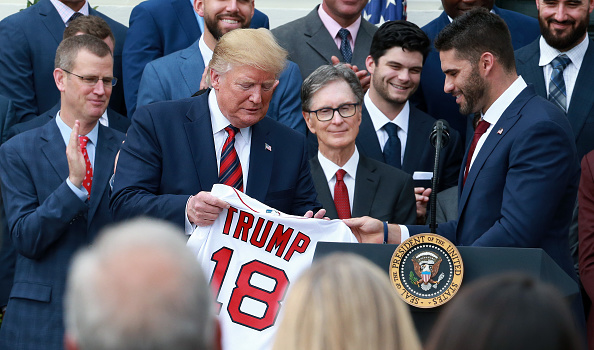 “Unfortunately, we are still struggling, still fighting. Some people still lack basic necessities, others remain without electricity and many homes and schools are in pretty bad shape almost a year and a half after Hurricane Maria struck,” Cora said at the time. “I’ve used my voice on many occasions so that Puerto Ricans are not forgotten, and my absence is no different. As such, at this moment, I don’t feel comfortable celebrating in the White House.”