In Belgium and Germany, workers who make around $40,000 in income pay average tax rates of 50.6% and 50.2%, respectively, meaning they return more than half of every dollar earned to the government, the study notes.

If the U.S. implemented European-style entitlement programs like Medicare for All, free college, guaranteed jobs and paid family and medical leave, it would also have to increase its tax rates — and not only for the rich, despite 2020 Democratic presidential candidate and Massachusetts Sen. Elizabeth Warren’s promises, Heritage Foundation senior policy analyst Adam Michel, author of the report, noted in the study.

Entitlement programs “do require higher taxes, but they don’t give us ‘better’ anything. Instead, you get a larger, more intrusive government that often doesn’t meet the needs of the typical American. The more we centralize things in Washington, the less those services are able to be tailored to what any individual or community needs,” Michel told the Daily Caller News Foundation.

Michel added that not only would the programs Democrats are promising “require dramatic tax increases,” they would be nowhere near as “perfect and well-designed” as Democrats lead voters to believe they would be.

William Gale, a senior fellow of economic policy at the Brookings Institution — a liberal, D.C.-based think tank — offered a counter perspective on government safety-net programs, telling the DCNF that there is “plenty of room for government to boost what it’s spending on health and education and the safety net, generally, especially early education.”

Gale also said Michel’s claim that the government would become more intrusive could “just as easily” mean the government would provide “more social services, provides a stronger safety net, takes better care of its children and low-income families better than we do in this country,” and that’s what Europeans pay for.

“If you look at the broad difference between the U.S. and Europe, they provide everyone with health care, they have health care allowances, they have child allowances, much more progressive childcare policies than we do — and that stuff costs money. But they essentially use the money, some of which is raised from the middle class, to cover those costs,” Gale continued.

Brian Riedl, senior fellow at the Manhattan Institute — a free-market think tank — however, argued that the U.S. single-payer health care system “is substantially more generous than anything Europe or Canada does. … American plans assume no copays, no family premiums and no out-of pocket expenses. Most single-payer plans require copayments and out-of-pocket expenses. American plans require none.”

“American plans require no rationing and universal coverage for the top technology and the biggest hospitals for any procedure that people want. By contrast, Europe and Canada have a limited infrastructure, much less technology and government rationing,” he continued. 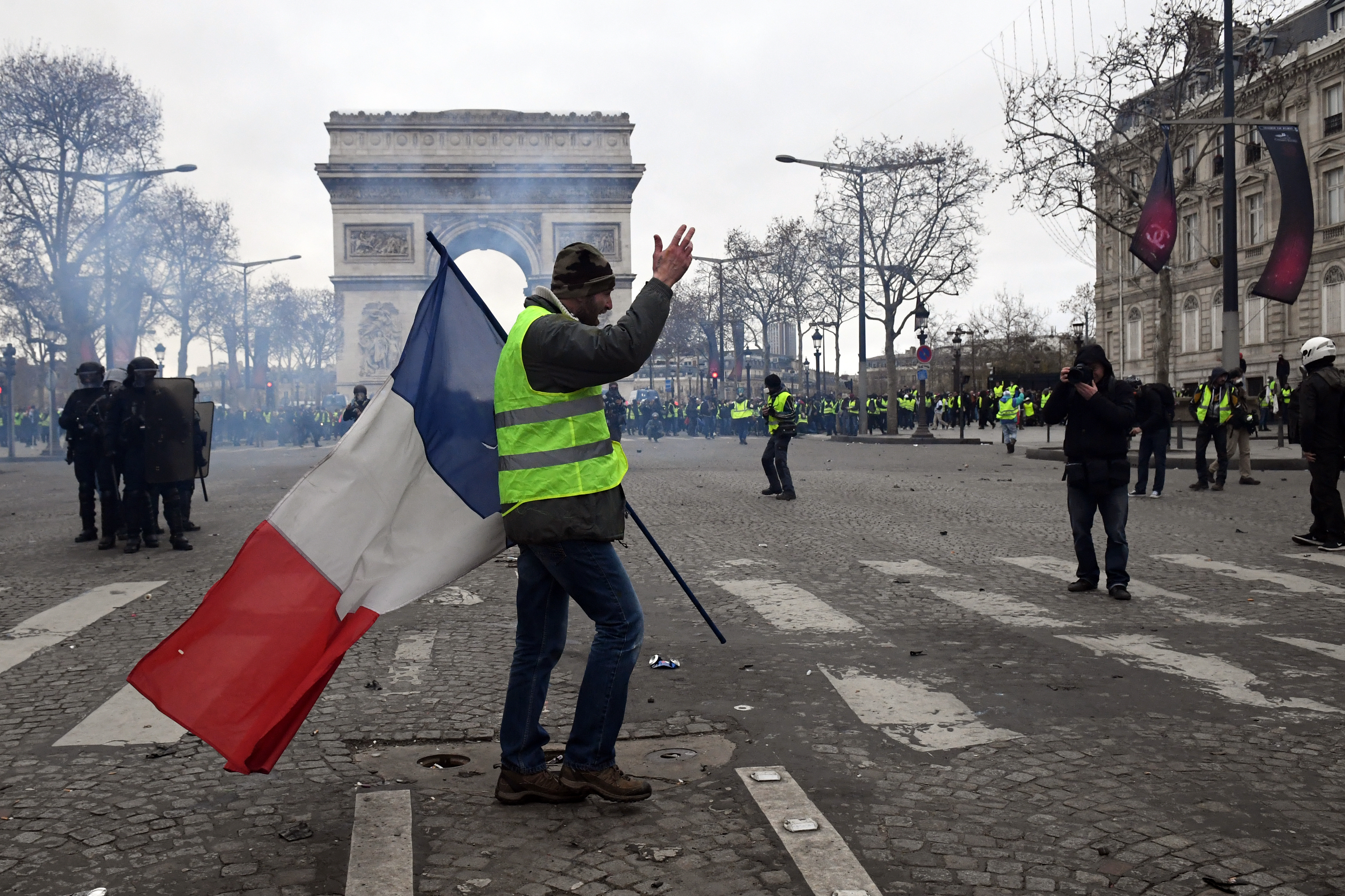 A protester walks with the french flag during the ‘yellow vests’ demonstration near the Arc de Triomphe on Dec. 8, 2018 in Paris France. (Photo by Jeff J Mitchell/Getty Images)

Riedl added that “it is mathematically impossible to pay for Democratic socialism without taxing the middle class.” (RELATED: Here’s How a Proposed Climate Tax Led to France’s Biggest Riots In Years)

Republicans argue that promises like Medicare for All and free college look like “free lunches” but ultimately take more money out of everyone’s pockets, and it’s the packaging of these entitlement programs that is so appealing to most Americans.

“Medicare for All is popular to those who assume it will cost them nothing,” Riedl explained. “Once Medicare for All moves from an aspiration to actual legislation, the costs will become evident, and support will collapse. Medicare is sold as a ‘free lunch.’ But that will collapse once [Democrats] get down a legislative path and reveal that the numbers don’t add up. It’s a vague aspiration.”

Democrats make a similar but opposing argument that tax cuts look like “free lunches” but ultimately only benefit the top 1% and increased taxes in return for government benefits could ultimately help the middle class save money.

“Tax cuts often look like ‘free lunches’ for taxpayers, but they eventually have to be paid for with other tax increases or spending cuts. … Government spending under current policy will significantly exceed government revenue even if taxes are maintained at current levels,” Gale wrote in a 2017 Tax Policy Center report.

A Committee for a Responsible Federal Budget study released on Oct. 28 found that even if taxes on the middle class increased significantly to fund Medicare for All and economic growth slowed as a result, the middle class could still save more money on health care costs than they would pay in taxes, NBC News reported.

Gale said Warren’s and Sanders’ proposals like Medicare for All and free college would “certainly” help middle-class families save money, even if they were paying more in taxes. 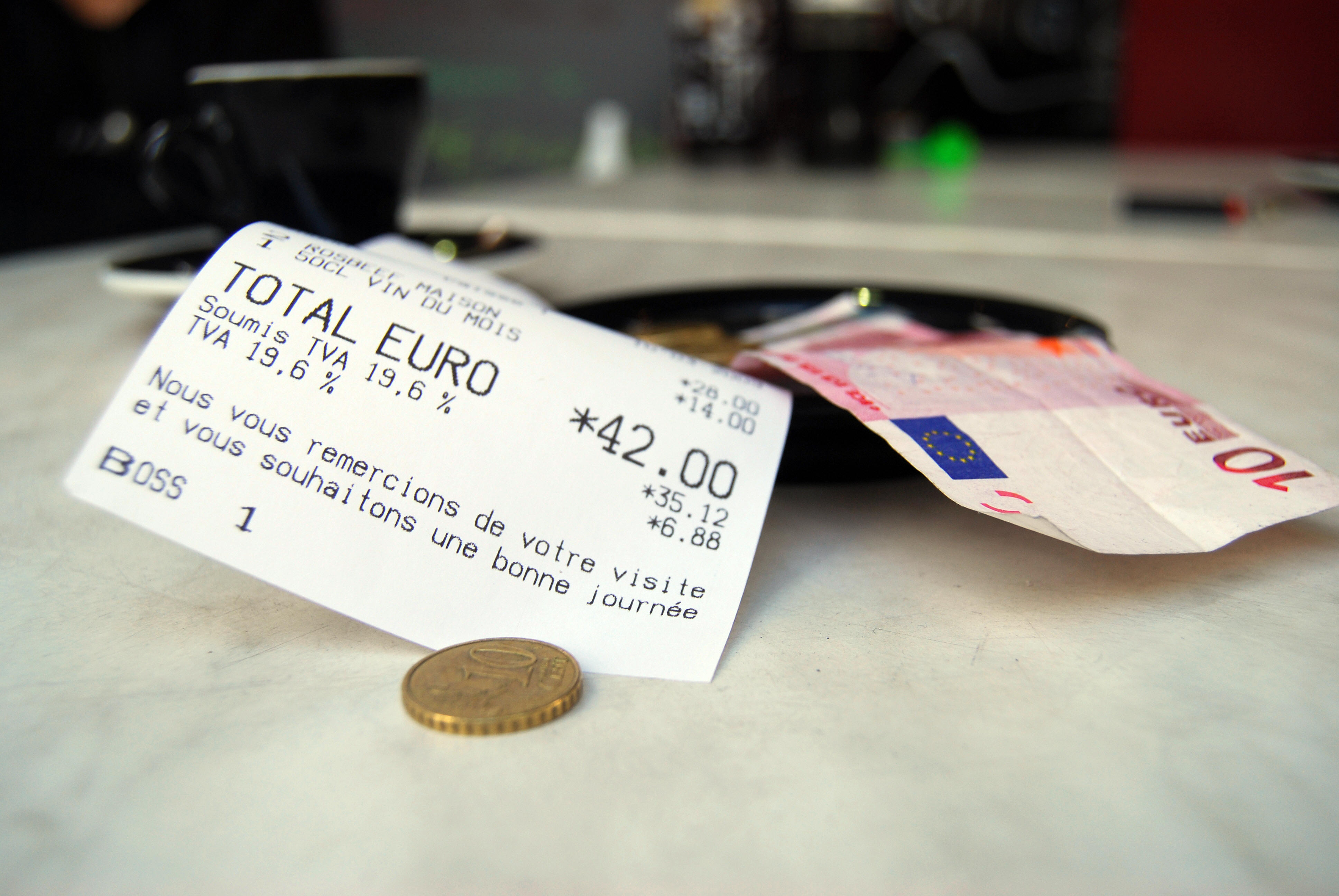 An invoice shows the 19.6 percent tax on a beverage at a restaurant in Paris on March 10, 2009. (Caroline VENTEZOU/AFP via Getty Images)

Warren, Vermont Sen. Bernie Sanders and other 2020 Democratic presidential candidates have argued that a tax on America’s wealthiest people would significantly help the U.S. pay for their progressive yet expensive policy proposals such as Medicare for All, free college and the Green New Deal, an open immigration system and more.

A tax on only billionaires, however, would not be nearly enough money to implement all the policy proposals candidates like Warren and Sanders have introduced without touching middle class taxes, Michel and Riedl explained to the DCNF. The U.S. middle-class workers would shell out even more taxes than the average European middle-class worker pays, they said.

“The progressive left’s narrative right now is that we can do all of these things with just tax increases on the wealthy is incredibly disingenuous,” Michel told the DCNF.

Riedl similarly told the DCNF that the “mathematical reality” is: “There is no way to finance Medicare for All and the Democratic wish-list without exorbitant taxes on the middle class.”

Warren recently faced scrutiny fire for her Nov. 1 outline of a Medicare for All plan that would cost the U.S. $52 trillion over 10 years, including $20 trillion in new spending, in which she claims the funding would come mostly from taxing billionaires, though experts agree that would not be possible, Fox News reported.

“What’s remarkable to me is that Warren is actually proposing ways to pay for this, and that’s to be applauded. She’s not saying this will magically finance itself. She’s saying she’ll pay for it,” Gale told the DCNF.

“I’m not going to defend every dollar or number in there, but all the absolutes in this discussion are problematic. Will she raise exactly the amount of money she said? Who knows? Will there be literally no tax increase on the middle class? Maybe not … but the whole idea is that some tax increase versus no tax increase is the wrong way to frame it,” he continued.

Michel disagreed, saying the outline is not realistic in terms of how to fund Medicare for All without raising taxes on the middle class.

“Warren goes part of the way there with her recent proposal, but doesn’t propose enough taxes or spending reduction to pay for her plan,” Michel explained. “She’s trying really, really hard to say she’s just going to raise taxes on wealth people, but her proposal doesn’t meet that threshold and still doesn’t finance what she’s proposing.” 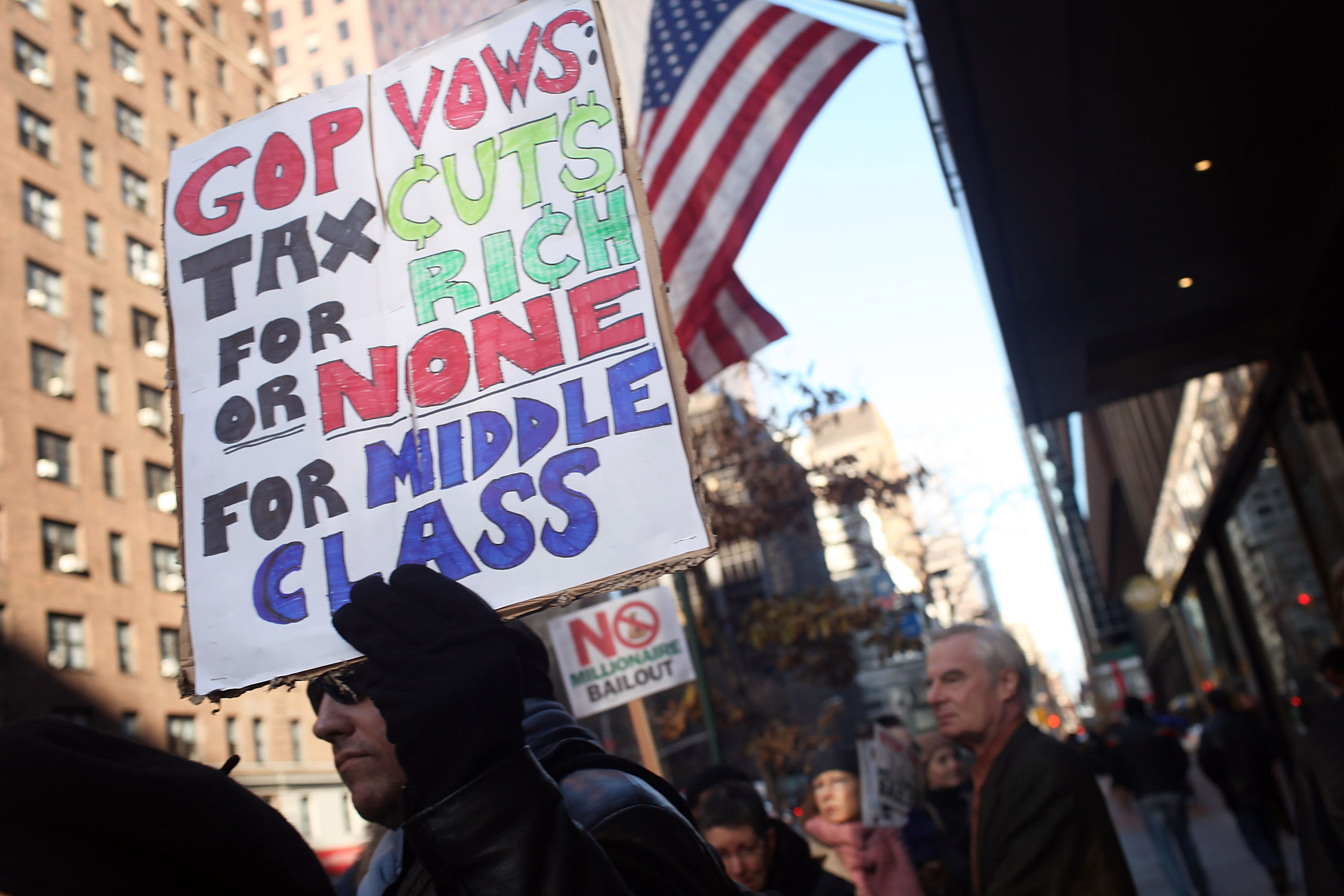 People attend a rally outside of the office of Sen. Charles Schumer to protest an extension of tax breaks for the wealthiest two percent of Americans on Dec. 2, 2010 in New York City. (Photo by Spencer Platt/Getty Images)

Even fellow candidate Joe Biden’s campaign said the idea is not plausible.

“Her plan would create a new tax on employers of almost $9 trillion that would come out of workers’ pockets, a new financial transaction tax that would impact investments held by middle class Americans, and a new capital gains tax that would affect far more people than she stated tonight,” the former vice president’s deputy campaign manager, Kate Bedingfield, said in a statement, according to Fox.

Sanders’s various spending proposals, if they were all implemented, would amount to a total of $97.5 trillion over 10 years, according to an Oct. 15 op-ed by Riedl published in the Manhattan-based news outlet City Journal in which he breaks down the numbers.

“The Democrat plans right now would bring the federal budget from $45 trillion to Bernie Sanders’ $97.5 trillion over 10 years. Yet even if you took every penny earned by millionaires, it would raise only $9 trillion,” Riedl explained to the DCNF.

“Let’s say Warren had to raise $30 trillion for her agenda from the middle class. … That would require either a 33% payroll tax or a 78% national sales tax, and that’s how Europe funds their socialism. Europe funds their socialism from payroll taxes and value-added taxes. Europe doesn’t do it by taxing the rich. Europe taxes the middle class heavily, and the U.S. would have to, as well,” Riedl continued.

Even if Warren was not trying to fund her whole agenda but rather just Medicare for All, if the U.S. were to tax just millionaires at 100% tax rates, the country would only raise about $9 trillion over a decade, Riedl said, adding that Medicare for All requires at least $30 trillion.

Under a Sanders presidency, total government spending could jump to as much as 70% of gross domestic product, and 50% of the U.S. workforce would work for the government, Riedl’s op-ed said. 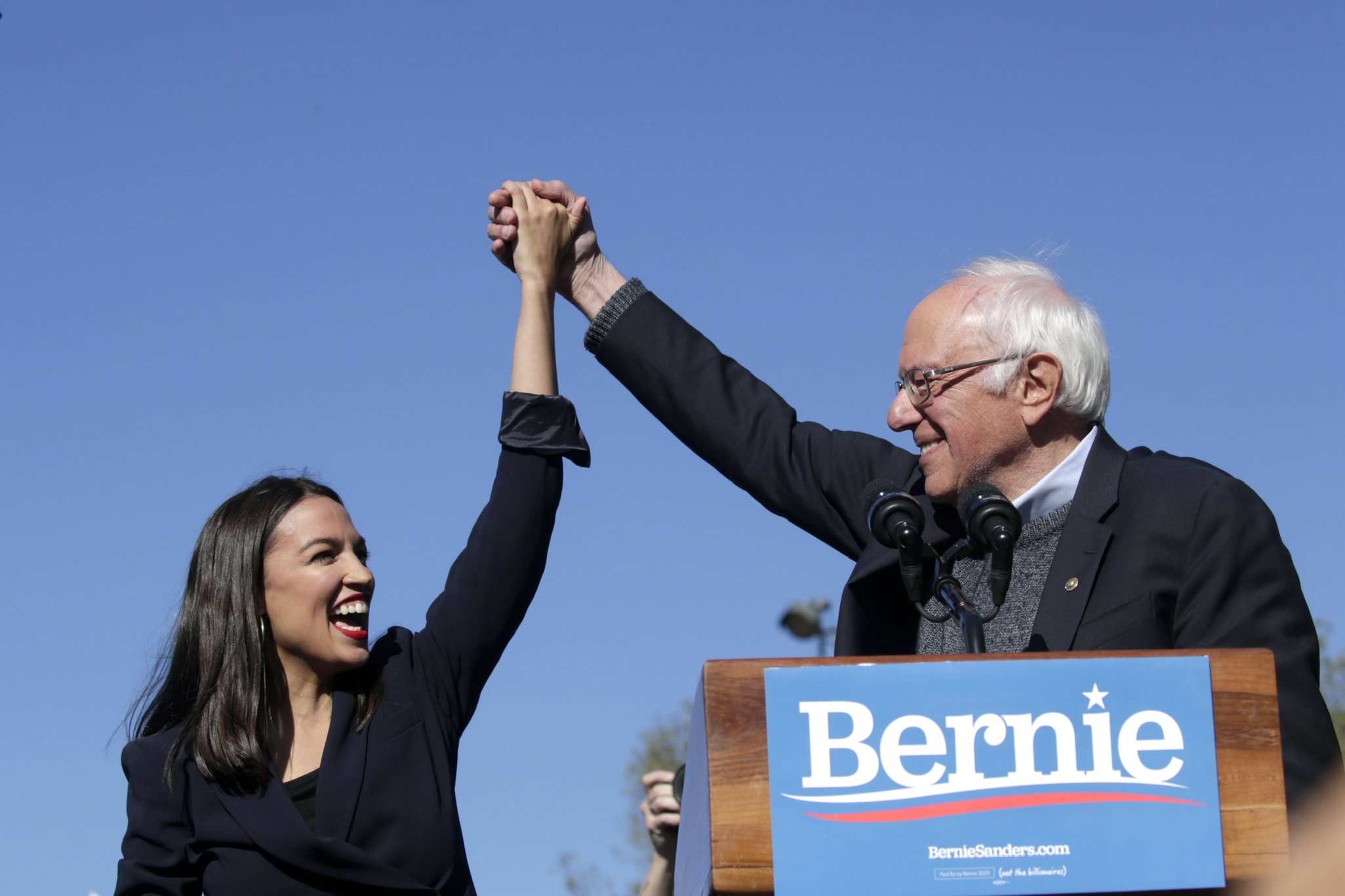 “A wealth tax on even the 1% is much more than the normal American realizes,” Michel told the DCNF.

“This isn’t just taxing their annual income. This is taxing all of the assets they own, which is many different medium-sized businesses all across America, and ultimately, they would have to sell pieces of those businesses in order to pay Washington. That’s just one channel through which a wealth tax means jobs go away and wages can’t be raised for families all across America,” he continued.

If Warren and Sanders were to fund their programs the way the European Union’s finances its federal health care and “social safety net,” they have to do it through significantly higher payroll taxes and a value-added tax, and not just for the wealthy but for everyone, Michel explained.

Sanders has conceded that his socialist programs would increase taxes on the middle class, but said he suspects “a lot of people in this country would be delighted to pay more in taxes if they had comprehensive health care as a human right” in a June 13 CNN interview with Anderson Cooper.

Michel said this kind of ideology will make immigrants think twice about looking for an opportunity to bring their ideas and innovations to America in exchange for success.

“It telegraphs a different ethos about America than we have had historically. America is a place where entrepreneurs and innovators come to … create tremendous new products and make all Americans’ lives better. A wealth tax says to those people who are seeking opportunities, ‘Don’t come here. We don’t want success. We pride everyone being equal over everyone being better off,'” Michel said.

This article has been updated to include comments from William Gale.