Transcripts released Wednesday revealed the Al Pacino movie-like clash, during which Roy declared the entire proceeding “out of order” after being frustrating by Schiff’s refusal to address his concerns.

Towards the beginning of Taylor’s testimony, Roy had asked about about getting transcripts since he was going to be on a subcommittee and “unable to participate.” 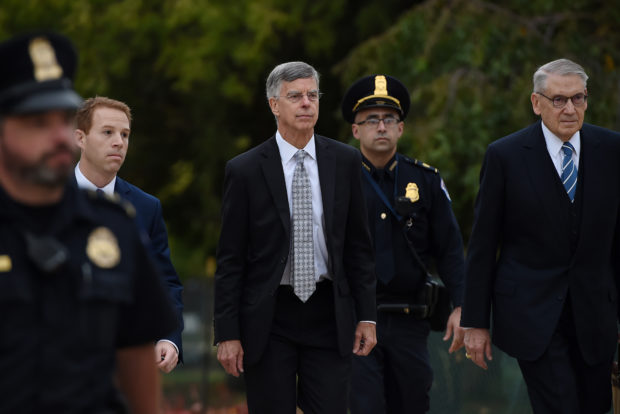 Former US Ambassador to Ukraine Bill Taylor (C) arrives at the US Capitol to testify before the House Intelligence, Foreign Affairs and Oversight committees as part of the ongoing impeachment investigation of US President Donald Trump on October 22, 2019 in Washington, DC. (Photo by Olivier Douliery / AFP) (Photo by OLIVIER DOULIERY/AFP via Getty Images)

But Schiff shut him down with an order to “suspend.”

“The gentleman is not recognized,” said Schiff. “You can take your comments outside, sir.”

“Take them outside to whom?” Roy asked. “You’re the judge and jury sitting in here deciding who can see this clown show. When can we actually when can my colleagues who aren’t on this committee see the materials in question?”

Schiff responded with another request to suspend, noting that Taylor had traveled “all the way from Ukraine.”

To which Roy responded: “This whole hearing is out of order.”