The Trump campaign has hosted several contests that promise supporters a chance to meet the president in exchange for a small donation to his re-election campaign, but does anyone ever win?

According to former ThinkProgress editor-in-chief Judd Legum, there is no evidence that anyone has actually won one of the contests, which are advertised across social media and offer either a breakfast, dinner, or meet and greet with President Donald Trump.

“An investigation by Popular Information, however, did not uncover evidence that anyone has ever actually won,” Legum claimed. “Are these contests, which promise a meal with Trump, a scam? Is the Trump campaign swindling its own supporters? We don’t know.”

Other media outlets ran with the conspiracy theory that the campaign was operating a scam to entice supporters to donate, including Vanity Fair and Newsweek. (RELATED: Trump Re-Election Effort Raises A Record $125 Million In Third Quarter)

“In nearly two years of these promotions, there’s yet to be evidence that any of these promised meals actually happened,” Kenzie Bryant wrote for Vanity Fair, while a former White House lawyer told Newsweek that campaign officials could be prosecuted for fraud if no one was actually winning the contests.

Trump campaign spokesman Tim Murtaugh tweeted earlier this week that Vanity Fair never reached out to the campaign to inquire about contest winners.

“People win the contests all the time,” Murtaugh wrote. “But asking would’ve gotten in the way of a clickbait headline, huh? And no we didn’t respond to Judd Legum, ThinkProgress& Hillary alum, for obvious reasons.”

Though you never asked us @kenzbry here’s an answer anyway. People win the contests each time.

But asking would’ve gotten in the way of a clickbait headline, huh?

And no we didn’t respond to Judd Legum, ThinkProgress & Hillary alum, for obvious reasons.https://t.co/GaNqgnH0ju

The Daily Caller spoke to two Trump supporters who did win the contests. One of the winners described the experience as “life-changing,” while the other described it as “awe-inspiring.” The Trump campaign confirmed that both individuals are contest winners.

Joanna Kamis, a 49-year-old farmer from Connecticut, said she donates to the Trump campaign in amounts ranging from $50-100 a couple of times each month. A short time after one of her September 2019 donations, she was informed over the phone that she had won a contest to have breakfast with Trump.

“I had never won anything in my life, so this was a big deal,” Kamis said, adding that she was initially skeptical that the phone call was real. “I was skeptical of it.”

The campaign paid for Kamis to travel to New York City on Sept. 26, where she attended a VIP breakfast at Cipriani. While the president did not attend the buffet breakfast as the contest details would suggest, Kamis was able to mingle with the likes of Donald Trump Jr., Kimberly Guilfoyle, and Elizabeth Pipko before being ushered into another room to meet the president and have their photo taken together. 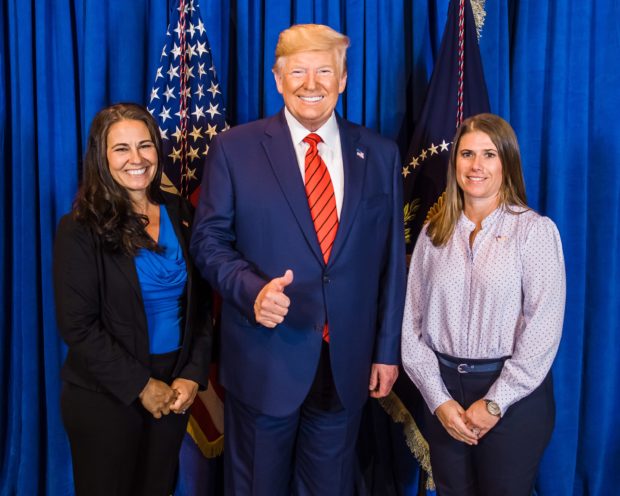 Joanna Kamis (left) and her friend, Kim, take a photo with President Donald Trump at Cipriani in NYC (Photo provided to the Daily Caller by Joanna Kamis)

Kamis described the president as friendly and cordial and said the moment was “overwhelming.” She noted that she initially expected the president to attend the breakfast portion of the event, but conceded that she understands he is “busy” and that the meet and greet took place the same week as the United Nations General Assembly. Kamis was later able to sit in the front row as the president gave a speech to supporters.

“I had never met anyone at this capacity,” Kamis explained. “It was a total thrill and awe-inspiring.”

Chris Chavez, a 23 year old entrepreneur from Arizona, met the president backstage at a rally through a campaign contest in August 2017. He donated just $3 to the campaign and was notified several days later that he had won the contest.

“I never expected to win,” Chavez told the Caller. “I thought it was a joke.”

The campaign paid for Chavez and his father to stay in a hotel across the street from the convention center in Phoenix where Trump was holding a rally, and then invited the pair backstage before the rally started. Chavez said he was able to meet former Arizona governor Jan Brewer and former Republican congressman JD Hayworth while they were waiting for the president to arrive.

“We waited about 10-20 minutes and then we heard ‘The Beast’ roll up,” he said, referring to the president’s vehicle in the motorcade.

The president made his way through a crowd of VIPS for about ten minutes before he came up to Chavez and his father.

“Finally when it was my turn, I walked up, I shook his hand,” Chavez recalled. “He was very down to earth, very nice guy. Not what you see on TV at all.”

“He wanted to know about me — who I was, what I did, where I was from — he wanted know about my dad, about my family,” he continued. “He really took time to get to know me … He was almost like a long lost family member. Like a grandpa or an uncle I had never met.” 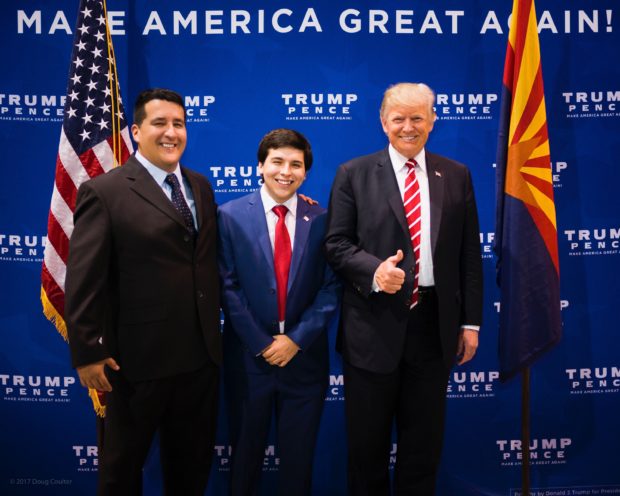 At one point during the approximately ten minute conversation, Chavez said that Trump turned to his father and said, “You know, you’ve raised a really fine young man here. I’m really proud of you.”

Chavez said the experience of being backstage with the president and meeting the other VIPs convinced him to get more involved in politics.

“This has just launched me into so much that I never thought was possible,” he asserted, noting that he went on to run for local office in Scottsdale, Arizona, and began attending other political events and volunteering with the Republican Party. “It’s really been a huge step for me.”

When asked about the media reports that no one ever wins the Trump campaign contests, both winners declared that they are “fake news.”

“If I had to tell the fake news anything, I’d have to tell them that people do win these things and that they’re life-changing events,” Chavez said. “A three dollar donation here or there, ten dollars here or there — I’m more than willing to donate something like that for the chance at meeting the president.”

“It is definitely not a scam,” Kamis concurred.