The #MeToo movement has sent powerful figures packing in virtually every major industry in America, from Hollywood to the news media, and when it came to Congress, the carnage was bipartisan.

Here are some of the most notorious sex scandals to force members of Congress to resign since 2016. There are more than a few.

Her other relationship was with a female campaign staffer, with whom she maintained a “throuple” relationship with her husband. She and her husband are in the process of divorcing. (RELATED: The Four Congressman Remaining In Congress Despite Sexual Misconduct Allegations)

Rep. Katie Hill in her final floor speech: “I am leaving now because of a double standard … I’m leaving because of a misogynistic culture that gleefully consumed my naked pictures, capitalized on my sexuality and enabled my abusive ex to continue that abuse.” pic.twitter.com/SgVIcX990G

Al Franken resigned in 2018 after a picture emerged of him pretending to grab the breasts of an unconscious female comedian, Leeann Tweeden, while they were touring the Middle East entertaining American troops. The incident lead several other women to come forward and accuse him of wrongdoing.

Franken repeatedly dragged out his resignation, eventually resigning weeks after he announced his intention to do so. (RELATED: Dems See No Comparison From Congressional Sexual Harassment Settlements To Trump’s Payoffs Of Women)

“When I leave the Senate in a few weeks, I will continue trying to be an educated citizen and an advocate and an activist, but over the last eight and a half years, as I have had the privilege of serving the people of Minnesota, I have also gained a new perspective on the issues we face and the way we here in Washington make decision,” he said on the Senate floor. 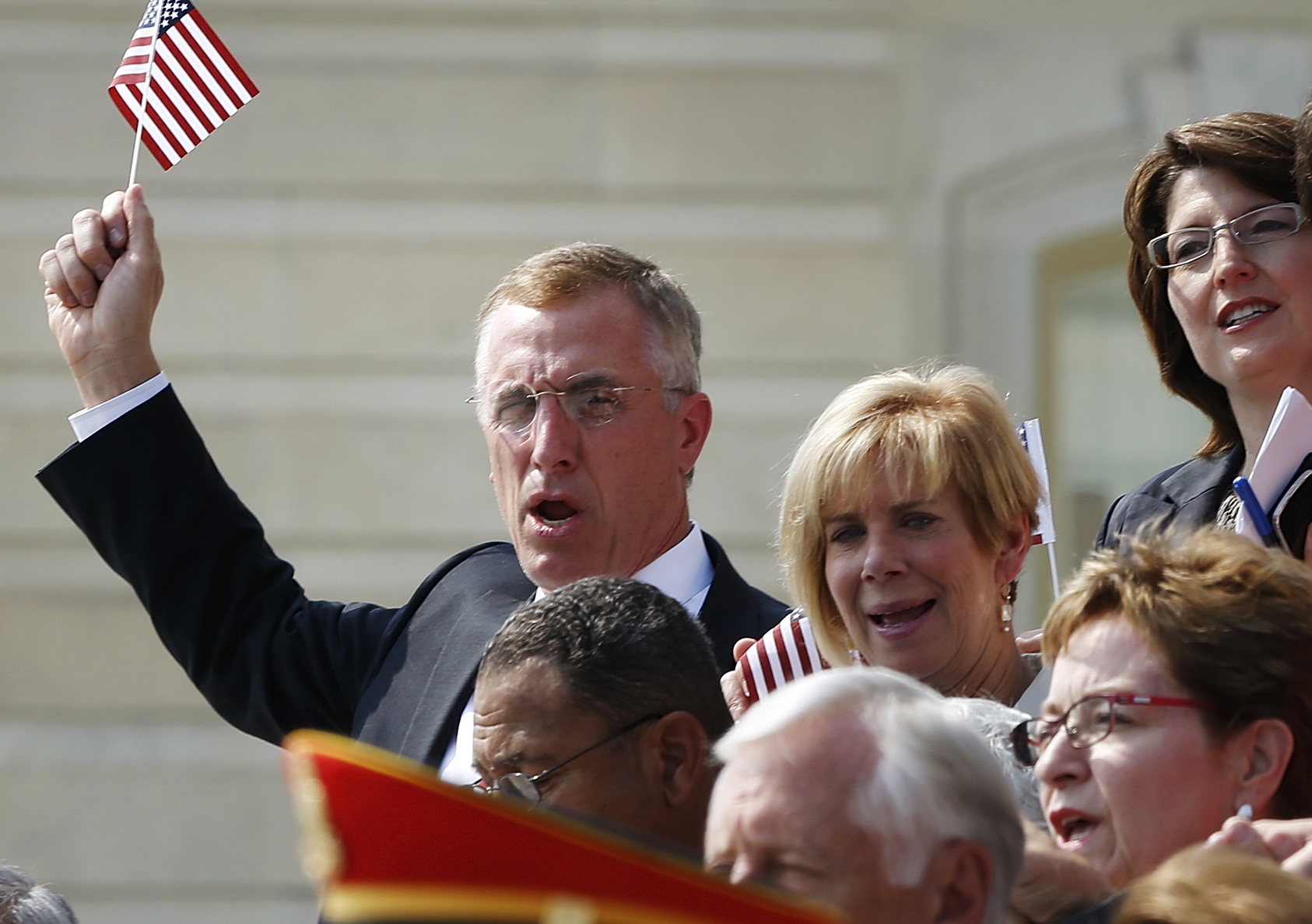 U.S. Representative Tim Murphy (R-PA) holds up a U.S. flag as he and other members of the U.S. Congress sing “God Bless America” in remembrance of lives lost in the 9/11 attacks, on the steps of the U.S. Capitol in Washington, September 11, 2013. (REUTERS/Jonathan Ernst)

Murphy resigned in October 2017 amid one of the largest sex scandals in decades. Despite his public face as a staunch pro-life, pro-family Republican, Murphy was found to have impregnated his mistress before pressuring her to get an abortion.

Text messages with his mistress, psychologist Shannon Edwards, appear to show that his pro-life stance was necessary to win elections, but he didn’t believe it personally.

One text from Edwards reads, “And you have zero issue posting your pro-life stance all over the place when you had no issue asking me to abort our unborn child just last week when we thought that was one of the options.”

“I get what you say about my March for life messages,” he replied. “I’ve never written them. Staff does them. I read them and winced. I told staff don’t write any more. I will.” (RELATED: You Won’t BELIEVE How Many Sexual Predators Congress Tolerates)

Murphy admitted that the texts, affair, and abortion pressure were true, confirming the report from the Pittsburgh Post-Gazette.

“Last year I became involved in an affair with a personal friend,” Murphy said in a statement. “This is nobody’s fault but my own, and I offer no excuses. To the extent that there should be any blame in this matter, it falls solely upon me. I ask the media to respect the privacy of my family. They have done nothing wrong and deserve to be left alone.”

Conyers resigned in December 2017 after at least six female former staffers accused him of sexual harassment and Buzzfeed News uncovered a $27,000 harassment settlement he paid to a former staffer using taxpayer dollars.

“I am retiring today, and I want everyone to know how much I appreciate the support, incredible undiminished support I’ve received,” Conyers said at the time. “My legacy can’t be compromised or diminished in any way by what we are going through now. I want you to know that my legacy will continue through my children.” (RELATED: Congress Unanimously Approves Bill To Curb Sexual Harassment On Capitol Hill)

He maintained that his reputation was untarnished by the accusations, despite Speaker Nancy Pelosi and other prominent Democrats urging him to resign.

As he was resigning, he endorsed his son, John Conyers III, to be his replacement, but Rep. Rashida Tlaib would eventually take the seat.

Farenthold resigned in April 2018 following a report that he’d spent $84,000 in taxpayer dollars to settle a sexual harassment with a former staffer. The report lead to a House Ethics Committee investigation, which ended when he chose to resign.

“While I planned on serving out the remainder of my term in Congress,” Farenthold said at the time. “I know in my heart it’s time for me to move along and look for new ways to serve.”

Farenthold’s accuser claimed the Representative had subjected his staff to a myriad of sexual indignities. 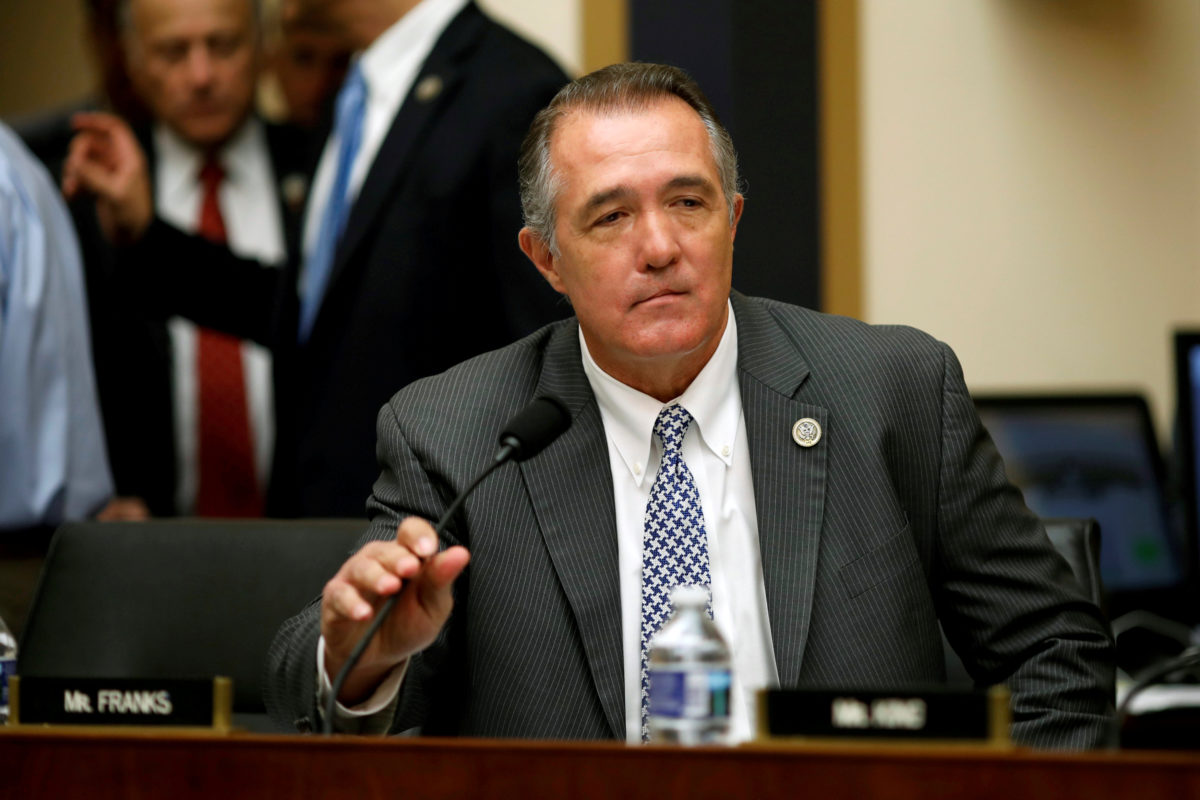 Franks resigned in December 2017 following reports that he’d repeatedly offered a to pay a former staffer $5 million to be the surrogate for his children.

“I have always tried to create a very warm and supportive atmosphere for every last person who has ever worked in my congressional office,” Franks said as he resigned. “It is my deepest conviction that there are many staffers, former and present, who readily volunteer to substantiate this fact.”

Franks claimed that his offers weren’t sexual in nature and only came from the fact that he and his wife had “struggled with infertility” and “experienced miscarriages.”

The House Ethics Committee opened an investigation, but Franks resigned before it could conclude.

“In the midst of this current cultural and media climate, I am deeply convinced I would be unable to complete a fair House Ethics investigation before distorted and sensationalized versions of this story would put me, my family, my staff, and my noble colleagues in the House of Representatives through hyperbolized public excoriation,” Franks said. “Rather than allow a sensationalized trial by media damage those things I love most, this morning I notified House leadership that I will be leaving Congress.”

Remember Wes Goodman? That Ohio GOP State Rep who ran on the platform of “family values” then got exposed having sex with a man in his office while he was married?

He’s back at it

A source just reached out to me and said he was sent this after posting about his shoulder surgery pic.twitter.com/vgTu7dkUuT

Goodman resigned his seat in 2017 after being found to have repeatedly cheated on his wife with other men, despite running on an anti-LGBT, “family values” platform to get elected.

Thirty young men came forward and accused Goodman of sexual misdeeds varying from harassment to assault. Dozens of screenshots show him messaging the young men in sexually suggestive ways, often after offering to serve as their “mentor.”

1
CNN Reporter Accuses Trump Of 'Damage Control' After He Speaks At March For Life
Media
2
EXCLUSIVE: Columbia University Found Him Guilty. But He's Got Voice Recordings, And He's Not Afraid
The Mirror
3
Michael Flynn May Have To Testify In Order To Withdraw Guilty Plea
US
4
'Get Rid Of Her': Recording Appears To Show Trump Ordering Removal Of Ambassador To Ukraine
Politics
5
KASSAM: A Robust Defense Of The President Should Use Every Second Of Time Available. Here’s Why...
Opinion