Kanye West says that he’s definitely running for president in 2024, while at the same time he urged black Americans not to just “vote Democrat.”

Does he have your vote?

When the audience laughed at his presidential hopes, the superstar rapper seemed to ignore them and continued.

“When I run for president in 2024, we would’ve created so many jobs that, in fact, I’m going to walk,” he said. (RELATED: Report: Khloe Kardashian Wants To Marry Tristan Thompson Following Cheating Accusations)

“What I’m saying is, when y’all read the headlines, ‘Kanye’s crazy,’ this and that, this and that, it’s like one in three African Americans are in jail and all of the celebrities are in jail also because they can’t say nothing,” he added. “They’ve got no opinion! They’re so scared!” (RELATED: Kanye West Defends His Support Of President Trump On Jimmy Kimmel Live)

The “Gold Digger” hitmaker then referenced how much attention he got back in 2005 when he claimed that President George W. Bush “doesn’t care about black people” following the aftermath of Hurricane Katrina. He has recently walked back those comments.

West also explained during the same interview that black Americans should use their power and not just “vote Democrat,” per Page Six.

“Own your power,” the rapper went on. “Your power is not to just vote Democrat for the rest of our lives. That’s not the power.” 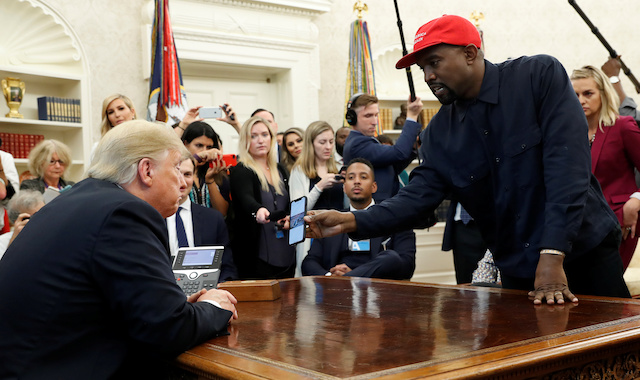 “The power is when I talk to my lawyer … I put on my trench coat and said, ‘We’re moving these factories to America, and that’s how it’s going to be’ — and it’s lovely.”

During the same event, he debuted a sneaker made of algae and shared that they “moved the headquarters to Cody, Wyo … Our goal is to bring the manufacturing back to America — South America, North America — bring it back Stateside and to present jobs for people back here.”

1
'We Just Saw The Pictures': Chris Wallace Challenges Hakeem Jeffries' Claim That Souvenir Pen Ceremony Was 'Solemn'
Media
2
Rod Rosenstein Approved Release Of Strzok-Page Text Messages, He Tells Court
US
3
Foster Friess Could Shake Up The Wyoming Senate Race
Politics
4
Lindsey Graham Unloads On Pelosi: She 'May Pray Privately, But She's Orchestrated The Trial Of Holy Hell'
Politics
5
'The Senate Is On Trial': Nadler Says The Impeachment Is No Longer Just About The President
Politics