Lockheed Martin, a major defense contractor that received $35.2 billion in taxpayer dollars in 2017, is promoting an anti-Trump video on Twitter that accuse the president of alienating American allies.

The video in question was posted by Axios on Twitter, and was promoted across the platform by Lockheed Martin. Tweets are marked as “promoted” when an advertiser pays money to extend their reach across Twitter. 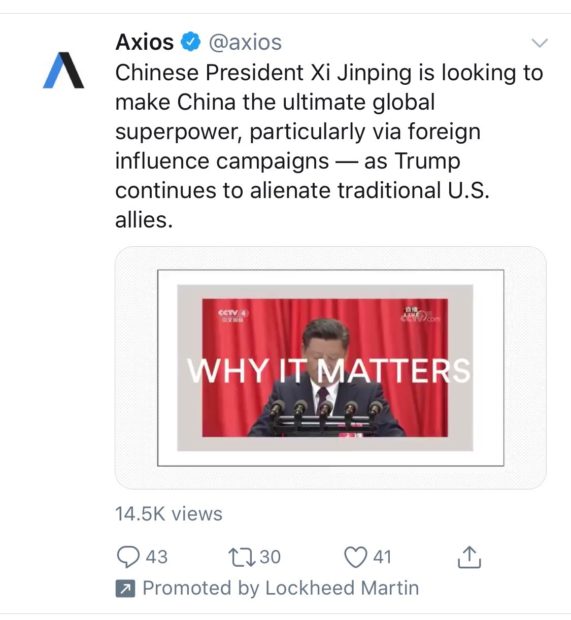 “Chinese President Xi Jinping is looking to make China the global superpower by 2050. But, it may come at a major cost to some developing nations,” an Axios reporter explains in the video, adding that Jinping wants to put China “center stage on the global scale.”

The video goes on to blame President Donald Trump for helping China rise to power by pulling out of international agreements such as the Trans-Pacific Partnership, the Paris Climate Agreement, and the Iran Deal. (RELATED: Lockheed Martin To Sell $37 Billion In F 35 Jets To 11 Countries)

It’s notable that Lockheed Martin is weighing in on foreign policy debates within the Trump administration given they are the world’s largest defense contractor. Nearly 70% of its sales in 2017 were paid for by American taxpayers, according to The Washington Post. Lockheed receives more federal funding than any other corporation, including Boeing.

A Lockheed Martin official sent the following to the Daily Caller after publication of this article:

‘We have an advertising deal with Axios, which includes filters on what content might be linked to our sponsorship. This post should have been filtered out. When we noticed it earlier today, we paused the sponsorship campaign to ensure the proper filters are in place going forward.”

This article has been updated to include Lockheed Martin’s response.