The transcript of a deposition given in October in the Democratic-led impeachment inquiry of President Donald Trump shows a heated exchange between Reps. Matt Gaetz and Adam Schiff, the California Democrat overseeing the impeachment push.

The argument took place early on in the Oct. 14 deposition of Fiona Hill, who served as the top White House adviser on Russia issues until July. A transcript of the deposition released Friday indicates that Gaetz, a Florida Republican, bust into the deposition room in Kool-Aid man-like fashion to protest that members of the House Judiciary Committee were not allowed to take part in the proceedings.

Schiff ordered Gaetz to “absent yourself” from the room. Gaetz protested and received support from GOP Ohio Rep. Jim Jordan, the ranking member of the oversight committee, which is one of the three committees taking part in the impeachment proceedings.

At one point during the tiff, Schiff said he would deduct from the time allotted to Republicans to question Hill because of Gaetz’s intrusion.

“Mr. Gaetz, you’re not permitted to be in the room,” Schiff said, according to the transcript.

“I am on the judiciary committee,” Gaetz shot back.

Schiff replied that the judiciary committee was not a part of the hearing.

“I thought the judiciary committee has jurisdiction over impeachment,” said Gaetz.

“Mr. Gaetz, you’re not permitted to be in the room. Please leave,” said Schiff.

“You’re going to include members of Congress on committees that have roles of impeachment,” Gaetz continued.

“Mr. Gaetz, take your statement to the press,” Schiff said. “They do you no good here. So please, absent yourself.”

U.S. House Intelligence Committee Chairman Rep. Adam Schiff speaks to members of the media outside a closed session before the House Intelligence, Foreign Affairs and Oversight committees at the U.S. Capitol on Oct. 28, 2019. (Mark Wilson/Getty Images)

GOP Texas Rep. Chip Roy attempted a similar breach during a deposition on Oct. 22 with Bill Taylor, the acting ambassador to Ukraine. Roy interrupted Taylor’s deposition to ask when transcripts of witness interviews would be released the to public. (RELATED: ‘This Whole Hearing Is Out Of Order’: Chip Roy Clashes With Adam Schiff Over Deposition Transcripts) 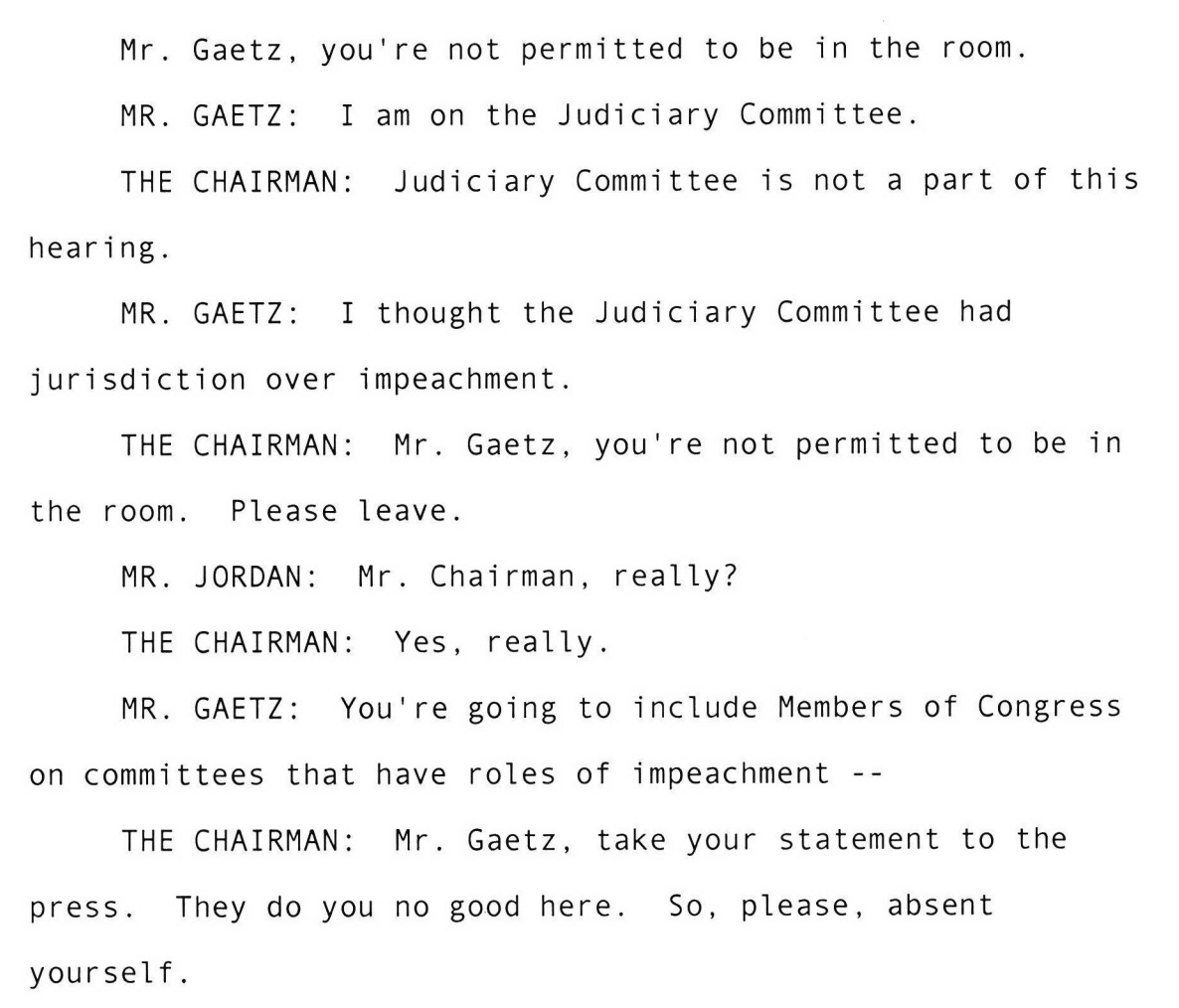