President Donald Trump was greeted with loud cheers and chants of “USA! USA!” at Saturday’s college football game between the Alabama Crimson Tide and LSU Tigers.

Fox Sports Radio host Clay Travis reported “cheers and chants” of USA as the presidential couple first appeared in the box before the game.

The president’s introduction to the crowd occurred during a CBS network commercial break, but the aftermath was caught when live programming returned. Alabama beat reporter Mike Rodak tweeted the reaction:

The biggest showdown of the year to date pits the number three ranked Crimson Tide against the number two ranked Tigers. Alabama is ranked number one in the Coaches poll and LSU sits at the top of the AP poll. 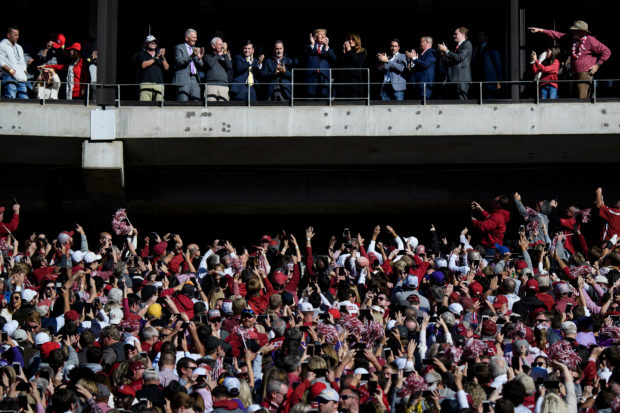 Trump’s attendance at two other recent sporting events was greeted with mixed reactions. Crowds booed and heckled the president at last month’s World Series game five in Washington, D.C., while a mix of boos and cheers greeted him at a UFC match in New York City last weekend. (RELATED: Alabama Drops Hype Video For LSU Game That Will Give Fans Goosebumps)

President @realDonaldTrump and @FLOTUS Melania Trump arrive in Tuscaloosa ahead of their attendance at the #LSUvsBAMA football game. pic.twitter.com/JWRYisjqDw

Trump’s potential attendance made the news early this week, and he is the first U.S. president to ever attend the annual Alabama-LSU game. President Trump also attended the 2017 national championship game between SEC rivals Georgia and Alabama.