Obama-era Democrats are still influencing foreign affairs, now through jobs at the United Nations and at other international organizations where Americans can help shape international politics in ways at odds with the Trump administration.

Before and after the start of Donald Trump’s presidency, Obama- and Clinton-aligned politicos took the positions, which are not U.S. government jobs but generally are the result of lobbying by U.S. officials. Many are entitled to keep the jobs indefinitely once they are in them.

Tensions between the Trump administration and employees in the foreign service and international organizations — including some that serve at the pleasure of the president — have repeatedly come to the fore in recent weeks. (RELATED: Ukraine Envoy Blasts ‘Concerted Effort’ By Ukrainians And Trump Allies To Take Her Down)

When President Donald Trump addressed the U.S. Mission to the United Nations on Sept. 26, “someone laughed loudly,” while others “spoke in hushed murmurs,” The Washington Post reported. (The mission consists of U.S. government employees interacting with the U.N., while some Americans also occupy jobs at the U.N. itself.)

The Americans who work in top jobs at international organizations wield significant influence and ordinarily get the jobs with the backing of the administration, Brett D. Schaefer, a United Nations expert at the Heritage Foundation who serves as a U.N. official after being nominated by Trump, told the Daily Caller News Foundation.

But because the slots aren’t federal jobs, they do not appear on the organizational chart of U.S. agencies and amount to some of the government’s more obscure nooks and crannies, he said.

Incoming presidents dole out some 4,100 federal jobs listed in the “Plum Book” to political appointees who share the president’s policy views. But inside the State Department, there is also an international version of the Plum Book, listing roles at the many trans-national organizations where U.S. leaders can place their people, Schaefer said.

They’re the type that would easily be overlooked by an outsider candidate like Trump, but their existence and importance were well-understood by Democrats inside the State Department, Schaefer said.

U.N. jobs are allocated to nationals largely based on the size of their country’s contribution, and the U.S. is the international body’s largest funder. Yet the U.N. has repeatedly taken positions at odds with the Trump administration.

U.N. actions during the Trump administration have led to headlines like “Charlottesville: United Nations warns US over ‘alarming’ racism;” “The U.N. says water is a fundamental human right in Detroit;” and “Taking Migrant Children From Parents Is Illegal, UN Tells US.” 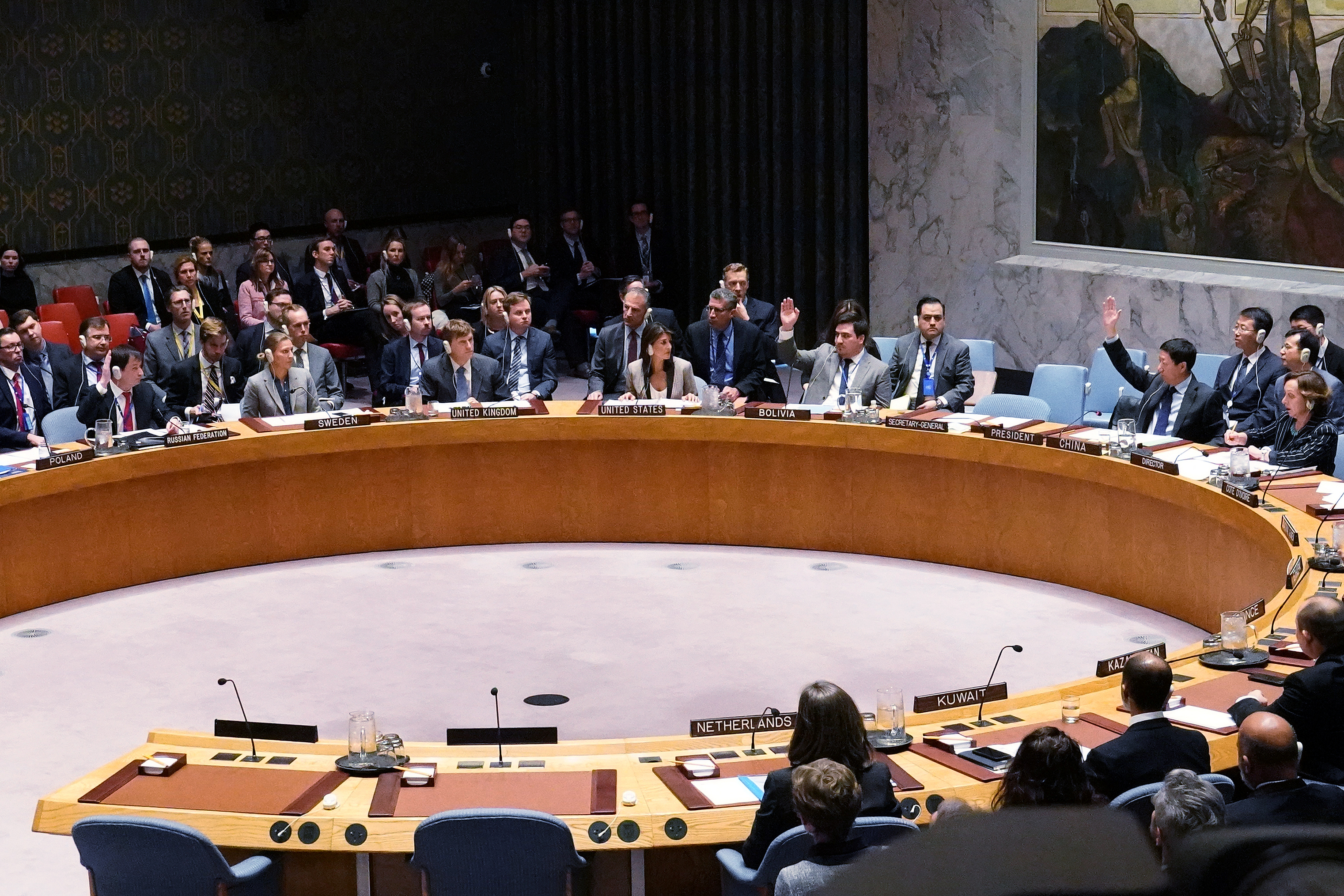 Examples of international roles staffed by people tied to Democratic circles during the Trump administration include:

World Food Programme: From April 2017 to July 2018, Max Finberg “managed the immediate office of the Executive Director. Assisted with his transition as the new head of the world’s largest humanitarian agency, with 17,000 employees, $6+ billion budget,” according to his LinkedIn. He also “[i]mplemented successful strategy to prevent budget cuts” as the Trump administration weighed a decrease in funding.

Previously, he worked in top jobs in the Obama administration at AmeriCorps, the Department of Agriculture, and the White House, as well as worked for a Democratic congressman. Just before he was appointed, on March 13, 2017, he tweeted that “Jews and Christians must oppose Trump’s ‘Muslim ban.'” While serving in the role, he advocated on Twitter for the U.S. to pay reparations for slavery.

International Labour Organization (ILO): In May 2016, seven months before Obama left office, Deborah Greenfield was named deputy director-general for policy. “Before joining the ILO, Ms. Greenfield served in the Obama administration as Deputy Solicitor for the U.S. Department of Labor,” her bio says. She was also a union official at the AFL-CIO.

Schaefer said the U.S. submitted her name and lobbied for her appointment, but now that she is in the job, she can stay there indefinitely. Until July 2017, the ILO’s director was Nancy Donaldson, who also worked at the AFL-CIO.

UN Relief and Works Agency for Palestine Refugees in the Near East: Elizabeth Campbell was appointed director of its Washington office in October 2017. Beginning during Clinton’s State Department tenure, she served in a career State Department position as senior humanitarian policy advisor. A bio says she studied “social justice.”

In 2018, the Trump administration said it would stop contributing to the organization, calling it “irredeemably flawed.” Schaefer said despite the U.S.’s historical contributions, its influence over UNRWA is limited because it is “beholden to the Palestinians.”

Until April 2019, the Trump administration did not have a confirmed ambassador, elevating Palmieri as one of the top officials tasked with scrutinizing groups such as the $2.6 billion UN Food and Agriculture Organization (FAO). The Washington Free Beacon reported in June 2018 that conservatives were incensed that Palmieri did not push back against what they said was socialism and mismanagement at FAO. (FAO is headed by Jose Graziano da Silva, who served as food minister for since-jailed, socialist Brazilian President Luiz Inácio Lula da Silva.)

She is married to Francisco Palmieri, who during the Obama administration “served as Deputy Executive Secretary in the Executive Secretariat, where he managed the flow of information to Secretaries [John] Kerry and [Hillary] Clinton,” his State Department bio said. In the absence of a Trump administration appointee, he served as Acting Assistant Secretary in the Bureau of Western Hemisphere Affairs from January 2017 to October 2018.

Inter-American Development Bank: Until June 2018, its executive director for the U.S. was Mark Lopes, who was appointed by Obama in 2014 and previously worked for Senate Democrats. The U.S.’s IADB director is a president-nominated, Senate-confirmed position.

The Obama administration boosted spending on international organizations to at least $9.2 billion in his last year in office, at least 20% higher than 2010, which could be expected to give the U.S. even more influence.

“It’s a lot of money, and it’s something that if we’re going to be sending taxpayer dollars, we have a responsibility to making sure its going to its intended purpose,” Schaefer told the DCNF.

CNN reported in October that U.N. officials play a role in determining who eventually comes to the U.S. as refugees and that they were taking bribes to put “fake” refugees on the list.

“It is at the very beginning of the process — before the applicant even gets to the US embassy vetting, the selection has been done at the U.N. level,” a middleman involved in the bribery told the outlet. A Kenyan told CNN, while “fidgeting in his expensive white sneakers,” that he paid $300 to get on a refugee list for Somalians.

In 2018, Ugandan officials allegedly attempted to fleece the international community by telling the U.N. it was housing 26,000 refugees, when only 7,000 were found, USA Today reported.

Though the Americans working at the U.N. are not federal employees, U.S. leaders often have significant control over their appointments.

“Certain positions are essentially considered to be U.S. slots, and the U.S. would put forward three or four candidates for the secretary general to choose from,” Schaefer told the DCNF. “It is an informal result of pressure, influence, lobbying and tradition.”

For example, “the top UNICEF slot always goes to an American, and normally when a new president comes in, the UNICEF head submits his resignation. But a big problem in this administration was they just didn’t have a list of people,” Schaefer added.

The Obama-era UNICEF director, Anthony Lake, was a former advisor to Obama’s presidential campaign, and before that, he was a campaign advisor and administration official for Bill Clinton. He remained at UNICEF an extra year until Henrietta Fore, who the U.S. put forward, was installed.

One of the top slots slots in the U.N. bureaucracy, the undersecretary-general for political affairs, is held by Rosemary DiCarlo, a career U.S. foreign service officer who worked in the Obama administration as ambassador to the U.N. between Susan Rice and Samantha Power.

She did not take the role until April 2018, leaving the Obama-era jobholder, Jeffrey Feltman, in place until then.

“He would have left earlier if the administration had someone in mind. The U.S. wasn’t pressing for him to be replaced, and there was no obligation for him to resign,” Schaefer said. Feltman was among the signers of a letter that called Trump’s actions regarding Ukraine a “profound national security concern.”

Career foreign service officers like DiCarlo sometimes serve in U.N. roles, but a president would “want someone that’s aligned with [him],” Schaefer said. “It’s easier for Democratic administrations to put career people in because [career State department employees] tend to share their outlook,” he continued.