Britton, 60, has gone through several relapses over the past three decades but has been clean for more than four years after receiving support from the nonprofit organization Easterseals, which provides services to people with disabilities and helps veterans transition back into their communities after receiving treatment for drug use or other traumas.

Britton currently works at a nonprofit volunteer organization called Volunteers of America (VOA) — a job Easterseals helped him secure — using his experience to help reintegrate offenders and veterans back into their communities.

The retired Marine is from Dayton, Ohio, and joined the Corps in 1977.

“At a young age — in high school — I reached a point in my life when I wanted to make a decision and join the Marine Corps. That’s what really stood out to me was being a United States Marine, and I got the opportunity to make that happen,” Britton told the Daily Caller News Foundation.

“The hardest part about being a Marine is discipline. … You have to stay disciplined. You have to stay focused to do what you’re trying to do and accomplish as a Marine. It’s a very prideful branch of the military, so you have to take pride in yourself in order to maintain the stability necessary to be a Marine,” he said.

“The best part about being a Marine is carrying that name. Marine. It’s just a whole lot of pride that goes with being a Marine. Even to this day, I honor that. The code of the Corps. Just being able to carry that title of a Maine — that never goes away. I love the Corps still,” Britton added. 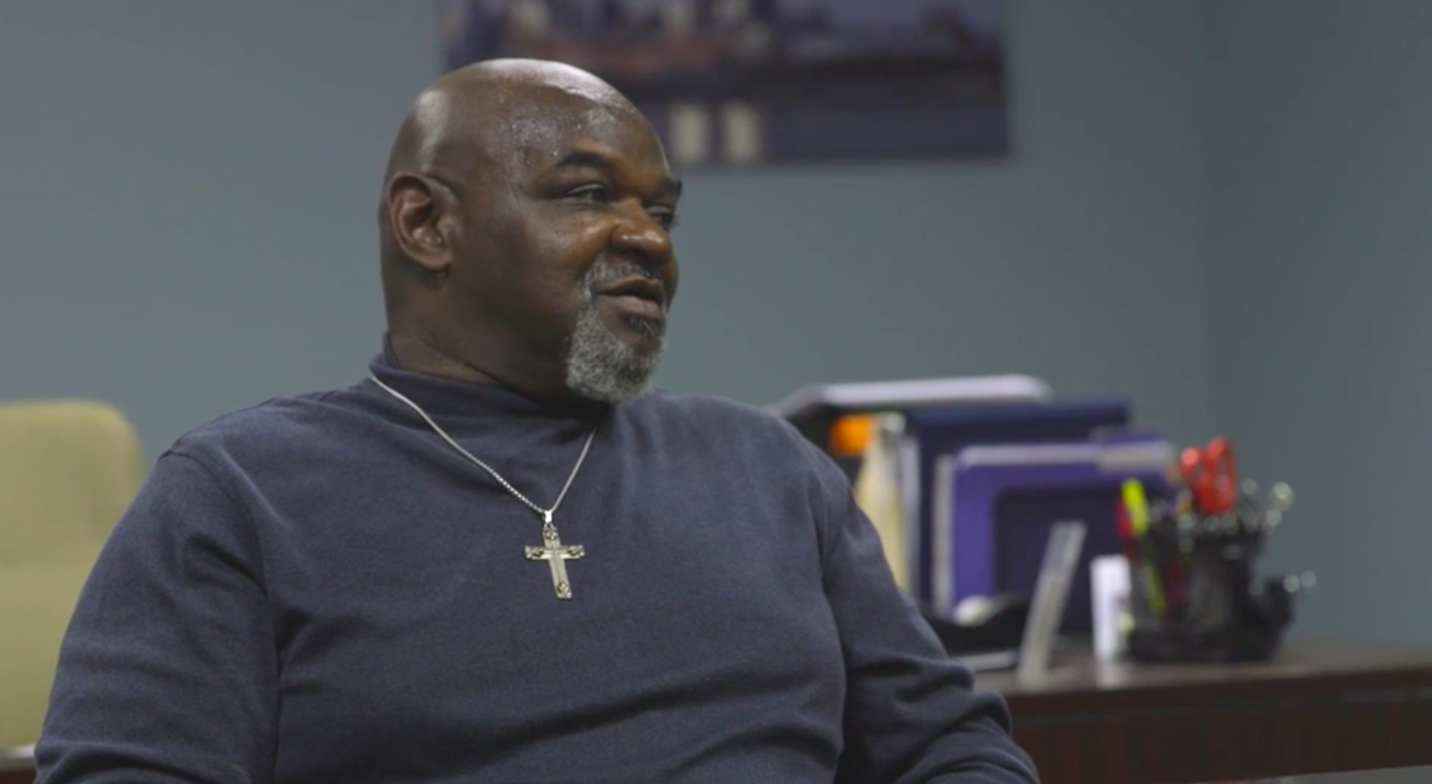 But despite the honor that comes with carrying a military title, Britton said he feels for the veterans who can’t get the help they need after coming home from war, especially those who fought in Afghanistan, Iran and Iraq.

“These guys, when they come home, they’re not getting the help they need to endure what they went through,” he told the DCNF. That’s part of the reason so many veterans suffer from addiction, especially now while the opioid crisis is sweeping through the country.

More than 130 people died of an opioid overdose every day in the U.S. in 2017, amounting to more than 47,000 deaths from opioid overdoses that year, according to the National Institute on Drug Abuse (NIDA) citing 2018 data from Center for Disease Control and Prevention (CDC) and the National Center for Health Statistics (NCHS).

Britton’s drug addiction started about four years after he finished his service as a Marine in 1985. (RELATED: Judge Rules Men Who Lied About Being Veterans Must Wear Signs That Say, ‘I Am A Liar’)

“It wasn’t something that I was seeking out. It just happened. About four years after I got out [of the Marine Corps], I was dipping and dabbing in marijuana and, all of a sudden, I was introduced to crack cocaine and from there, my addiction just kind of took off. Once I got a taste of crack cocaine, it just held onto me for years,” Britton told the DCNF.

Three years later, he went to a VA clinic in Dayton to take part in a 28-day treatment program, which helped him for about a year until he relapsed and sought treatment again.

“I had a friend in the Marine Corps. We used to get high together. But one day he just said a prayer and asked God to take the addiction off of him, so I said the same prayer, and I was good for another four or five years. Productive. But then in about 1999 coming into 2000, I relapsed,” Britton said.

“That was my second relapse. I felt a had a hold of it because I was going on five years clean, and then it became a cycle. Three, four, five years until I would go back and use again,” he added.

Britton said he needed more structure to get a real hold on his addiction, and that’s when he sought out Easterseals.

Easterseals, which works directly with the VA and partners with CVS Health Foundation, has served 785 veterans, including 143 veterans who are trying to overcome addiction who have received treatment, intervention or referral services — many of whom are currently in recovery.

“An individual may be unemployed or underemployed or maybe they just need a change in careers, and I’m a testament to that. … I was in the process of retiring from the Air Force — about six months out from retirement — and Easterseals found me on LinkedIn and offered me this opportunity, which I just couldn’t pass up because it gave me the opportunity to continue to serve,” she said.

“Our goal is to expand what’s available to our veterans because we know some of them may be able to access care through the VA or the Defense Department, but not all of them are able to based on their discharge status,” Neal-Walden explained. “So, we’re able to bridge that gap.”

“We have great access to care,” she added. “We are able to see people within a week — sooner if it’s more emergent — and we really focus on some of those barriers to care. Access is one. Another is hours of operations. We’re open on evenings, we’re open two weekends per month, we provide childcare during appointments, and we also provide telehealth.”

Britton first came to the nonprofit simply by knowing its name as an organization that helps veterans. Easterseals helped him get a job at the Greater Dayton Regional Transit Authority (RTA), where he eventually became a supervisor.

“We provide opportunities. I was a recipient of the opportunities Easterseals offers, and I get to give back what was given to me. Frank is a perfect example of what a veteran can do if they do the program,” Macklin told the DCNF.

“More than anything, Frank and I can identify with each others’ stories. We have small differences, but the main plot is the same. Just being able to identify and connect on that level is enough to start a relationship,” he said.

“We’re better friends than we are anything else. It’s not just a client-counsel relationship or anything like that. We’re just friends. We give each other advice. We depend on each other to make the right decisions — not just for his future but for mine, as well,” Macklin continued.

The Army veteran added that Easterseals’ “person-centered approach” is what works for so many of the people that come to the organization for help.

“It’s what worked for me when I was struggling and needed to go through a program, and that’s what we try to apply now. It’s based on the client’s self-determination versus what we think will work for them. It’s their involvement and what they want to do with their life that’s more important,” he said. 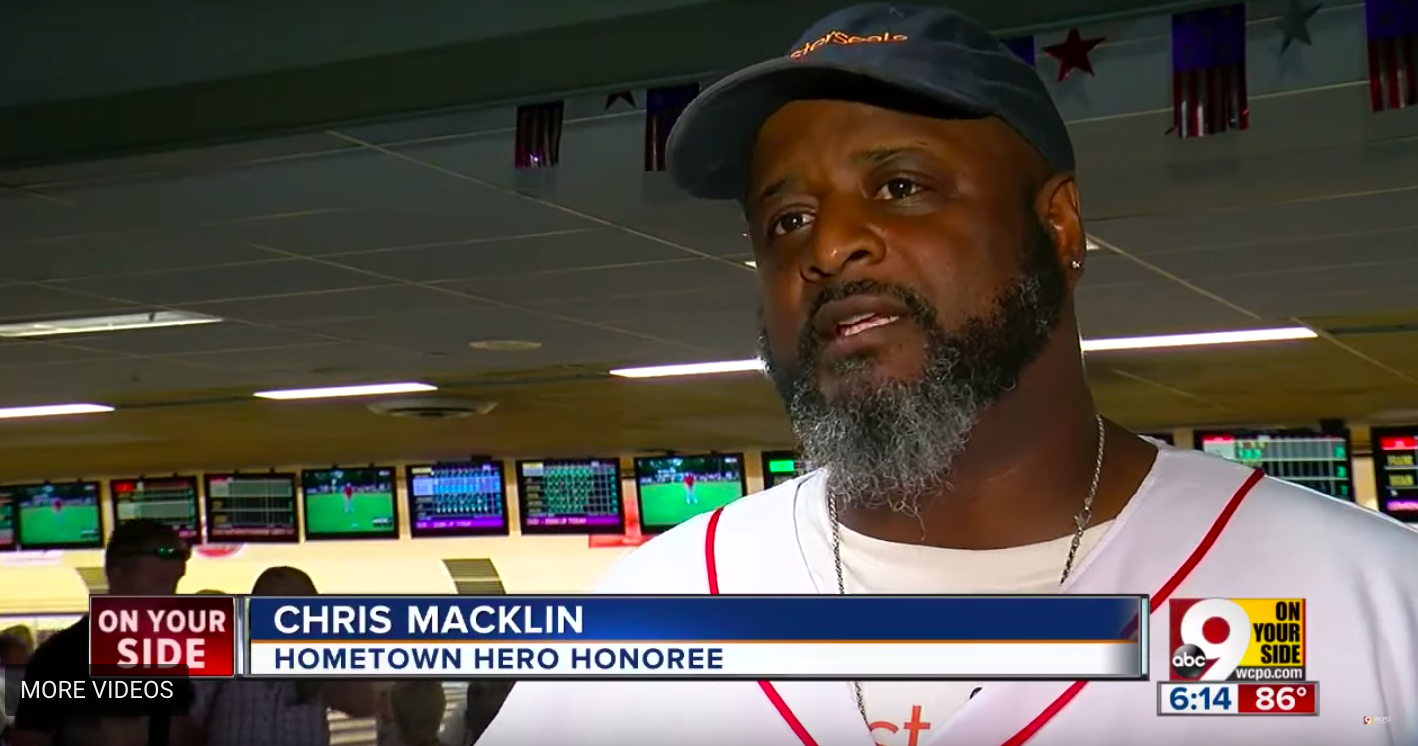 Chris Macklin at Bowling for the Brave/ WCPO.com/ YouTube

Britton said Macklin “played a big part” in his most recent recovery.

Britton currently works for VOA as a reentry specialist. He was a resident at VOA 20 years ago for rehabilitation. That’s where he also met his girlfriend, whom he hopes to marry.

“I’m able to reach out to touch some people, and I can see that every day that I go to work. It’s something I look forward to that I’m able to do this because I can talk to [younger people] and, even though there’s not many veterans here, the ones I talk to are actually making strides and changes in their lives. They’re seeking out help for employment and mental health,” Britton said.

“I’m productive, I have a meaningful job with VOA. I have a roof over my head. I’m not out on the streets. My life is better because of the fact that I’m not using. First and foremost, I have God in my life. I have a beautiful, beautiful queen in my life. I plan, one day, to make her my wife, which is motivation to do the right thing,” he added.

Britton’s advice to others suffering from addiction is to redirect one’s focus from drugs onto oneself.

“Get refocused on yourself. Love yourself. Because sometimes we get to a point in our addiction when that’s all we have and that’s all we live for, and we have to come to a conclusion that we have to have better lives for ourselves and love ourselves,” he said.

“I trust in God and I trust myself. You have to tell yourself that you’re going to overcome the barriers of addiction and barriers through life that come with addiction. It’s just part of the equation of being an addict. You have to learn how to live with that and learn to accept that and do better,” he continued.

Britton said that to convince someone to get help, he would just tell them to follow his lead. (RELATED: Feds Apologize After Veterans Affairs Removed Bible: ‘Will Not Be Bullied On This Issue’)

“I try to lead by example. As they say, you can lead a horse to the water, but you can’t make it drink. By me going through it myself and going in and out and in and out [of addiction], now I’m at the point where I’m making decisions to be productive in my life and doing the right thing. Having the right mindset to be successful.”

“My philosophy is don’t use no matter what. No matter what, just don’t get high. You have to make a choice for yourself and say, ‘This is not the way I want to live.’ I wish I could make that decision for the country.”