Sure, tweets can be misinterpreted.

But when you insult a GOP congresswoman by suggesting she was elected because she was a woman, you don’t need a brain transplant to understand what he means.

Unless you’re Matthew Dowd, who put his reputation into the toilet Wednesday after clearly insulting Rep. Elise Stefanik (R-N.Y.).

“Hey @EliseStefanik I just want to apologize for a tweet that is being misinterpreted,” the ABC correspondent wrote this afternoon on Twitter. “I didn’t mean to suggest you were elected only because you were a woman or a millennial. I deleted the tweet.” 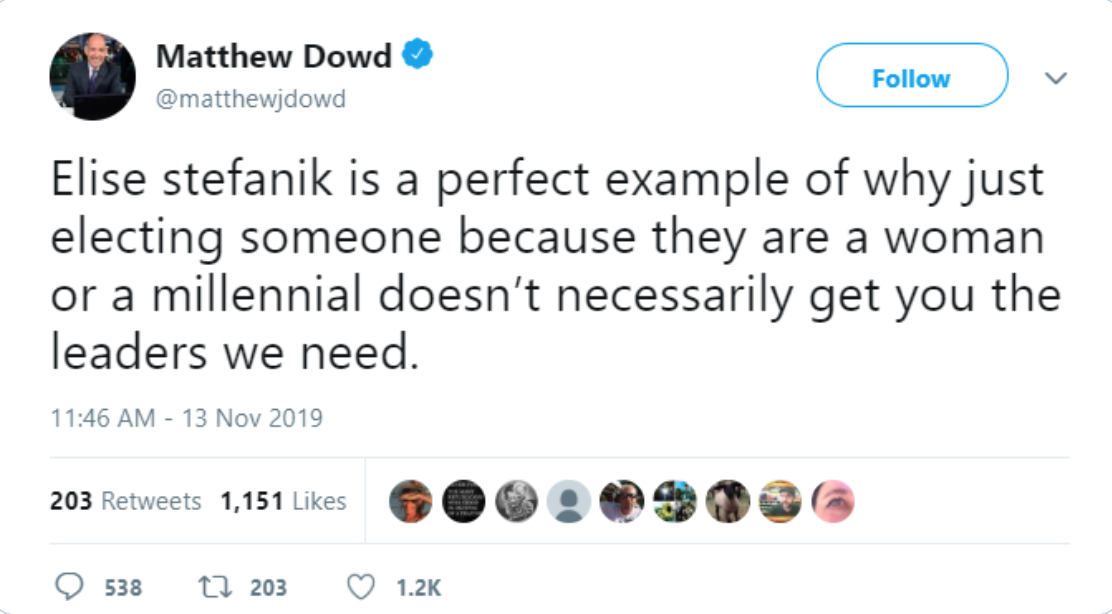 “@matthewjdow is being a sexist pig towards a strong, female Republican because he doesn’t like her not being a puppet for Adam Schiff??” Houck wrote. “Go figure. Thankfully, I won’t hold my breath on the Zuckerbots @brianstelter and @oliverdarcy to call this out.”

Stefanik initially barely knew who Dowd was, but she knew enough to know he was insulting her. She sits on the House Intelligence Committee, which is overseeing the House impeachment proceedings. Stefanik mistook Dowd for a lefty MSNBC reporter.

“Thx @RepMarkMeadows! It’s a good thing I wasn’t raised to measure my self-worth or professional work based on tweets from self-important @MSNBC commentators like Dowd (who is he again?)!” the congresswoman tweeted. “I earn support from #NY21 voters bc of my focus on keeping my promises & delivering #Results.”

Early in Wednesday’s hearing, Stefanik pushed Chairman Adam Schiff (D-Calif.) with a point of order. “Will you be prohibiting witnesses from answering members’ questions as you have in the closed door depositions?” she asked.

She also spoke up for President Trump.

“Isn’t it the case that the Trump Administration has provided substantial aid to Ukraine in the form of Defensive Lethal Aid, correct?” she asked one of the witnesses, Acting U.S. Amb. to Ukraine William Taylor.

Not that she needed it, but Stefanik’s colleague, Rep. Mark Meadows (R-N.C.), had her back.

“Elise did a great job laying out the facts. And, not least of all, this comment is reprehensible,” Meadows wrote, linking to Dowd’s now deleted tweet.

Stefanik is not buying Dowd’s reasoning that his words are being misunderstood.

But she is willing to forgive him.

“Apology accepted @matthewjdowd – @ABCPolitics should be ashamed of your comment,” she wrote late Wednesday afternoon. “This is one of the reasons young women don’t run for office.”

Dowd grotesquely replied, “Thank you. As you know Elise I have advocated for women and millennials getting involved in politics for years. And have helped many.” (RELATED: ABC’s Chief Political Analyst Should Keep His Day Job And Stop Trying To Play Pastor)

Back in 2016, longtime Hillary Clinton supporter Donna Brazile, who now works for Fox News, implied that she was maybe, sort of sexually attracted to Dowd — at least when she’s bored.

In case Dowd needs a few of Stefanik’s credentials, she’s a Harvard grad and the youngest GOP woman ever elected to Congress.