Key independent voters are uninterested in the details of the impeachment inquiry against President Donald Trump, according to focus groups conducted by America First Policies (AFP).

AFP held 18 focus groups over the past two months in Charlotte, Columbus, Atlanta, Pittsburgh, Detroit, Des Moines, Orlando, Phoenix, and Miami with self-identified independent voters on the 2020 election and impeachment. The voters did not know they would be talking about politics when they were selected for the focus groups, a source close to AFP explained.

The voters did not mention Ukraine, an alleged quid pro quo, Rudy Giuliani, or any other key details about the House Democrats’ impeachment inquiry, according to videos of the focus groups reviewed by the Daily Caller. Instead, the focus groups expressed concerns about the largely closed-door process and the fact that the inquiry is a distraction from other issues that they care about.

“I don’t think the majority of the country cares. They want the problems solved,” one focus group member said, while another questioned, “Why the focus on impeachment when you can vote out Trump next year?”

Several focus group members compared the current impeachment inquiry to the Russian collusion narrative, pointing out that there was no “smoking gun” in the entirety of the Mueller probe, and accused Democrats of using the process to further divide the country.

Others said Democrats are not going about the inquiry “the right way,” asserting that the “sneaky” process “proves they don’t have anything.” 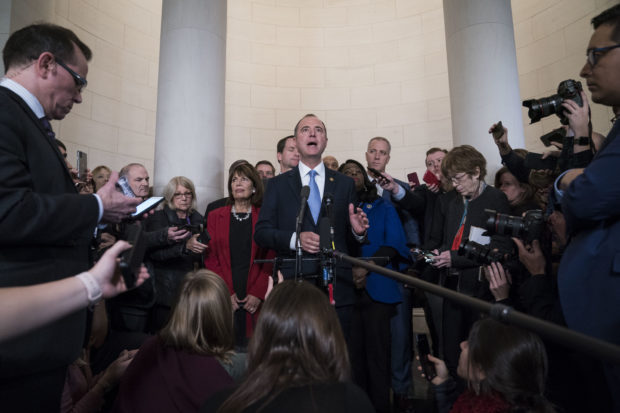 The focus on the process suggests that Republican talking points are reaching independent voters. House GOP members repeatedly hammered the fact that the first round of hearings were conducted behind closed doors, in a SCIF, and without representation on behalf of the president or the White House. (RELATED: McConnell On Dismissal Of Trump Impeachment Articles: ‘We’ll Have To Have A Trial’)

The focus group responses bolster Democratic concerns that the details of the impeachment inquiry are too convoluted for the non-DC crowd to follow along. Democrats have quickly shifted their rhetoric surrounding impeachment, abandoning allegations of a quid pro quo and instead using the word “bribery,” which they believe resonates more in middle America.

A source close to AFP agreed, “Unless you’re living in DC you can’t keep up with the ‘show.'”

“People find impeachment to be too much, too confusing. They brought up Russia, but no one mentions Ukraine,” the individual familiar with the focus groups said. “There’s frustration that they’re not getting anything done.”