Chick-fil-A announced a new initiative Monday that will focus on education, homelessness, and hunger and end 2020 donations to two charities criticized by LGBTQ groups.

The organization announced Monday that the Chick-fil-A Foundation is instituting a “more focused giving approach to provide additional clarity and impact with the causes it supports” by donating to education, homelessness, and hunger, according to a Chick-fil-A press release. As part of this initiative, the organization has committed $9 million in 2020 to Junior Achievement USA and Covenant House International.

Chick-fil-A will also “support more than 120 communities by dedicating $25,000 to a local food bank at each new Chick-fil-A opening,” the organization said in a press release. (RELATED: Democratic Candidates Speak Out On Christian Faith’s Compatibility With LGBTQ Issues)

Chick-fil-A has donated more than $52 million since the organization began to “support education, entrepreneurship and leadership development,” according to a Chick-fil-A press release. But Chick-fil-A will also reassess its “philanthropic partnerships” and will not donate to the Salvation Army and the Fellowship of Christian Athletes in 2020, the organization confirmed to the Daily Caller News Foundation.

Both of these organizations have drawn criticism from LGBTQ groups for their stances on homosexuality.

“Our goal is to donate the most effective organizations in the areas of education, homelessness, and hunger,” president and COO of Chick-fil-A Inc. Tim Tassopoulos told the DCNF. “No organization will be excluded from future consideration – faith based or non-faith-based.”

The Salvation Army spoke out in statement Monday, saying they are “saddened to learn that a corporate partner has felt it necessary to divert funding to other hunger, education and homelessness organizations — areas in which The Salvation Army, as the largest social services provider in the world, is already fully committed.”

“We serve more than 23 million individuals a year, including those in the LGBTQ+ community,” the Salvation Army said in a statement to the DCNF. “In fact, we believe we are the largest provider of poverty relief to the LGBTQ+ population. ”

The organization also urges the public to “seek the truth before rushign to ill-informed judgment.” 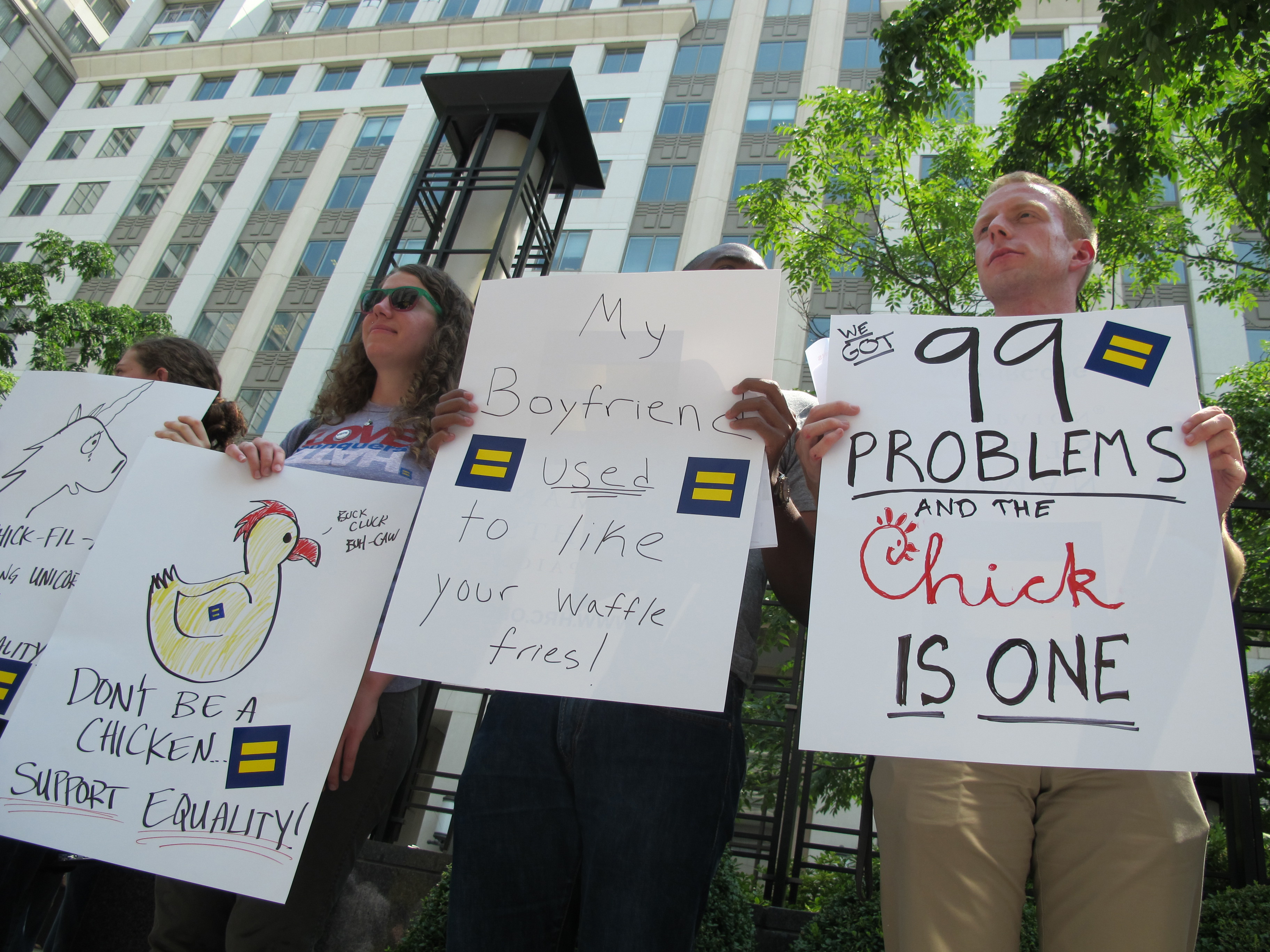 Protesters hold signs and shout slogans outside a Chick-fil-A food truck in a mid-day demonstration organized by the Human Rights Campaign in Washington on 26 July, 2012 after the fast-food firm’s president Dan Cathy came out against marriage equality in the United States. AFP PHOTO/Robert MACPHERSON (Photo credit should read Robert MacPherson/AFP/GettyImages)

“We are incredibly excited to be the Chick-fil-A Foundation’s education partner and to make a positive difference in the lives of countless young people as a result of this initiative,” president and CEO of Junior Achievement USA, Jack E. Kosakowski, said in a statement. “Chick-fil-A has been a dedicated supporter of JA programs for many years, and we look forward to working together to reach even more kids through this latest commitment.”

President and CEO of Covenant House International Kevin Ryan also praised the move, saying in a statement that the organization welcomes Chick-fil-A’s support and the “efforts of local Chick-fil-A operators to hire and train young people as they overcome homelessness and cross that bridge from despair to hope.”

“Millions of children and youth face homelessness each year, including kids who have endured traumatic and adverse childhood experiences,” Ryan said in a statement. “The young people we serve are usually disconnected from their families and other social support, and we are committed to helping them all overcome hunger and homelessness.”

The Fellowship of Christian Athletes did not yet respond to requests for comment from the DCNF.