President Donald Trump angrily re-enacted several key lines from US Ambassador to the European Union Gordon Sondland’s testimony in the impeachment inquiry on Wednesday while leaving the White House for Texas.

The president departed the White House nearly an hour behind schedule, reportedly due to the fact that he was watching Sondland’s testimony live. Trump stopped to address reporters before boarding Marine One and was holding a stack of papers, including handwritten notes about his conversation with Sondland in July regarding Ukraine investigations into Burisma and the Biden family. 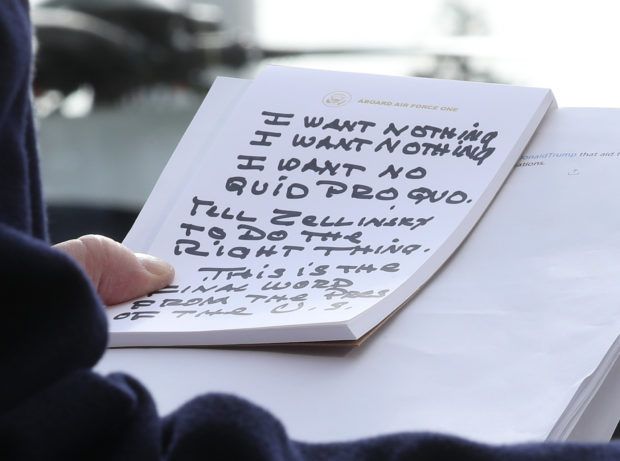 Trump spoke briefly about his trip to Texas and his trade war with China before recounting Sondland’s recollection of the phone call verbatim. (RELATED: Gordon Sondland Says Zelensky ‘Didn’t Actually Have To Do’ The Investigations Into Hunter Biden, Only Announce Them)

“Ready, do you have the cameras rolling?” the president asked reporters before the reenactment.

“I want nothing. That’s what I want from Ukraine,” Trump read sharply, his voice booming over the press gaggle. “I want no quid pro quo, tell Zelensky to do the right thing.”

Trump insisted that Sondland’s testimony “means it’s all over” as Sondland said the president made clear to him that he did not want to make military aid to Ukraine contingent on investigations.

“I want nothing. That’s what I want from Ukraine.”

“I want no Quid Pro Quo, tell Zelensky to do the right thing.” pic.twitter.com/RdBCqeQYTo

Trump also claimed Sondland mischaracterized him as being angry on the phone call, stating, “I’m always in a good mood. I don’t know what that is.”

After his re-reading of the testimony, the president boarded Marine One without taking additional questions from reporters.