The ads, which were scheduled to air this week on “Fox and Friends” in the Washington, D.C., market and in 13 GOP-held congressional districts, feature military veterans urging Republican representatives to “put country over politics” by holding Trump accountable for “abusing his office and risking national security for his own gain.”

Each of the ads contains a disclosure stating they’re paid for by “Defend American Democracy,” but D.C. business registration documents reveal the group is just one of the many projects of the Sixteen Thirty Fund, a dark money nonprofit that pumped $141 million into liberal causes in 2018 alone, Open Secrets reported.

The Sixteen Thirty Fund reported receiving $52 million from a single anonymous donor in 2018, but as a 501(c)(4) nonprofit organization, it is not required to disclose the identity of its donors.

But other nonprofit organizations are required to disclose if they gave money to the Sixteen Thirty Fund. One of Soros’s primary donation vehicles, the Open Society Policy Center, has given $4.5 million to the fund between 2012 and 2017, according to their Form 990 annual disclosures. (RELATED: Soros-Linked Group Will Spend Millions To Stop Kavanaugh)

“Defend American Democracy” does not disclose its affiliation to the Sixteen Thirty Fund on its website, however it does state its a project of “Protect The Investigation,” which is another such project of the Fund.

“Defend American Democracy” did not immediately return a request for comment.

The Sixteen Thirty Fund raised an unprecedented amount of money in 2018 as a liberal dark money group, Robert Maguire, a research director for the liberal watchdog group Citizens for Responsibility and Ethics in Washington, told Politico.

“In terms of the size of dark money networks, there are only a few that have gone into the $100 million-plus range,” Maguire said. “These kinds of totals aren’t unheard of … I do think they’re unheard of on the liberal side. I think that’s what’s so striking about this.”

“Defend American Democracy” is just one of the dozens of projects operated by the Sixteen Thirty Fund. Its most well-known project is “Demand Justice,” which spearheaded the effort to stop Supreme Court Justice Brett Kavanaugh’s confirmation in 2018. 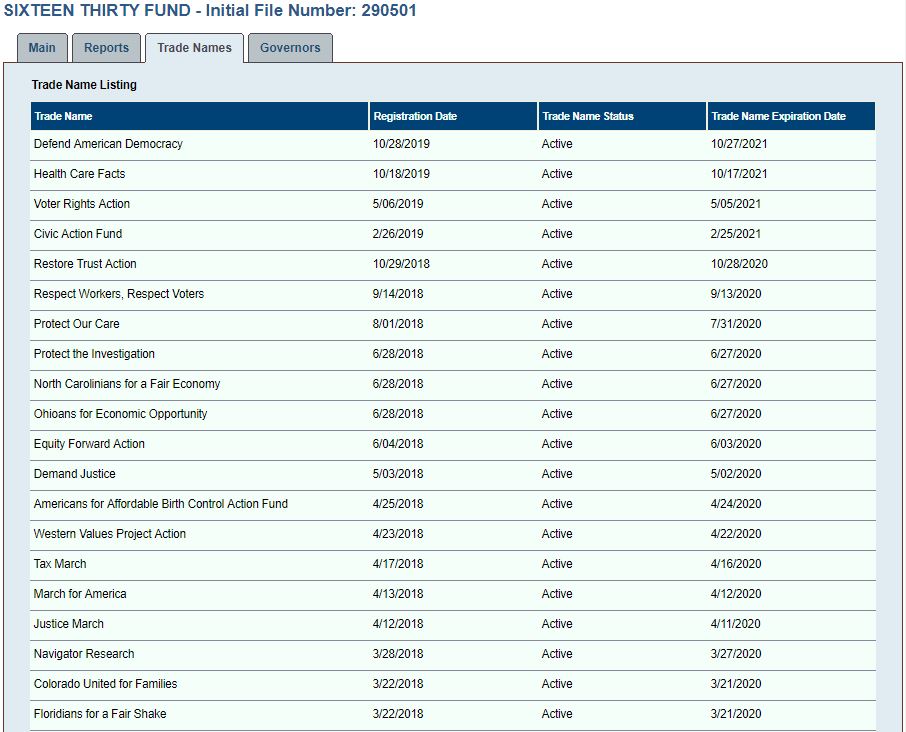 The 20 most recent projects launched by the Sixteen Thirty Fund, a liberal “dark money” group. (D.C. Department of Consumer and Regulatory Affairs / Screenshot)

In addition to operating dozens of projects, the Sixteen Thirty Fund is also a major source of funding for liberal nonprofit groups nationwide that push for reforms at the state and national level, Politico reported. The Fund disbursed $91 million to 95 separate groups in 2018, according to its most recent Form 990.