A Howard County, Maryland, school board voted Thursday to implement a busing initiative opposed by the vast majority of the public.

Board members took one of the “no” voters into a back room after an initial vote failed. She changed her vote when she reemerged.

Board member Kirsten Coombs voted “no” after board member Jennifer Mallo motioned to move a swath of children out of their schools to try to balance poverty rates. It failed 4-3, and people clapped. “I move that we go into recess to consider the impact of the failure of that last motion,” Mallo said.

Coombs appeared to be crying when they came out of the back room and said the board should vote again “because otherwise the entire plan falls apart.”

The board redid the vote, with Coombs’ voice cracking as she said “yes.” The vote was part of a series taken by the board that, together, resulted in the large-scale moving of children to different schools based on their parents’ income, effective in 2020.

Residents of the center-left county are in shock that the board passed a busing plan will move about 5,300 children from their neighborhood schools to balance poverty, despite almost unanimous opposition in the testimony the board heard, and the school system’s own data showing no connection between equal demographics of schools and more equal performance of demographic groups.

Sarah Bedair, a resident who testified before the board, told the Daily Caller News Foundation that the board received 6,650 pieces of verbal and written testimony opposing the plan and 150 pieces of testimony in support of it.

The social engineering plan micromanaged the flow of children to such an extent that in some cases, students will be moved to a new school that contains only four classmates from their old school, parents said.

Mallo spent four minutes scolding the public on Nov. 7 for noisily voicing their opposition to the plan and lamenting that the Open Meetings Act gave them the right to be there.

“Our community is watching you. We have chosen to support each other as board members,” Mallo said. “We are not denigrating to each other. We do not raise our voices to each other.”

We do not call each other names. We don’t intimidate each other and we don’t bully each other. Unfortunately, our community has chosen to do the opposite. You are allowed in this meetings through the Open Meetings Act. Your behavior must conform with the [civility policy]. It has not done that. Many of you have had side conversations that cannot continue. … That will stop today. …

The Open Meetings Act allows you to be here. We expect you to take that privilege and respect your fellow audience members. From here on out, all signs must be displayed no higher than your chin. … They will not be waved. If they are waved, if they are above your chin, if the side conversations continue, you will be asked to leave. … We are public servants, some of the board members make $15,000 a year and the ones most recently elected make $16,000 a year. … So on social media, please stop attacking us.

Coombs and Mallo did not return requests for comment.

On Facebook, where nearly 5,000 people joined a group to oppose the moves, numerous people who grew up in the Soviet Union and in Communist China said that the busing, and the process through which it was implemented, had the hallmarks of a communist regime.

Ming Du wrote to Mallo: “It was a sad day, Ms. Mallo, a very sad day — you have completely repainted the image for the elected officials in a democratic society. I’ve never felt so belittled in front of a government official in America, and I was stunned to hear you rebuking your constituents, a scene I have not seen ever since I left the tyrannic China 26 years ago. … I thought America is different, until Nov 7, 2019.”

Martin Dimitrov said, “I grew up in Bulgaria during the socialism and what transpired with the redistricting brings horrible flashbacks from totalitarian times. This is slippery slope, folks, be vigilant and stay engaged.”

Anton Dmitriev said, “I grew up in the Soviet Union and the ‘great fight for social justice’ is a slogan straight out of the old soviet propaganda posters. … [Vladimir] Lenin and [Joseph] Stalin used the quote ‘The End justifies the means’ all the time – if the goal is morally important enough in their view, any method of attaining it is acceptable. And there we have it — corruption, wrong data, communities broken apart. … So, as an independent voter myself, I urge this group to become an educational resource to the over 300k residents of Howard County on the dangers of blind ideology.”

Jianning Zeng, who is from China, said board chair “Mavis Ellis is a dictator. For those who don’t respect people, they deserve not be respected. They should resign from their [Board of Education] BOE position. Be alert, when an elected body tells citizens that they can not even silently & politely express themselves- that the tyranny of communism.”

Niyada Hin, from Cambodia, said, “The reason I emphasized socialist ideology is, because I have lived in a regime that worshiped it. Communist, to be exact. Socialism is just a milder form of communism but is still a progressive path toward it. Nothing does more damages to a country and human lives than these ideologies when put into practice. … You would not know it until you live it. And I have lived it. … You can ask any Cambodian, they will tell you which regime(s) to avoid.”

Ellis told The Baltimore Sun her only regret is that more children were not moved. (RELATED: ‘Students Of Color Increasingly Agree That The First Amendment Goes Too Far,’ Survey Finds)

“We have made some modest gains in terms of the capacity and the socioeconomic issues we were hoping to address in the redistricting,” she said. She said she would have preferred to “have moved more students and had a more leveled out [poverty] rate throughout the whole school system.”

The county council said it wanted to balance the racial distribution of the county at each school, but the Supreme Court has ruled against the practice, and the school board used poverty as measured by students’ participation in the Free and Reduced Price Meals (FARM) program, with poor children becoming the constantly uttered acronym FARMs.

An activist group called the Century Foundation said that research shows that poor children’s academic performance increases when they attend the same schools as wealthier students, but Howard’s data show no correlation between the overall demographic makeup of a school and the extent of what’s called the “achievement gap.” 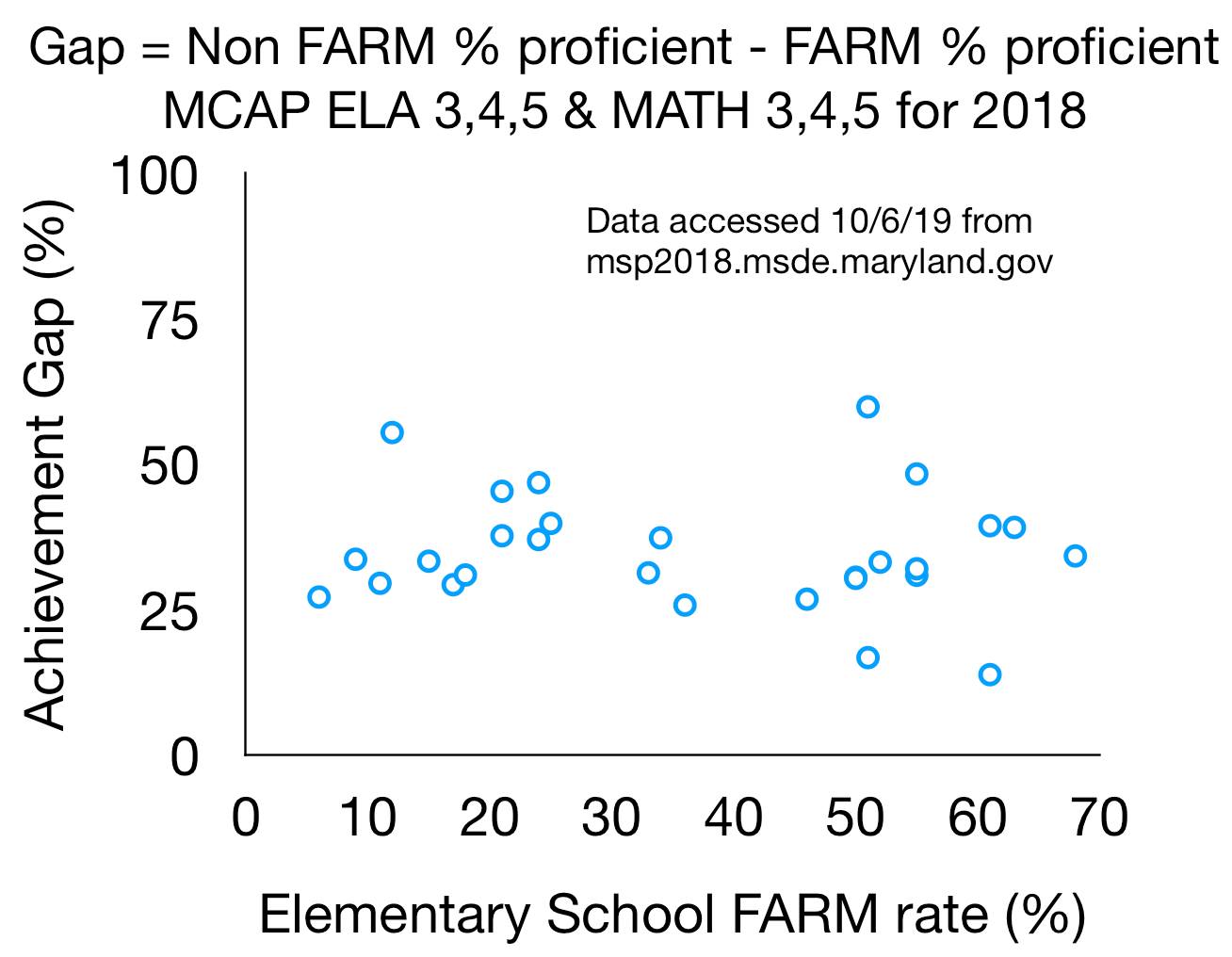 A spokesman for superintendent Michael Martirano, Brian Bassett, previously told the DCNF the superintendent has acknowledged that “simply reducing a school’s FARM percentage … will not automatically improve student outcomes.”

“The purpose of considering the socio-economic component was to increase equity,” Bassett said.

Chao Wu, the school board’s only immigrant member, wrote on his website Friday that he “met and talked to many community members. My notes filled 2 large notebooks. The key message from the community has been: Don’t move my kids. We love our community school. As elected BOE members, we are obligated to listen to our constituents.”

“We made a crisis by placing balancing FARM rate as the highest priority for this redistricting,” he wrote, calling it a tornado. “Under a tornado, everyone gets hurt,” he said.

Marybeth Steil, a county resident and lawyer, told the DCNF, “I thought I was a Democrat before the August 22 release of the plan, but this totally alienated me. Lots of my neighbors have told me the same. They awoke a bear for sure.”

County Executive Calvin Ball, a Democrat, has a “chauffeur and personal security,” while the school system is spending on more buses instead of educational programs, Steil said. “Ball sat in the audience of his church while the pastor talked about sending black children to ‘white schools’ — we do not have ‘white schools’ in this county since the student population is only 35.8% white. FARMs students is only 18.9% of the county,” she said. (RELATED: Activists Want To Abolish Your Kid’s Honors Classes, Cite ‘White Toxicity’ And ‘Supremacist’ Values Of High Achievement)

Steil said the county’s quest for equal results has led to it holding back high achievers. “They are not tracking kids in classrooms. They are ‘integrated’ so that kids who are above grade level have to help teach the kids who are not ahead and still in the same classroom. China is going to eat our lunch, as a nation, if we keep up this crap,” Steil said.

A constellation of affiliated national activist groups, many backed by George Soros and citing what an economist called “junk science,” are pushing “equity” plans nationally. Even as Howard County residents vowed to vote incumbents out of office, neighboring Montgomery County, Maryland, is embarking on similar moves.

“The redistricting plan based on ‘equity’ came out of left field and is clearly an idea which came from outside the county. Even the board members who were very much ‘for’ the plan cited how the ‘country was watching’ — which just goes to show they were more interested in their own headlines than the lives of our county’s school children,” Steil said.

“I do think we are a warning to Montgomery County. Our Asian and Indian populations are all a buzz about it,” she said.