A quarter of America’s nearly 200 embassies around the world have vacant ambassadorships, leaving foreign policy in the hands of career Foreign Service bureaucrats like Bill Taylor, a Daily Caller News Foundation analysis of State Department records found. That includes ambassadorships for countries as significant as Japan, Russia and Canada.

In some cases where ambassadorships aren’t vacant, the Trump administration nominated a career Foreign Service official to countries where Obama had a political ambassador, a DCNF review of data from the American Foreign Service Association found.

When a president has not nominated an ambassador, or the Senate has not confirmed a nominee, a career State Department official called the chargé d’affaires acts as the top position.

It is that situation that left Taylor, a career State Department official and former staffer for Democratic Sen. Bill Bradley, as the top American in Ukraine. Taylor said he accepted the job because he “didn’t trust” President Donald Trump and felt it was “critical” that after Marie Yovanovitch, the Obama holdover who preceded him, “was so badly treated that it was a senior person out there,” Buzzfeed reported, quoting other diplomats.

In half of the slots, career Foreign Service staff are serving as Senate-confirmed ambassadors — either nominated by Trump or held over from the Obama administration with his consent, the DCNF found.

That was the case with Yovanovitch, a career Foreign Service officer and Obama nominee who was sworn in as ambassador to Ukraine on Aug. 18, 2016, only months before Obama left office. She was not recalled until May 20, 2019, nearly two and a half years into the Trump administration, amidst allegations that she was undermining Trump. Yovanovitch defied instructions from the State Department not to testify before Congress Oct. 11.

“Reeker, a 25-year friend of Ms. Yovanovitch’s, tried to rally support for her in the form of an internal proactive statement, but was urged not to by top State Department officials, who noted that Ms. Yovanovitch’s removal was a priority for the president,” The Wall Street Journal reported, citing a person familiar with Reeker’s closed-door testimony to Congress in the impeachment inquiry.

The group of holdover career ambassadors includes the likes of Catherine Ebert-Gray, the ambassador to Papua New Guinea. When the Obama-nominated bureaucrat was sworn into office in 2016, she boasted of her politics. Wisconsin “is such a progressive state,” she said, citing “Midwest values.” She added: “You can take a girl out of Wisconsin but you can’t take the Wisconsin out of a girl.”

In September, Ebert-Gray signed a letter calling Trump’s criticism of Yovanovitch “shocking and inappropriate,” adding next to her signature: “The views expressed are my own and not necessarily those of the U.S. government.”

It is normal for presidents to place career State Department employees in countries that are complex or esoteric, which amount to some two-thirds of appointments.

In most of those cases, Trump nominated the career employees for ambassadorships and the Senate confirmed them, while in others, Obama had political ambassadors and then replaced them with career Foreign Service officers before leaving office.

“‘Personnel is policy’ is a cliche, but a true cliche. No administration can adequately advance its policy priorities unless they have people that believe in and strongly advocate for them,” Brett D. Schaefer, an expert in international appointments with the conservative Heritage Foundation, told the DCNF.

All presidents “want someone that’s aligned with them,” Schaefer said. “It’s easier for Democratic administrations to put career people in because [career State department employees] tend to share their outlook,” he continued.

George Nesterczuk, who served as associate director of the Reagan administration’s Office of Personnel Management, told the DCNF that “you’ll find no conservatives in the foreign service.”

Career Foreign Service ambassadors appointed during the Trump administration include the ambassador to Uzbekistan, Daniel Rosenblum, who previously worked for Democratic Sen. Carl Levin and a union group affiliated with the AFL-CIO, according to his official bio.

That group also includes the ambassador to Togo, Eric Stromayer, who began his career in the office of a Democratic senator, the DCNF review of ambassadors’ official bios showed. The Trump-nominated ambassador to the Democratic Republic of the Congo, Michael A. Hammer, served as special assistant to Obama and was nominated by Obama as ambassador to Chile in 2013.

The quarter of slots that are vacant — leaving career, unconfirmed Foreign Service officers in charge — include large allies like Canada, hotspots such as Pakistan, and controversial locales such as Qatar.

Countries where Obama had a political appointee, but where vacancies now leave career bureaucrats in charge, include the Bahamas, Belize, Canada, Japan, Malta, Morocco, Russia, Singapore, and Tanzania, a DCNF comparison to data on Obama appointments from the American Foreign Service Association found. In Belize, a former “environmental policy advocate” is chargé d’affaires.

Schaefer said Trump has been slow to nominate people because he “was an unconventional nominee for the presidency, and he didn’t have the built-in network that past presidents used to fill out their administrations. A lot of what he was relying on for landing teams were junior people.”

That has increased the power of career State Department bureaucrats, he said. When Trump has tapped political nominees, they were often slow-walked by a drawn-out Senate confirmation process and a snail-paced background check process, he added.

According to data from the Partnership for Public Service, there is no nominee for dozens of State Department positions. Even more positions have nominees who have not yet been confirmed. The State Department and White House did not return requests for comment.

In addition to ambassadors to countries, the U.S. also has representatives to important global organizations like the United Nations. (RELATED: Obama, Clinton Alumni Serve At UN, Continuing Liberal Influence Over International Affairs During Trump Era)

For example, the U.S. Permanent Representative to the U.N. Agencies in Rome, which involves the U.N.’s multi-billion dollar food programs, was only filled by Kip Tom, a conservative midwestern farmer, in May 2019, more than halfway through Trump’s term. Until then, Tom Duffy, a career Foreign Service officer, occupied the job in an acting capacity.

On LinkedIn, Duffy describes his achievements at the U.N. in terms of lobbying the U.S. to be favorable to the U.N.: “On my watch, my team and I communicated the significance of the [Rome-based agencies] to the U.S. Government and U.S. Congress such that U.S. funding continued (and – in the case of the World Food Programme (WFP) – increased) … [and] demonstrated continued U.S. engagement in multilateral affairs to a concerned and skeptical world.” 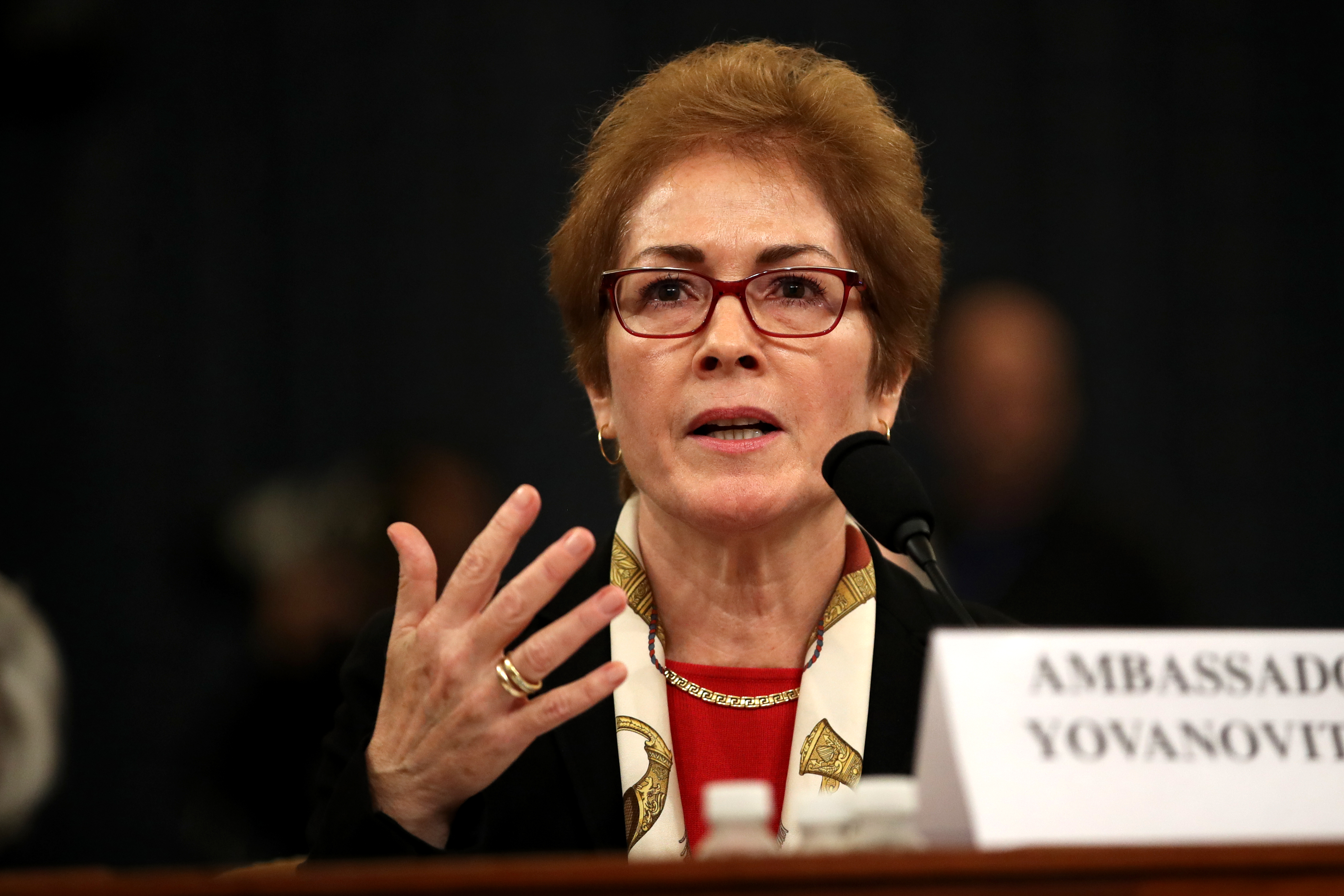 Other examples of non-country posts include:

Permanent Representative to the Organization for Economic Cooperation and Development (OECD): The position has been occupied by political appointees since 1993. Yet the position has been vacant — leaving a career charge d’affaires at the helm — since the 2017 departure of the third political appointee that Obama put in the slot. That was Daniel Yohannes, who made gay rights a centerpiece of his agenda at the economic group.

Permanent Representative to the United Nations and other international organizations in Geneva: The position was vacant since Pamela Hamamoto, a Democratic campaign fundraiser who childhood friend of Obama, resigned upon Trump’s inauguration.

Trump did not nominate anyone to fill the position for nearly two years. In September 2018 he tapped a Republican, Andrew Bremberg, who was confirmed over a year later, on Oct. 22.

Schaefer said that “it was terrible that it wasn’t filled for three years. You had a career person de facto in charge. You have no ambassador, so when you’re interacting with other missions and trying to convince them of the U.S. position, you’re doing it from an inferior position.”

Permanent Representative to the Association of Southeast Asian Nations: The position has been vacant since the January 2017 departure of Obama appointee Nina Hachigian, a former official of the Center for American Progress, a liberal think tank tied to Hillary Clinton’s former campaign chair. Trump said in March 2019 that he would nominate former GOP Rep. John Linder, who has not yet been confirmed by the Senate.

Permanent Representative to the Organization for Security and Co-operation in Europe (OSCE): In June 2019, Republican Jim Gilmore took the position, but for two and a half years, the slot — key to monitoring Russia — was vacant. That meant it fell to deputy Harry Kamian, who previously worked in the innermost office of John Kerry, former secretary of state under Obama.