I stepped down from the bird buggy marking our first stop on the South Georgia bobwhite quail plantation. I approached the side-mounted wood gun box and carefully removed an over/under from the padded brackets, exposed the breach and dropped in 20-gauge shells. We walked only a few yards when the pointer locked up. Our guide dispatched the hyper Boykin flusher into the understory. Shotgun at the ready, listening, watching, waiting, the pines and grasses aromatic of autumn conjuring a seductive beauty of the moment, when the covey exploded: bang, one shot, two birds down.

In an instant the Bettinsoli shotgun made its mark in the field, a reassuring premonition of what to expect from the family-owned Italian gunmaker returning its marque to the American market after an apparent 15-year hiatus. In reality, Bettinsoli hasn’t entirely been absent here: the company has manufactured private-label shotguns for other companies and organizations, including Ducks Unlimited. 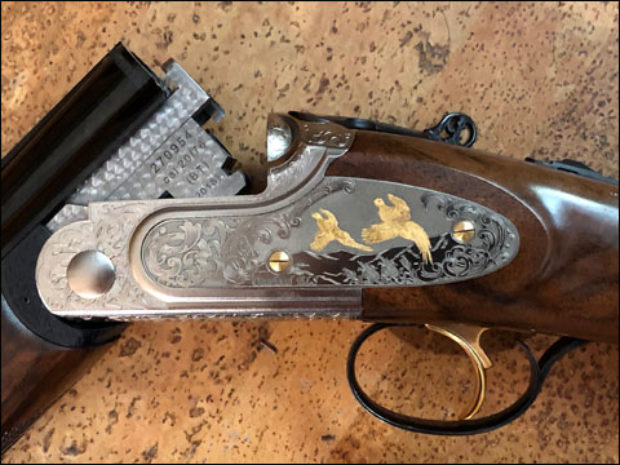 The 20-gauge Bettinsoli Overland ELS with some of the bobwhite quail taken at Southern Woods Plantation.
–

Now the guy bringing the Bettinsoli name back to America is entrepreneur Nick Stratman of Chandler, Indiana. He’s looking to replicate the success that Bettinsoli has achieved in the U.K. and other countries as a go-to mid-market over/under that hits the sweet spot of value, performance and aesthetics.

He started working with Bettinsoli some two years ago, officially launching Bettinsoli USA in March 2019, and in August began development of a national dealer network. In laying the groundwork, he opened a new warranty service center in nearby Milan, Indiana, that has a readily available stockpile of parts and a qualified gunsmith.

“Going to the gun shops and meeting likeminded individuals has been awesome,” he said.

Mr. Stratman has already recruited “a couple of retailers.” In the meantime, he’s happy to sell you a Bettinsoli via the Bettinsoli USA website at https://www.bettinsoliusa.com by shipping it to your nearby FFL.

Like their Italian partners, Bettinsoli USA is also a family operation. Mr. Stratman’s father had started a hometown chain of pharmacies that remained ongoing for 26 years. Mr. Stratman’s last position there was President. But eight years ago, the business was sold to CVS Pharmacy. Leveraging his MBA degree and business experience, Mr. Stratman subsequently worked in food sales and transportation. Father and son then became partners in Bettinsoli USA. 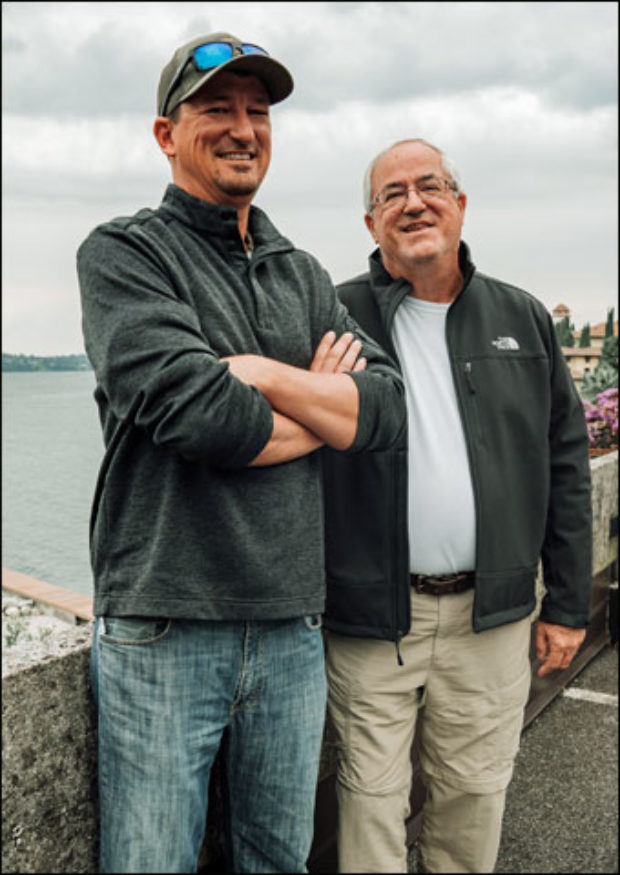 Nick Stratman with his father, John.
–

“I come from a family of avid outdoorsmen,” Mr. Stratman said. “I grew up hunting quail, turkey, dove, waterfowl, deer. Bettinsoli is the perfect marriage of the next chapter of my life to mix business with what I love to do.”

Mr. Stratman found Bettinsoli after hearing “they were a high-quality Italian shotgun manufacturer.”

An email was sent to the company asking if they were interested in coming to the U.S. under their own name. The response was affirmative. Last September, Mr. Stratman and his father visited Bettinsoli in the Italian gunmaking mecca of Brescia. 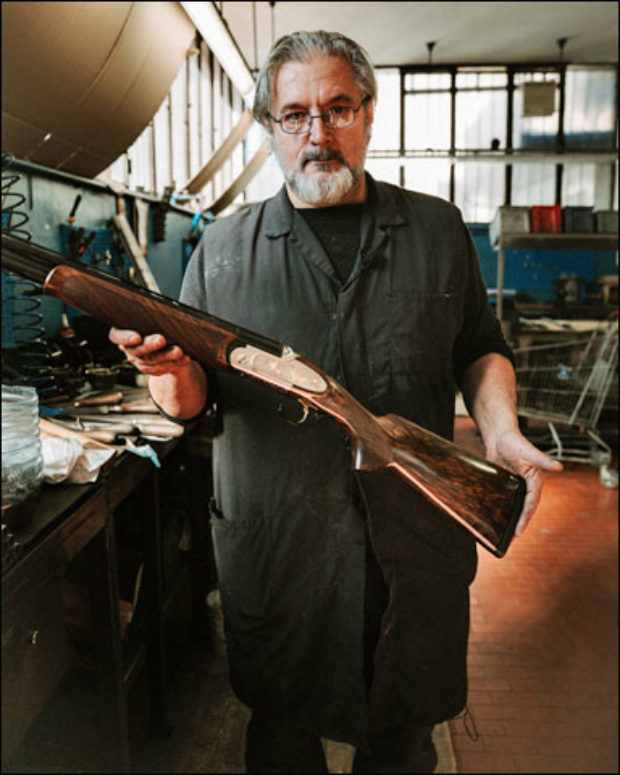 “The company was amazing,” he said. “They have a couple of factory locations for fit and finish and a state-of-the-art CNC factory for receivers and other parts. They use a high-end barrel company that uses the same materials and processes as some of the finest shotguns in the world. The Bettinsoli family was accommodating and hospitable and very excited about building their name in the U.S. under their own brand.”

The top-of-the-line Sporting Bettinsolis include the Overland ELS and Overland EELL. Both of the Overlands are also available in 12 gauge, 20 gauge, 28 gauge and .410. The 28 gauge and .410 feature scaled frames and all Overlandmodels are shipped with two butt plates, including a thinner one for winter. Overland prices vary between $3,799 and $3,999.

Mechanically, the Bettinsolis follow Brescia’s proven actions of underlug, bifurcated lumps and trunnions to secure the barrels, with a reinforcement bar along the floor of the receiver. A monobloc marries the over/under barrels. The integrated barrel selector and safety switch was quickly accessible on the top tang – handy for the manual safety. The mechanical trigger group relies on coil springs.

The sourced barrels of chromium molydenum steel are hammered, producing forcing cones called DualCon that gradually taper down the entire length intended to deliver superior shot patterns with the lowest felt recoil – as I would discover on the quail hunt.

Product differentiation in a defacto design arises from quality and aesthetics. After all, why pay more for one shotgun over another if they are pretty much the same. Bettinoli says their shotguns “represent the best compromise between the ancient tradition of gun makers in Gardone Val Trompia to the modern technology provided by CNC machinery.” 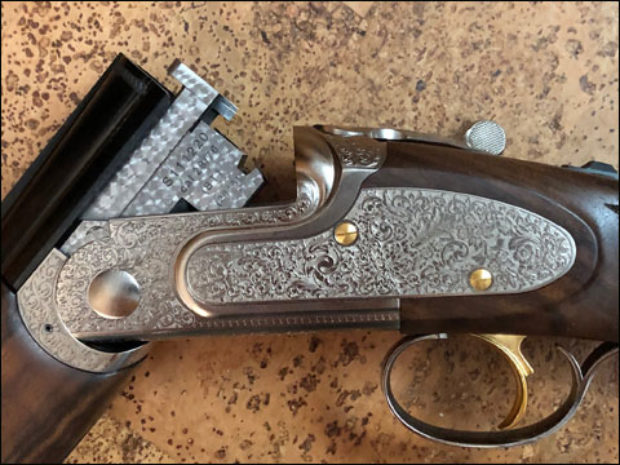 In particular, the fit and finish on the Bettinsolis I hunted with was impressive. Wood-to-metal seams were extremely tight.

The 20-gauge Overland ELS overshot in aesthetics with a wood butt plate and grip cap. On the brilliant sideplates, laser scroll engraving showed enough depth for a robust contrast with the gold birds and dog as well as the roses on the trigger guard. Gold-plated screws and trigger blade elevated its appearance. The pistol-grip and forend checkering was adequate on nicely marbled polished walnut of dark chocolate against honey. This particular shotgun came with 28-inch barrels and flush chokes.

Bettinsoli’s 28-gauge Overland featured a fine 100-percent scroll coverage against the bright sideplates on the scaled frame. The ornamentation matched the trigger guard and forend latch. There was the same gold trigger blade and the trigger guard’s gold roses. The matte-oil appearance and relaxed pistol grip with rounded knob endowed a classic aspect. If you’re a fan of 28-gauge over/unders with 30-inch barrels, this Bettinsoli would feel right at home in your hands. Like the 20 gauge, it shipped with a variety of flush chokes. 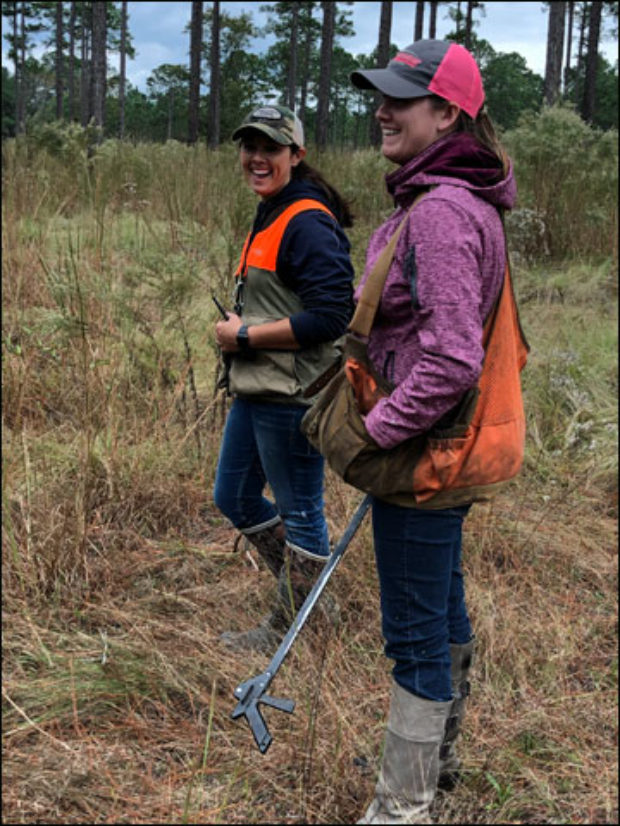 Our guide Hannah Jones (left) with her assistant Paula Tillman during our quail hunt at Southern Woods Plantation.
–

That initial quail double emphasized the shotgun’s fast mount, good fit, inherent balance, clear sight picture and smooth swing. The Bettinsoli had immediately won my confidence and I was ready to press on for the rest of our hunt at Southern Woods Plantation in Sylvester, Georgia.

My second bird was downed at about 35 yards over a retaining pond, and our guide Hannah Jones’ retriever made quick work of it. In the end, the 20-gauge Bettinsoli helped me harvest four quail before we moved to the next course where I switched to the 28-gauge Bettinsoli Overland.

As we trekked across our new location, I suspected the quail gods had turned against me. The 28-gauge Overland felt good with the few shots I was able to take, but it seemed like I was always on the wrong side of the flush or if a bird did fly my way it was too low or I was simply out of position for a clear shot. During my best efforts, the 28-gauge Overland shared the handling attributes of the 20-gauge Overland ELS and demonstrated an abundance of potential.

We returned to the Southern Woods lodge for a Southern whiskey tasting of bourbon and rye. And I started thinking, I need to give that 28 gauge a shot at redemption.