“This is a deeply insensitive and ignorant thing to say Nikki,” McCain said in a tweet. “There is no room for any defense of the confederate flag.” (RELATED: ‘You Feckless Unpatriotic Cowards!’: Meghan McCain Unloads On White House For Abandoning Kurds)

This is a deeply insensitive and ignorant thing to say Nikki. There is no room for any defense of the confederate flag. https://t.co/evVfyAeOmg

Update: McCain has now deleted her tweet. Here is a screenshot: 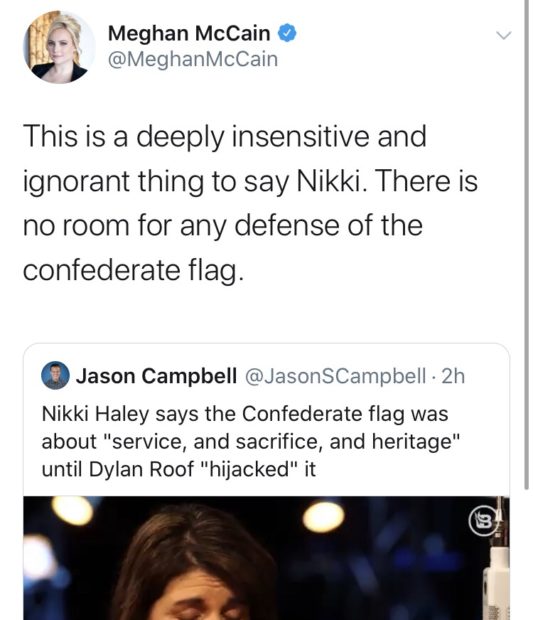 McCain’s comments came as a number of people criticized Haley on Friday after a clip from an interview she gave to The Blaze went viral on Twitter.

Nikki Haley says the Confederate flag was about “service, and sacrifice, and heritage” until Dylan Roof “hijacked” it pic.twitter.com/pqdhKIezRl

In the clip, Haley said that many South Carolinians view the Confederate flag as a symbol of “service” and “sacrifice.” She also appears to claim that racist mass shooter Dylann Roof “hijacked” the flag.

Haley was the governor of South Carolina during the 2015 shooting.

“And here is this guy that comes out with this manifesto, holding the Confederate flag, and had just hijacked everything that people thought of,” Haley said.

“We don’t have hateful people in South Carolina, there’s always the small minority that’s always gonna be there, but, you know, people saw it as service, and sacrifice, and heritage, but once he did that there was no way to overcome it, and the national media came in in droves.”

McCain often clashes with Trump supporters and those either formerly or currently in the president’s circle. Last month, she tweeted at Roger Stone, telling him to “rot in hell.”