Right after the invention of rifling, sight alignment is the most important advancement in man’s ability to fire an accurate shot.

Sight alignment and sight picture are two terms that are often used interchangeably and many times used as one and the same. It’s fine to put them together once they are both understood, but it is vital to know that they are two different and very distinct keys to hitting your target. Sight alignment has nothing to do with the target (well, besides hitting it) and I will be covering this relationship in the upcoming, The Fourth Habit of Highly Effective Shooters.

Watch Where You’re Pointing That Thing

For you to provide exceptional customer service, the shooter must aim the gun and give the round a definite direction of travel to the target. Accurate aiming with open sights is achieved by the shooter placing the front sight exactly in the middle of the rear sight with the top of the sight posts flush. You should see equal amounts of light on either side of the front sight post. With an aperture or peep sight, this is accomplished by putting the tip of the front sight post centered vertically, as well as horizontally, in the rear sight aperture. It then becomes imperative that the shooter maintains this relationship between the front and rear sights while depressing the trigger and discharging the gun. For more on how to accomplish this task, check out, You Want Me to Do What with My Finger? on ITS Tactical.

Sight alignment has to be worked out with any individual gun you shoot, but the basics remain the same. There are a lot of different types of sights out there, and it’s important to know how yours is meant to be used. Some owner’s manuals will even include pictures or descriptions on how they should be aligned. If you’re like me, you don’t read directions, but maybe you could take a peek when no one is looking – it could save you a lot of time and headaches on the range.

Houston, We Have A Problem

As with nearly everything in life, there are a few things that can go awry, but if you’re armed with the right knowledge, you’ll be better prepared to make self-corrections. The first is known as an Angular Shift Error. This occurs if the shooter fails to correctly align the sights as described above, and there will be little hope for hitting the target, except in rare cases where a round is accidentally “thrown” into the target. If the shooter is not aligning the sights with the same military precision required of Marine recruits folding their underwear, each time he shoots the front sight post will be in a slightly different relationship with the rear sight and it will look more like he’s shooting buck shot than a finely tuned instrument of destruction. 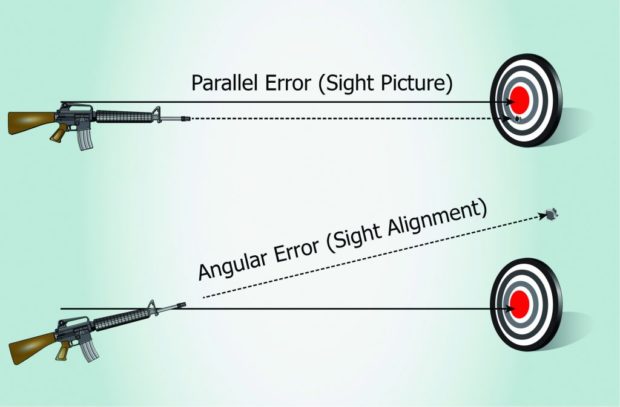 The other problem, which has more to do with sight picture, is a Parallel Shift Error. This is when the sights are aligned perfectly, but the gun is not aligned perfectly with the target. Basically what this means is that if you’re shooting at a target that is an eight-inch circle, you can move your gun around in an eight-inch circle, no matter how far away you are, and you’ll still hit the target in the same place your gun was in your imaginary circle on the firing line. If you’re focused on the target instead of the front sight, small movements (wobble) will appear magnified. This movement, though still there, will appear reduced significantly by focusing on your front sight.

The take-away for all this gun-fighting geometry is that your sight alignment (angular shift) is far more detrimental than sight picture (parallel shifts within the target size) to hitting your target. The majority of the shooter’s efforts should, therefore, be toward keeping the sights in correct alignment. So don’t worry about your wobble – holding the gun perfectly still is neither required nor is it possible without support.

I hope you learned something about the importance of sight alignment in being a Highly Effective Shooter. I actually didn’t know what I was going to say before I started, other than line up the sights and pull the trigger! Let me know if you have any questions, I missed something, or you have any sight alignment wisdom for the class.

This is a series of articles by SEAL instructor Chris Sajnog.

Chris Sajnog, a Master Training Specialist in the Navy, was hand-selected to write the US Navy SEAL Sniper Manual. He used this experience, plus four years of studying neuroscience and elite performance, to develop the New Rules of Marksmanship — a fundamental shift in learning how to shoot. He’s the author of two bestselling books, How to Shoot Like a Navy SEAL and Navy SEAL Shooting, and the owner of Center Mass Group, LLC a 100% Service-Disabled Veteran-Owned Small Business in San Diego, CA. Chief Sajnog, now offers his unique training online at https://chrissajnog.com.