Joseph Arroyo Joseph Arroyo is a writer, author, and Medicare Insurance specialist. He lives in Hilton Head Island, SC with his wife and two children.
December 06, 2019 8:44 AM ET
Font Size:

The Medicare Donut Hole refers to a gap in Medicare’s drug program. The gap leaves a hole in your coverage, hence the name. Medicare Part D is designed to reduce the cost of medications for those on Medicare. For some, though, the donut hole is a painful financial blow.

While the Medicare Donut Hole has been closed, a prescription drug coverage gap can still leave a sour taste in your mouth. This gap in your coverage can also hit your wallet hard. In this article, we will discuss:

Original Medicare, Parts A and B, do not cover prescription drugs. As the cost of medications rose over time, people struggled to afford their prescriptions. In response to these pressures, Congress and the President created Part D of Medicare.

Beginning in 2006, Part D offers Medicare enrollees a choice for drug coverage. All enrollees can get coverage from:

Both are issued by private insurance companies. To join, you must be eligible for Medicare. Anyone who is either entitled to Part A, or actively enrolled in Part B, may enroll in a Part D Drug plan. You must be enrolled in both Part A and B to enroll in Medicare Advantage.

MAPD and Prescription Drug plans have a formal list of all the drugs they will cover. This list is known as a formulary. plans are not required to cover every drug available. Instead, they must cover at least two drugs in every therapeutic category.

Therapeutic categories are groups of medicines that treat specific conditions. For instance, blood pressure drugs are in one category, and thyroid medicines are in another. Every plan must offer at least two drug choices in each category. Often many more than two are available.

Within the formulary, medications are grouped into tiers based on cost:

You pay a co-pay or co-insurance at each Tier. Where Part D gets tricky, though, is the fact that pricing changes during the year. Your costs are based on how much the plan has already paid for your medications during the calendar year. These changes in pricing are known as coverage stages.

What Are the Coverage Stages of Medicare Drug Plans?

Throughout the calendar year you may pass into and through four coverage stages in your drug plan: 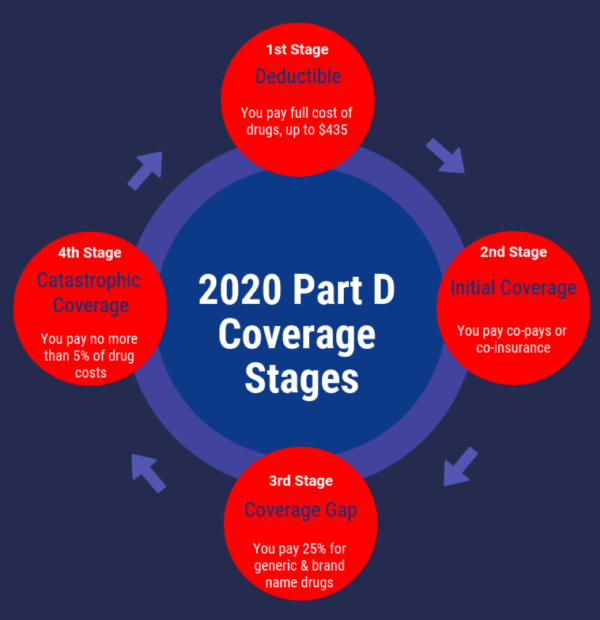 If you end up in the coverage gap, it’s important to remember a few facts. In the donut hole stage, 95% of the full price of brand name drugs counts towards your out of pocket amount. Even though you only pay 25% of the cost. Your drug plan pays 5% of your drug cost.

There are no manufacturer discounts on generic medications. Instead, Medicare now pays 75% of the cost for generic drugs; your 25% co-insurance makes up the difference.

You pay less in 2020 than in years past. The donut hole was more punitive in years prior to 2019. Back then you might have paid 44% of name brand drug cost – and the drug company discount was only 50%.

Does The Donut Hole Apply To Everyone On Medicare?

Also, Beneficiaries who are on Medicaid, or qualify for a program called Extra Help, available to those with low incomes and few assets, will not enter the Part D donut hole.

Use Part D To Save On Prescription Drugs

Even with the possibility of hitting the donut hole, Part D will save you money on drug costs. This is especially true if you have a higher income, and are not eligible for Extra Help from your State.

Every Medicare enrollee must have drug coverage; Part D Prescription Drug plans, and Medicare Advantage plans with a drug benefit, meet this requirement. Your enrollment window for Part D is just like for Original Medicare. You can enroll:

If you don’t signup during this seven month window, you’ll pay a penalty when you do enroll. The penalty increases for each month that you fail to enroll. To avoid the penalty, make sure you signup when you first become eligible.

It pays to compare plans to see which one offers the best mix of premium cost and expected yearly drug expense. Since benefits change each year, it’s a good idea to connect with a professional to review the plan options in your area.