Just before 1 a.m. EST, presidential hopeful and professional new age kooster Marianne Williamson invented a pardon that has not occurred — that of famed serial killer Charles Manson, a face that could give you nightmares, if he was still breathing.

But yes, there would be something sinister about such an act, if it was true. Williamson fell for a satirical story posted on Daily Kos.

Come on Marianne, it’s clear you want to stick pins in a President Trump voodoo doll and get him out of the White House, but Roger Stone, who is still alive, might snag a pardon before Manson.

Was she confusing Manson for Paul Man-afort? Is she operating in a past life? 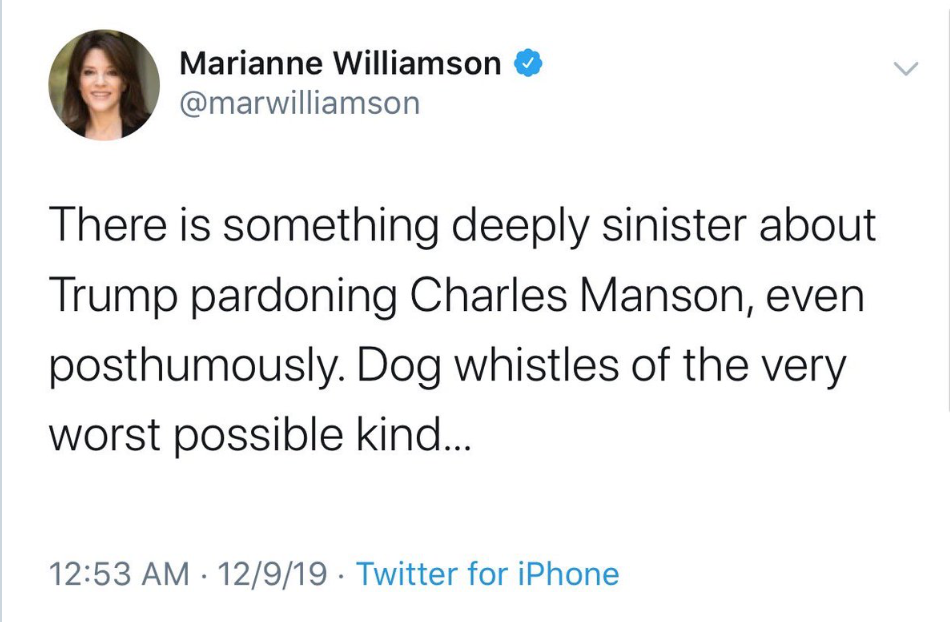 Some 16 minutes later, Twitter’s Mayor, Yashar Ali went after her.

“This never happened,” Ali, a reporter for HuffPost and New York Mag, wrote. “Williamson just tweeted this. This is a woman who gets furious when she’s told that she’s unserious and not prepared to run.”

When a follower questioned her — “What?????” — Williamson doubled down.

Williamson has raised other eyebrows in the past 24 hours by raising the hotbed issue of vaccines.

“Vaccines save lives absolutely. But asking for an independent commission to review vaccine safety is not ‘anti-vaxx,’ she tweeted. “It’s ‘safe-vaxx,’ which is totally understandable given over $4B paid in vaccine injury claims. Why are so many people so invested in protecting Big Pharma? Odd.”

Rick Wilson, a GOP pundit remarked, “A reminder that the Democratic party still has a goddamn woowoo fortune teller in the race.”

Adam Parkomenko, a Democratic strategist and former Hillary Clinton adviser, added, “Welp, I guess the folks on the other side of the aisle haven’t monopolized stupid.”

She lashed back, writing, “Read my issues page and tell me I’m a woo woo fortuneteller, Rick.”

In 1971, Manson was convicted of a first degree murder and included conspiring to off seven people. He was sentenced to death but ultimate got life in prison since California voters shot down the death penalty. Like Greta Van Susteren, the journalist, he said he was a Scientologist, but eventually declared it “too crazy.” Not surprisingly, biography.com reports that family members noticed “violent tendencies in his youth.”

No doubt, Manson might have really appreciated the pardon. But he died of complications associated with colon cancer in 2017. He was 83.

Williamson has since deleted the Manson tweet and her apology on the matter.