A pro-abortion Texas group posted a photo in December of its holiday party favors: candles that say, “Abortions are magical.”

The Texas Equal Access (TEA) Fund operates out of Dallas and provides funding to single mothers, survivors of domestic violence, homeless women and low-income women who wish to abort their unborn babies. “We have helped girls as young as 11 and women as old as 44,” the group says on its Facebook page.

“Getting our holiday party favors ready!” the TEA Fund wrote on Facebook Dec. 4. “Every year we honor our volunteers and make sure they get a token of appreciation at our annual holiday party.”

The photo shows four candles with unicorns on them and block letters that spell out, “Abortions Are Magical.” (RELATED: Planned Parenthood Employee Testified She Wanted To ‘Move Forward’ On Selling Fetal Livers For $750 Each) 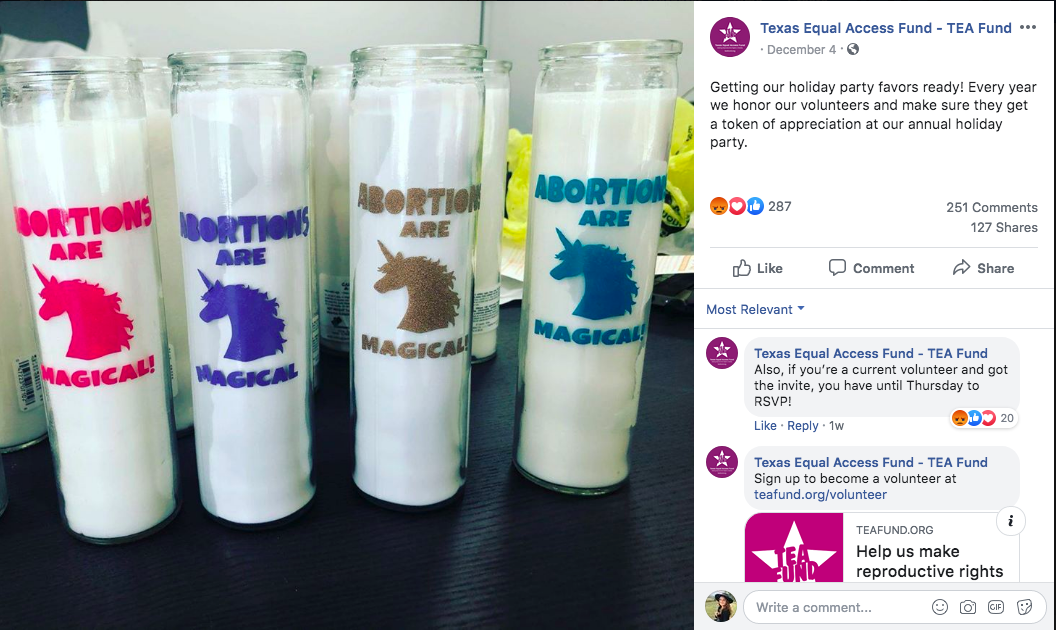 The group said in a separate Facebook post that “abortions are an option for people who don’t want to be pregnant, plain and simple.”

“Access to abortion care allows people to decide when to start a family,” the TEA Fund wrote on Dec. 5. “They provide new beginnings for people trying to create a future for themselves that may have been unimaginable without their abortion. Abortions help people prioritize their own physical and mental health.” (RELATED: Abortion Doctor Who Hoarded Fetuses Faulted WWII Bombings For His ‘Perception’ Of Humanity, Filmmaker Says) 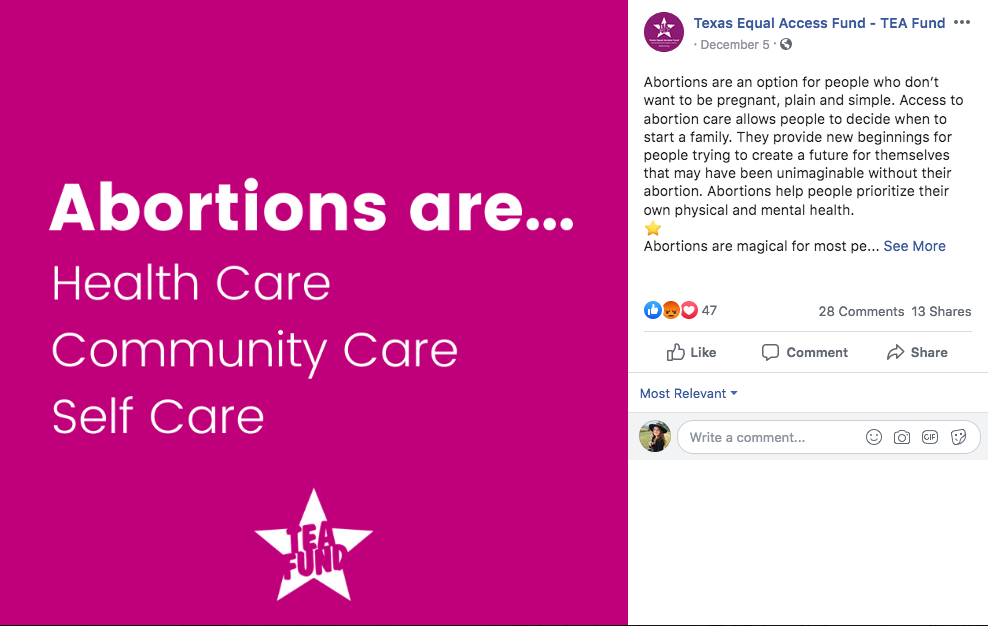 “Abortions are magical for most people who have them and refuting that just increases stigma around abortion,” the group added in the post. “They are health care, self care, and community care. We are proud to help people access abortion care and support them through the process. Regardless of age, race, gender, extenuating circumstance, income, sexuality, or ability, if it is their decision, we support them.”

Live Action Founder and President Lila Rose spoke out against the post, telling the Daily Caller News Foundation that abortion is not magical – it is murder.

“Abortion is the violent destruction of a defenseless human child by ripping apart, poisoning, or suctioning them to death,” Rose told the DCNF. “Abortion is not ‘magical,’ abortion is murder.”

March for Life President Jeanne Mancini also responded to the post by inviting the TEA Fund to attend the 2020 March for Life.

“I’d like to extend an invitation to Texas Equal Access to the 2020 March for Life where they will hear about and experience the beauty of life and how being pro-life is pro-woman,” Mancini told the DCNF. “This group might especially benefit from the testimonies of women and men who regret having been involved in abortion and would do anything to turn back the clock and undo what they consider to be one of the most significant decisions of their lives.”

Susan B. Anthony List President Marjorie Dannenfelser said the post is a “desperate attempt to normalize” and trivialize abortion. And Dannenfelser adds that this isi a “huge mistake.”

“Abortion is not magical – it is violence against innocent unborn children and their mothers and should be mourned, not celebrated,” Dannenfelser told the DCNF. “The overwhelming majority of Americans reject abortion extremism and this message will backfire.”

The TEA Fund did not immediately respond to the DCNF’s request for comment.