“Case Agent 1” wore many hats during the Trump-Russia investigation.

The veteran FBI counterintelligence investigator was a handler for Stefan Halper, a Cambridge academic who met covertly with three Trump campaign advisers 2016. Case Agent 1 opened the case file, known as an Electronic Communication, on Trump campaign adviser Carter Page in August 2016. He was also the main driver at the FBI for surveillance warrants on Page, and he was put in charge of verifying each strand of evidence included in the documents. He interviewed Page, a former Naval officer, five times in March 2017, and also met in January 2017 with Christopher Steele’s main source for information in the infamous Trump dossier.

Case Agent 1 is also one of the main villains in the Justice Department inspector general’s (IG) report on the FBI’s handling of the Trump-Russia probe, known as Crossfire Hurricane.

“Case Agent 1 was primarily responsible for some of the most significant errors and omissions in the FISA applications,” Michael Horowitz, the inspector general, said in a scathing report laying out a series of missteps in the FBI’s handling of Foreign Intelligence Surveillance Act (FISA) applications against Page.

Case Agent 1’s misdeeds are scattered throughout the inspector general’s (IG) 476-page report. That’s in part because the agent, who is not identified by name, was involved in several aspects of Crossfire Hurricane: opening the case file on Carter Page, handling Halper, filing FISA paperwork, and conducting interviews with investigative targets and witnesses.

The report identifies six areas where the agent withheld information that contradicted the FBI’s working theory that Page was an agent of Russia. According to the report, Case Agent 1 withheld exculpatory statements that Page and another Trump campaign aide, George Papadopoulos, made to Halper. The agent also withheld information from Justice Department attorneys about Page’s longstanding relationship with the CIA.

The agent, who was one of the first FBI agents to join Crossfire Hurricane after it opened on July 31, 2016, also withheld information that raised questions about the credibility and reliability of Steele and the veracity of his dossier, which alleged a “well-developed conspiracy of cooperation” between the Trump campaign and Russian government.(RELATED: DOJ Watchdog Puts Final Nail In Steele Dossier’s Coffin)

The IG report says that on Aug. 11, 2016, the agent met with Halper, whom he had handled as an informant since 2011. On Aug. 15, 2016, the agent raised the idea with others at the FBI of applying for a FISA order on Page. He wrote in an email cited in the IG report that there was a “pretty solid basis” to believe that Page was working as an agent of Russia. The suspicion was based on Page’s past business dealings in Russia, a that Page made to Moscow in early July 2016, and his known interactions years earlier with a Russian intelligence officer. FBI lawyers rejected the request to apply for a FISA, saying that there was not probable to believe Page was a Russian agent. 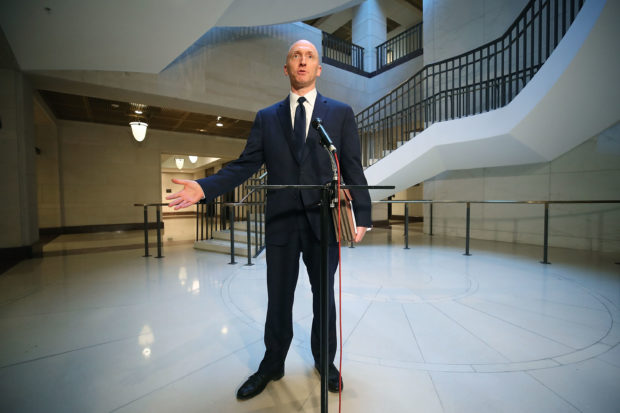 Carter Page, former foreign policy adviser for the Trump campaign, speaks to the media after testifying before the House Intelligence Committee on November 2, 2017 in Washington, DC.  (Mark Wilson/Getty Images)

The FBI assessment changed on Sept. 19, 2016, when six memos from Steele found their way to the bureau’s Crossfire Hurricane team. The IG report says that the dossier played a “central and essential” role in resurrecting the FBI push to wiretap Page.

Case Agent 1 was in charge of checking FBI databases for information on Page. As part of the FISA process, the agent was responsible for compiling the Woods File, which serves as a sub-file for documentation that supports factual claims made in FISA applications.

Horowitz found the Woods File for the Page FISA applications riddled with errors and omissions.

It is unclear why Case Agent 1 committed so many errors. Horowitz said that IG investigators found no specific evidence that the agent’s “pattern of errors” were intentional. But “we also did not find his explanations for so many significant and repeated failures to be satisfactory,” the report said.

Horowitz told the Senate Judiciary Committee on Wednesday that he believes the agent still works at the FBI.

The FBI did not comment on specific questions about the agent, but a spokeswoman told The Daily Caller News Foundation that the bureau “fully cooperated with the IG’s review and accepts all of its findings.”

“The FBI will hold employees accountable for potential misconduct or performance issues. The FBI will take disciplinary action where warranted.”

Whatever Case Agent 1’s motivations, the IG report shows he was eager to obtain the initial FISA against Page.

According to the report, the agent told investigators with the IG that he hoped electronic surveillance against Page would yield information in his emails about the Trump aide’s possible role in helping the Trump campaign quash a proposed amendment. He also said he “hoped that emails” would provide an explanation about what Page was doing in Moscow in July 2016.

At one point, the agent because so frustrated with delays in obtaining the warrant that he pressed Peter Strzok, the deputy chief of counterintelligence who led Crossfire Hurricane, to speed up the process.

“Case Agent 1 told us that he became frustrated with the pace of the FISA application process and asked Strzok to do whatever he could to help move it along,” the report says.

Perhaps the most egregious omission that Horowitz attributes to Case Agent 1 involves information that one of Steele’s main dossier sources provided agents during interviews in January 2017, shortly after BuzzFeed News published the dossier.

According to the IG report, the FBI tracked down and interviewed the source, who is identified in the report only as “Primary Sub-Source.” Case Agent 1 interviewed the individual along with other FBI agents and Justice Department attorneys.

The source’s statements dealt a significant blow to the dossier’s credibility, but were never divulged to FISA Court judges.

The source said that the dossier’s most salacious claim — that the Kremlin had blackmail video of Donald Trump at the Ritz-Carlton in Moscow in 2013 — was based on “rumor and speculation.” Though Steele’s dossier said that a source had verified the Trump story with Ritz-Carlton staff, the source told the FBI that they had not confirmed the allegation.

The source also showed the FBI text messages which undercut one of the dossier’s most serious allegations against Page: that he discussed a bribe with Igor Sechin, the president of Russian oil giant Rosneft and a Kremlin insider, during a meeting in Moscow in July 2016.

The dossier alleged that Page and Sechin discussed a possible brokerage stake in the sale of Rosneft if he could sway a future Trump administration regarding U.S. sanctions against Russia. Page has denied ever meeting Sechin, and the IG report said the FBI did not have evidence to contradict that. The Steele source showed the FBI a text message from one of their sub-sources regarding Sechin and Page that was the basis for the claims in the dossier. According to the IG report, the text message made no mention of a bribe.

Case Agent 1 did not include any of the information in the Page FISA application, or the Woods File, according to Horowitz.

Stuart Evans, who served as deputy assistant attorney general in the DOJ’s national security division, told the IG that department lawyers might have reevaluated whether to continue surveillance against Page if they had known the information about Steele’s source.

Regarding the comments from Steele’s source, the agent told the IG that it “did not occur” to him that they contradicted the dossier.

The agent received other information that called the credibility of Steele’s information into question. It, too, was not disclosed in the FISA materials.

According to the report, the agent received information prior to submitting the initial FISA application on Oct. 21, 2016, that Steele told an FBI team in early October 2016 that a sub-source for his primary source was a “boaster” and “embellisher.”

The sub-source, identified as Person 1 in the IG report, was believed to be the source for numerous allegations in the dossier, including about Page.

The agent reviewed the information prior to the submission of the FISA application, but left it out.

The statements were “inconsistent” with Steele’s allegations in his dossier of conspiracy between the Trump campaign and Russia, according to the IG report.

Page denied in a meeting with Halper on Aug. 20, 2016 that he had ever met Trump campaign chairman Paul Manafort, or that he had ever heard of a Kremlin insider named Igor Diveykin. He also denied playing any role in the Trump campaign’s work at the Republican National Convention to table an amendment to the party’s platform regarding military aid to Ukraine. News reports at the time suggested that Page might have been involved in the issue, but he denied it to Halper.

Case Agent 1 told the IG that he “may have overlooked” Page’s comments to Halper, and in hindsight should have included them as exculpatory information in the FISA package.

The agent said that an “oversight” on his part led him not to include Papadopoulos’s statements to Halper in the Page FISA materials.

Papadopoulos denied in a Sept. 15, 2016 meeting with Halper in London that the Trump campaign was working with Russian to steal and release Democrats’ emails.

The IG also said that the agent “did not fully or accurately describe” the information about Page’s past relationship with the CIA. 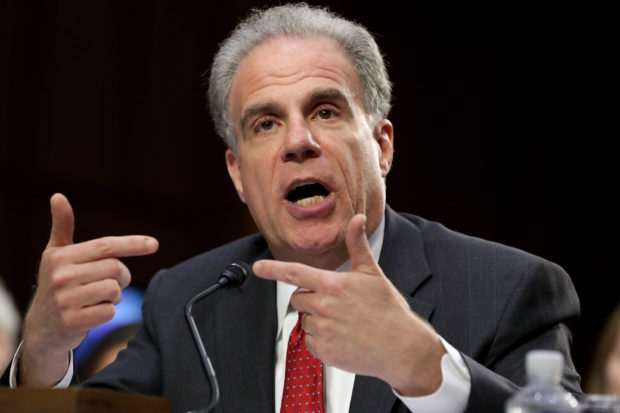 The agent deemed information from the CIA about a past relationship with Page to be “out of scope.” He said that Page had a relationship with the spy agency when he lived in Moscow until 2007. The IG said the agent’s claim was “inaccurate,” and that the CIA had told the FBI on Aug. 17, 2016 that Page was an “operational contact” for the CIA.

According to the report, when an attorney with the Office of Intelligence “explicitly” asked the agent in late September 2016 about information regarding Page’s prior relationship with the CIA, the agent “did not accurately describe the nature and extent of the information the FBI received” from the CIA.

An attorney in the Office of Intelligence said he would likely have included the information in the FISA application.

Case Agent 1’s final omission involved information that Justice Department Bruce Ohr shared regarding Steele in September 2016. Ohr, who met with Steele multiple times before and after the 2016 election, told FBI agents that the ex-spy was “desperate” that Donald Trump lose the election. Ohr’s statement made its way to the FBI team investigating Page, but Case Agent 1 did not include the information in the Page FISA warrant.

Republicans have long complained that the FBI failed to disclose that Steele harbored a personal bias against Trump that could have colored the information he gave the bureau.