I disagree that the average .223/5.56 cartridge, with its 55-grain bullet, is ideal as a deer and wild-hog round. I understand its allure—that the modern sporting rifles (AR-15s) in which this cartridge is most often chambered are hip, inexpensive, accurate and easily suppressed—but I believe there are better calibers for tough hogs and big game. One of them is the .450 Bushmaster. Ruger now chambers it in its AR-556 MPR rifle so you can have all of the benefits and fun of an AR while gaining twice as much umph downrange.

By now I feel sure most readers are familiar with AR-style rifles. Ruger was late to the show, but finally entered the market in 2009 with a high-end model called the SR-556. However, in 2014 it released a low-priced, made-in-America line of ARs called the AR-556 and soon afterward the AR-556 MPR. While most of these are chambered in 5.56 NATO, Ruger also made a model in .450 Bushmaster.

To accommodate the long, straight-walled cartridge with a .452-caliber, 250- to 300-grain slug, a few parts had to be modified. For starters, the bolt and lockup system had to be made more robustly to handle nearly six times the recoil of a 5.56 round. The resulting bolt is made from a super-alloy and features tapered lugs to accommodate the thick head of the rebated-rim case. And while the steel magazine looks similar to a .223/AR-pattern mag, it holds five rounds and will not work in an AR-15 rifle and vice-versa.

Lastly, the cold hammer-forged, 4140 chrome-moly, 18.6-inch-long barrel features 5R rifling with a slow 1:16 twist rate to stabilize the short, heavy, .45-caliber bullets. It terminates in a radial ported muzzle brake that’s the same diameter as the barrel to ease the kick of this load. But everything else about the rifle is much the same as the ARs we are familiar with.

The direct gas-impingement gun functions via a carbine-length gas tube that’s ideal for this rifle’s mid-sized length. It is hidden by a machined-aluminum, 15-inch handguard that features M-LOK attachment slots and a Picatinny rail along its full length. The rifle wears a Magpul grip and six-position telescoping Magpul polymer stock, capped by a firm rubber buttpad. Finally, it features Ruger’s two-stage Elite 452 trigger. More on that later.

I have sped through most of the features of this rifle because the real story is the caliber in which it is chambered, the .450 Bushmaster, which turns an ordinary AR-15 into a modern-day hog killer. 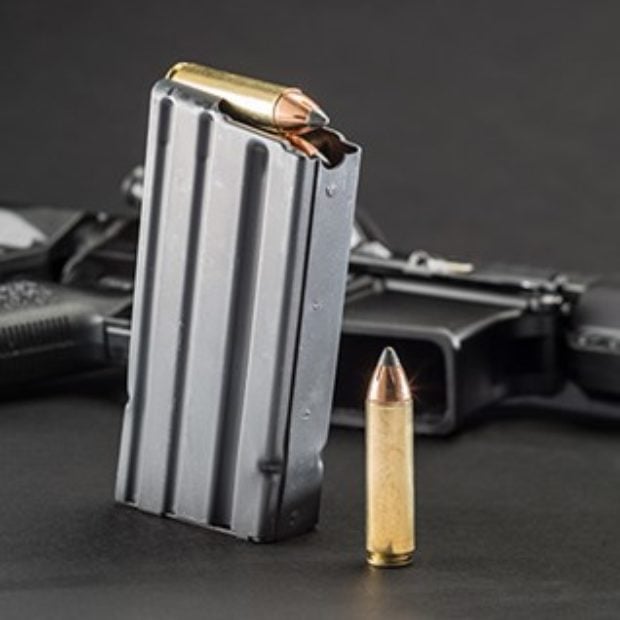 The .450 Bushmaster was developed by a man named Tim LeGendre, who took the versatile .284 Winchester Mag. case and ultimately cut off the tapered neck and shorted it to 1.7 inches. He built it using stubby, .45-caliber bullets that were commonly used in .45-70 cartridges so the overall cartridge length would measure the same as 5.56 rounds and therefore fit in the actions of standard AR-15s. Using 250-grain bullets, the round can attain velocities of 2200 fps, producing muzzle energies of 2,700 ft.-lbs. A 300-grain Federal Power-Shok load generates a muzzle velocity of 1900 fps with a muzzle energy of 2,405 ft.-lbs. This is twice the energy of a standard .223. In terms of trajectory, this 300-grain, low-BC bullet drops 13 inches at 200 yards if zeroed at 100 yards. (The higher-BC, 250-grain Hornady load drops 9.3 inches where it produces 1,226 ft.-lbs. of energy.)

In real-world terms, any load makes this semi-auto rifle a viable gun for medium-sized game out to 250 yards, and a bit farther if you wish to push it. But its strength is at close range—100 yards and in—where quick shots on hogs are needed for land managers who wish to take as many as possible at each opportunity.

As a neat incentive for some hunters, the caliber conforms to certain states’ laws pertaining to legal rounds for shotgun seasons. Due to its straight-walled case and bullet diameter greater than .35 caliber, it can now be used in some jurisdictions in Michigan, for example, and other places. Certainly it performs better than a shotgun slug in terms of accuracy.

The Ruger in .450 Bushmaster can also be easily suppressed via its 11/16-24 threaded muzzle. While I don’t advocate using subsonic rounds for game (there’s really no point because hogs can still hear subsonic rounds), the .450 is much better suited for doing so thanks to the bullet’s mass that produces killing energy when the velocity is capped at subsonic speeds. The platform is also perfectly suited for night vision or thermal optics thanks to its long Picatinny rail.

After testing the rifle extensively, here’s what I found: It is adequately accurate (see table) and perfectly suited for hunting wild pigs at night as they congregate over crops or bait. I mounted an Accufire Noctis night-vision optic on the rifle as well as a flashlight to take full advantage of the nocturnal feeding habits of the hogs. I like that the gun’s stock is adjustable, not so much for length of pull, but for riding around in a truck and while transporting.

It should be known that the lithe, 7.4-pound rifle in .450 Bushmaster delivers decent recoil, academically on par with a 7mm Mag. at around 22 ft.-lbs. However, in real-world terms it recoils less than that thanks to the significant weight gained by adding a loaded magazine and whatever optic you choose. But it could have been mitigated further had Ruger chosen to put an effective recoil pad on it. I understand they didn’t want to ruin the gun’s tactical, slick look, but the thin, hard buttpad it wears doesn’t do much. Still, recoil isn’t awful, but it isn’t an AR-15 either. Just don’t creep up on the scope and you’ll be fine.

The rifle was accurate enough, but not as accurate as many of the .223 ARs I’ve shot. But that’s okay considering it’s not for long range. Certainly, it is helped by a decent “two-stage” trigger, Ruger’s “Elite 452.” By “two-stage” the company means there is about a quarter inch of takeup before the trigger breaks at a measured 4 pounds, 11 ounces. It was consistent and great, especially for a low-priced AR.

On hogs, the .450 is a killer provided ranges are kept inside 300 yards and shot placement is ideal. Past 100 yards, I recommend aiming behind the shoulder for the lungs rather than going through both shoulders like you can with modern, high-powered bolt guns.

I had no function issues, and the Ruger was just plain fun to shoot. Really, it’s only negative is ammo is not super-easy to find and is fairly expensive at around $32 per box of 20. But if you wish to plink, go back to the wimpy .223 and save the .450 Bushmaster for game time, because this big dog’s for huntin’!