The new poll, released Tuesday, surveyed 900 likely voters in the 30 congressional districts that President Donald Trump won in 2016 but are currently occupied by Democrats.

According to the survey, voters in those districts oppose impeachment by 10 percentage points, 53-43, and would support a new candidate over the Democratic incumbent by 11 points, 47-36.

A plurality of voters, 38%, said that if their congressperson supported impeachment, it would make them less likely to re-elect that individual. Just 29% said supporting impeachment would make them more likely to vote for the incumbent. (RELATED: Trump Supporters Erupt At Democratic Rep. Slotkin Town Hall After Coming Out In Favor Of Impeachment) 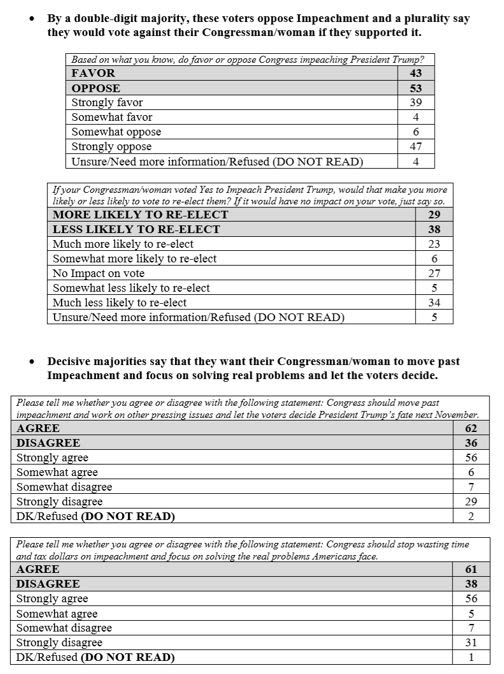 “These Democrats already knew they were in trouble before the sham impeachment, but now they are in serious jeopardy,” Trump campaign manager Brad Parscale said in a statement.  “By moving forward with her political theater of impeachment, Nancy Pelosi has accomplished two things: she has energized the President’s supporters and walked her entire majority caucus off the plank.”

Conservative groups have recently targeted these Democratic congresspersons as the “Dirty 30” and have warned them that voting for impeachment could cost them their seats. New Jersey Rep. Jeff Van Drew was reportedly considering switching his party affiliation to Republican earlier this week because of the tricky politics in his district, causing his staffers to resign en masse.