The “Tucker Carlson Tonight” segment cited a report from the Campaign for Accountability purportedly showing how Koch-funded “conservative organizations in D.C.” like the Heritage Foundation, the American Conservative Union, the American Legislative Exchange Council, and others “have colluded with Big Tech to shield left-wing monopolies from any oversight at all.”

While acknowledging the “nice and very well-meaning people” who work at Heritage as well as the fact that he once worked there himself, Carlson contended that the organization currently “no longer represents the interest of conservatives, at least on the question of tech.”

In a Daily Signal piece titled, “Tucker Carlson’s False and Misleading Claims About The Heritage Foundation,” Rob Bluey, Heritage’s vice president of communications and the site’s executive editor, contended that the organization does not “deviate” from its core principles of “free enterprise, limited government, individual freedom, traditional values, and a strong national defense.”

“It was, therefore, incredibly disappointing to hear Tucker Carlson, whom we hold in high regard, mislead his viewers about Heritage’s work on the topics of big tech and censorship,” Bluey wrote.

Unfortunately, Carlson did not contact Heritage in advance of his segment or provide Heritage with an opportunity to respond to his accusations. Rather than engage in a substantive policy debate, he chose instead to make ad hominem attacks and question our integrity. We are disappointed this came from someone whom we admire and respect.

Bluey called Carlson’s contention that a Heritage report repeated trade association lines verbatim “false,” arguing that the report was “property quoted and attributed to sources” and “went through a thorough and lengthy process of vetting and review by Heritage scholars to ensure accuracy and agreement among all Heritage analysts involved in technology and social media policy.”  (RELATED: ‘This Is Not The Capitalism That I Signed Up For’ — Tucker Carlson And Steve Hilton Discuss Busting Big Tech’s Monopoly)

He then defended its conclusions as being “based on the principles that guide all of our policy recommendations” before calling Carlson’s contention “an unfounded assertion against Heritage and outrageous smear of one of our scholars.”

Regarding the foundation’s stance on government’s role in regulating big tech, Bluey wrote: “It should come as no surprise that Heritage supports empowering consumers rather than government. We are, and have always been, champions of the free market and critics of government intervention. That’s why we are forcefully pushing back on the few outspoken individuals who seem to prefer an expedient answer rather than a principled solution.” 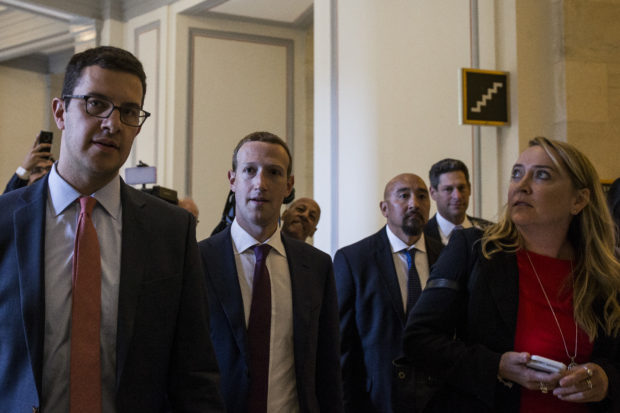 Bluey did insist, however, that Heritage does push back against big tech censorship, citing several examples in the piece.

“On our public platforms and in a private meeting with YouTube’s CEO, we made our position abundantly clear: We will not tolerate this type of censorship and will stand side by side with other conservatives experiencing similar challenges,” he wrote.

Referring to donations from the Koch brothers and others, Bluey told the Daily Caller: “For the record, total corporate support amounts to less than 2% of Heritage contributions. And I can assure you it has no bearing on our policy positions.”

When asked about the notion of conservatives being able to simply “build” their own version of Google in response to censorship, Bluey told the DC that his organization “has done far more than say ‘build your own platform.'”

We have publicly and privately engaged with these companies, we’ve called them out when appropriate, and have provided intellectual firepower (like our detailed report) to the conversation. Our policy recommendations have been guided by our True North principles.

Although the platforms are new, the problem isn’t. Like in decades past, conservatives have been able to fight back against liberal media dominance because of the lack of government intervention and interference. It’s consumer and market-driven innovation and competition that gave way to conservatives’ success on talk radio, broadcast and digital media.

History offers a lesson for overcoming this challenge. You’re already seeing it happen with the proliferation of conservative media outlets like Daily Caller and President Trump’s ability to use social media platforms to bypass the traditional gatekeepers of news and information.

Heritage’s detailed report on the issue, called “Free Enterprise Is the Best Remedy for Online Bias Concerns,” can be found here.