When most Americans think of Slovenia – let me rephrase that: Were an American to think of Slovenia, the first thing likely to pop into their mind would be First Lady Melania Trump. And who could blame them? The former Yugoslav republic isn’t exactly a well-known country among Americans, and Mrs. Trump is by far its best-known native. While the Arex Rex Delta is unlikely to dethrone her from that perch, it might just be Slovenia’s second-best export.

For one thing, Slovenia is a fairly remarkable place. Located at the Northwestern tip of what was once Yugoslavia, it largely avoided the ethnic bloodshed that befell the Balkans in the 1990s and has thrived in the decades since. Today, its per-capita GDP is higher than Portugal’s, and the country’s workforce is highly educated. The folks who build the Rex Delta impressed me even more than the company’s first completely in-house-designed, striker-fired pistol when I visited the Arex plant in Šentjernej.

All spoke outstanding, if not fluent, English, and all knew everything about the ins and outs of the various shiny-new CNC machines and robots used by the two-decade-old defense contractor. That’s right: Arex has been making OEM parts for numerous international defense manufacturers—including machine-gun barrels and grenade casings—for the better part of 20 years, so the company has roots in the small-arms world.

About four years ago, Arex launched its first handgun, the Rex Zero 1. This metal-frame, DA/SA pistol looked a heck of a lot like a SIG Sauer P226 and functioned extremely well. Given an MSRP of $620, they were also significantly less expensive than the SIG pistols. Arex followed with its Alpha competition gun, which is among the most accurate pistols I’ve shot. It, too, is priced extremely competitively for its class at $1,099. But, something was missing from the company’s line. 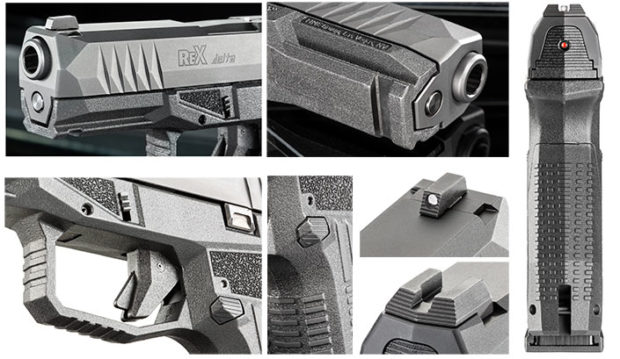 Serrations at the front of the slide are a nice, practical touch • The polymer trigger sports a blade safety and sits within a large trigger guard • Both front and rear sights are dovetail-mounted and drift adjustable. The single dot on the front is extremely easy to find in the large rear notch, making the sights ideal for common self-defense distances • A single accessory-mounting point on the dustcover rail allows attaching a light or laser • Four interchangeable backstraps ship with the Rex Delta, making it easy to fit the gun to your hand • Slightly recessed into the frame and ambidextrous, the magazine-release button is both easy to use and snag-free.

–
That something was fairly obvious to everyone from outside observers to Arex itself: A handgun more appropriate for concealed carry. The solution is the Rex Delta, a polymer-frame, striker-fired 9 mm nearly identical in size to the Glock G19 (actually, the Delta is a hair smaller in every dimension and also about 1.5 ounces lighter). Thanks to its dimensional similarity to the G19, it fits most holsters made for that extremely popular Austrian pistol, so it won’t be difficult to find a means of carrying the Rex Delta. About 75 percent of the G19 holsters we have on hand (and we have many) fit the Delta perfectly. I usually carry a G19, and the Rex Delta fit in my Comfort Holsters rig without a hitch. For those looking for a purpose-built holster made specifically for the Delta, ANR Design offers a Kydex IWB model.

With the knowledge that carrying the Rex Delta won’t be difficult, you may be asking why you should pick it as opposed to another of the vast multitude of similar handguns on the Gilgameshian-level flooded market. For starters, there’s the MSRP, which is $479, but it generally goes for about $50 less at retail. That puts it in a very sweet spot for a pistol of its quality.

Then there are the user-friendly features of the Rex Delta. Serrations at the front and rear of the slide make racking it easy, and intelligent texturing on the grip makes for a comfortable and secure shooting experience (I hate myself for referring to shooting in that fashion, but this is the first issue of 2020, so here we are). Additionally, extremely fine texturing at the top of the grip and above the trigger guard further enhance purchase and comfort. The pistol also ships with four sizes of interchangeable backstrap inserts to help fit it to your hand. A pin punch is all you’ll need to change them out, and all sizes blend nicely into the lines of the Rex Delta for those who care about aesthetics.

Ambidextrous slide-stop levers are recessed to prevent snagging • Texturing at the front of the frame provides a reference point for thumbs. At the rear of the slide, a red striker-status indicator protrudes when the pistol is cocked, making for a visual and tactile reference.

–
Two proprietary magazines made by Mec-Gar ship with the handgun—one with a small baseplate and one with an extended version. Both are marked for 15 rounds, but the extended model will hold 17 (the last round being very difficult to load). The extended baseplate adds about .4 inch to the pistol’s height, so it probably serves best as the reload you carry on your belt.

Arex clearly spent a good deal of time working to make the Rex Delta’s trigger top class. It is a polymer unit with a blade safety to ensure the gun will not fire without the trigger being pulled rearward. While it has a bit of slop in the short take-up, it breaks quite cleanly and has perhaps the best reset of any handgun I’ve fired. The reset is profoundly tactile and audible, meaning you will absolutely know when the trigger is ready to go rearward again.

The slide lock and magazine release are both low-profile and ambidextrous—very nice features for a defensive handgun that might need to be operated with your weak hand or even (perish the thought) by a left-handed shooter. They also won’t snag on cover garments during the draw, as they are almost completely recessed into the frame. You might notice cutouts at the rear of the frame, just below the slide serrations. They are there for the future addition of ambidextrous manual safeties should the market or a law enforcement/defense customer request them, which is solid foresight on Arex’s part. At the rear of the slide, a red dot protrudes when the striker is activated, providing both a visual and tactile indication of readiness.

Disassembly for field stripping the Rex Delta is easy, which is to be expected of a modern pistol. What is unexpected is the manner in which the slide is removed. Pulling the disassembly latches (one on each side) downward while retracting the slide slightly to the rear unlocks the top half for removal. Then, moving the slide forward an almost imperceptible distance (4 mm according to Arex) decocks the striker and allows the slide assembly to be removed by simply pulling straight upward. Reassembly is also accomplished in a straight line, which is uncommon among handguns in its class. 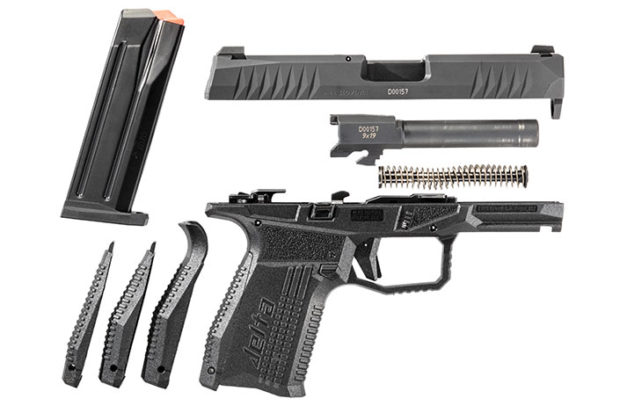 Fieldstripping the Rex Delta is similar to the process for Glock pistols, but the slide simply lifts up and off the frame. This makes disassembly and reassembly extremely easy.

–
Low-profile, steel sights are dovetail-mounted to the slide and are drift-adjustable for windage. The front sight has a serrated face with a white dot inserted into its body, while the rear sight is also serrated and has a cavernous “U” notch. While that extra-large notch makes finding the front sight fast and easy, it does limit accuracy, as it is more difficult to center the front post and/or dot in the rear sight’s canyon. For a pistol designed for concealed carry, however, pin-point accuracy is less important than the ability to achieve solid hits on target rapidly, so this is not a huge concern, particularly at common self-defense ranges inside of 7 yards. 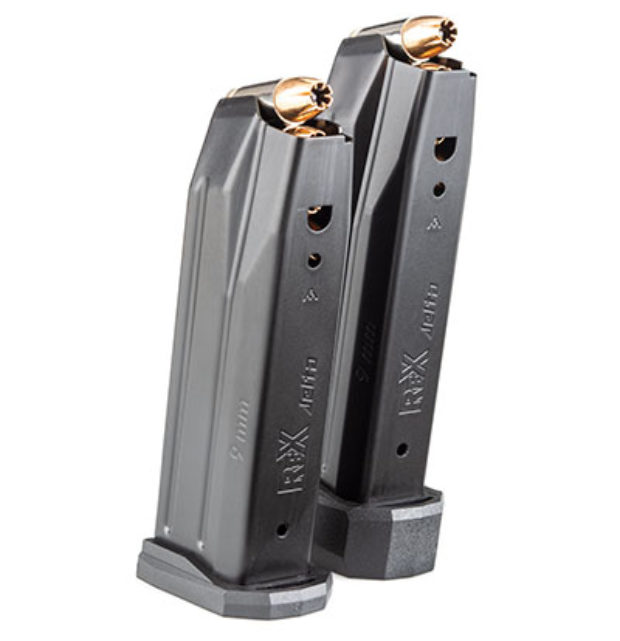 Two magazines ship with the Rex Delta. The flush-fitting version holds 15 rounds, while the extended model holds 17 and provides for a larger gripping surface.
–

I got the chance to shoot the Rex Delta in the Slovenian countryside at its launch in the fall of 2018. Those early-manufacture guns showed perfect reliability through hundreds of rounds fired by a dozen or so different shooters, so I was eager to see how a production model performed. Through more than 200 rounds of various bullet types and weights, the tested Rex Delta did not have a single hiccup.

Accuracy was likewise solid at 15 yards from a rest, and the handgun fared quite well in defensive drills at 5 and 7 yards. As mentioned, the sights are great for fast shooting at short range, but lack the capacity for extreme precision at longer ranges. The Rex Delta was also comfortable on the belt and easy to draw.

After seeing the advanced manufacturing processes at Arex and meeting the people who build the company’s handguns, I was impressed and fairly certain that the finished products would be outstanding. Having shot all of the company’s handgun models—from the Rex Zero 1 to the outstanding Rex Alpha—I can say they are, in fact, excellent pistols. The Rex Delta is no exception, and it should rank high on anyone’s list for a full-featured, concealed-carry pistol. 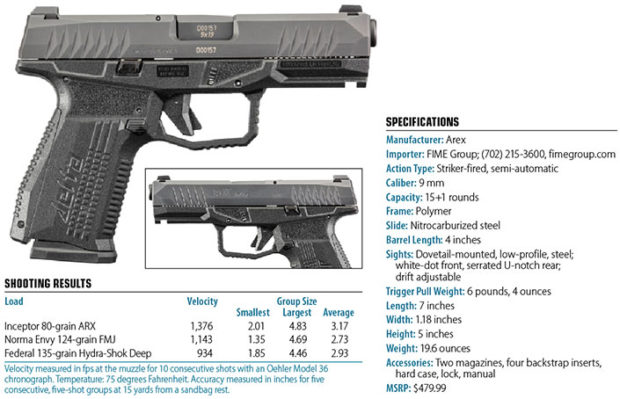