Protesters stormed the U.S. embassy in Baghdad, Iraq on Tuesday, getting through a main gate amid demonstrations against recent American airstrikes in Iraq on an Iran-backed militia group.

As hundreds protested against the airstrikes from Sunday, some began to try and break into the embassy according to CNN, who cited two sources at the scene. Security personnel used tear gas to prevent anyone from entering the building. The protestors scaled the walls of the compound, the outlet added.

Gunshots could be heard in the area, Fox News reported.

The protesters who broke in could be seen breaking embassy windows and security cameras, drawing graffiti on the walls and burning items just outside of the building. Some were heard shouting “death to America!” as well, according to the Washington Post.

They were about 200 meters from the main building and separated from the embassy’s security staff by glass windows, the Associated Press reported.

BREAKING: An armed Iraqi militia has stormed the U.S. embassy compound in Baghdad, after breaking down the embassy walls and starting fires around the compound.pic.twitter.com/aj9qmluxLi

U.S. troops were nearby as well, with some positioned on rooftops, but did not open fire on protesters, WaPo reported. Embassy civil defense workers inside the gates were using hoses to try to put out fires.

Iraqi security forces prevented demonstrators from attacking the U.S. embassy after being ordered by an Iraqi army commander, according to WaPo. 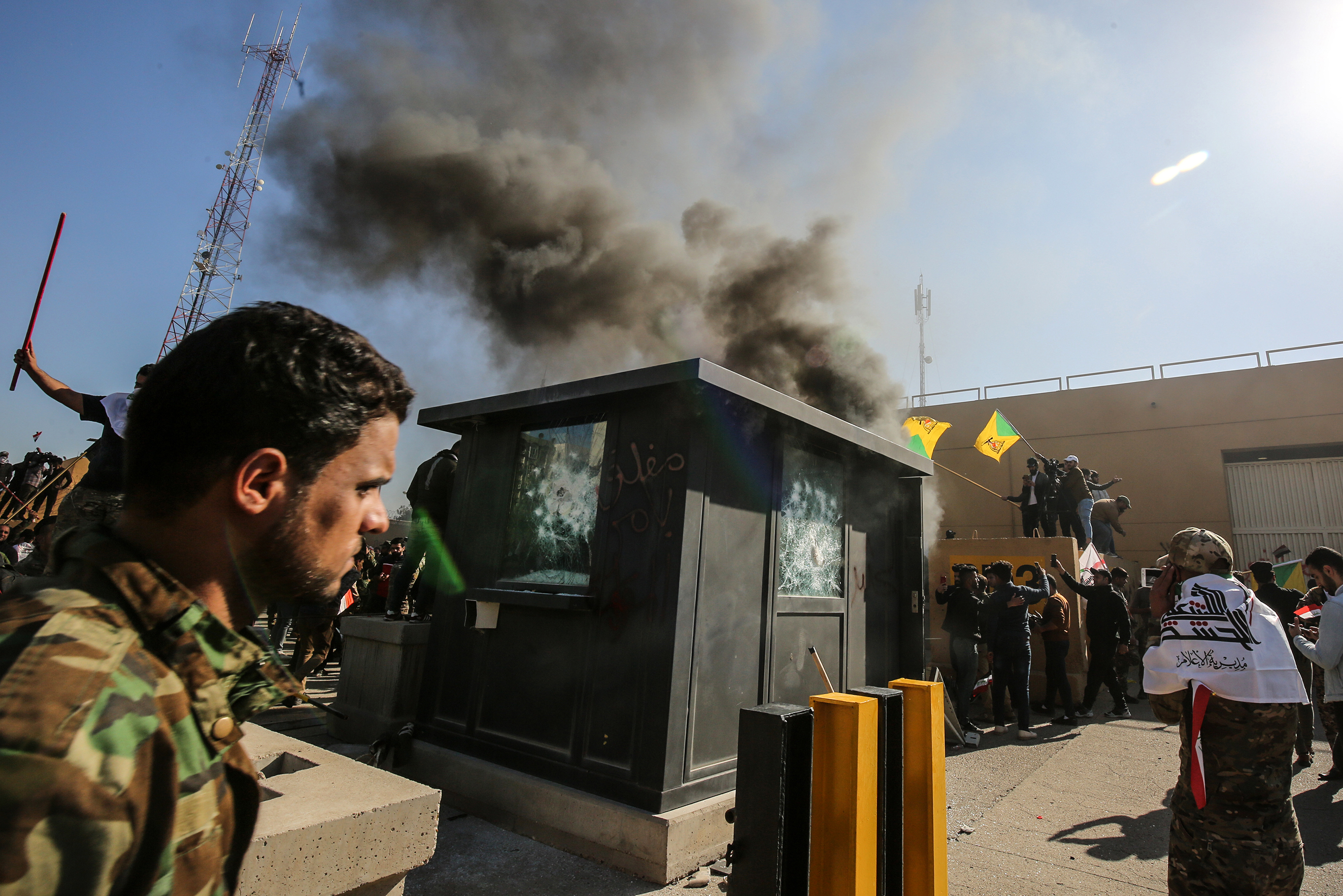 Members of the Iraqi pro-Iranian Hashed al-Shaabi group and protesters set ablaze a sentry box in front of the US embassy building in the capital Baghdad to protest against the weekend’s air strikes. (AHMAD AL-RUBAYE/AFP via Getty Images) 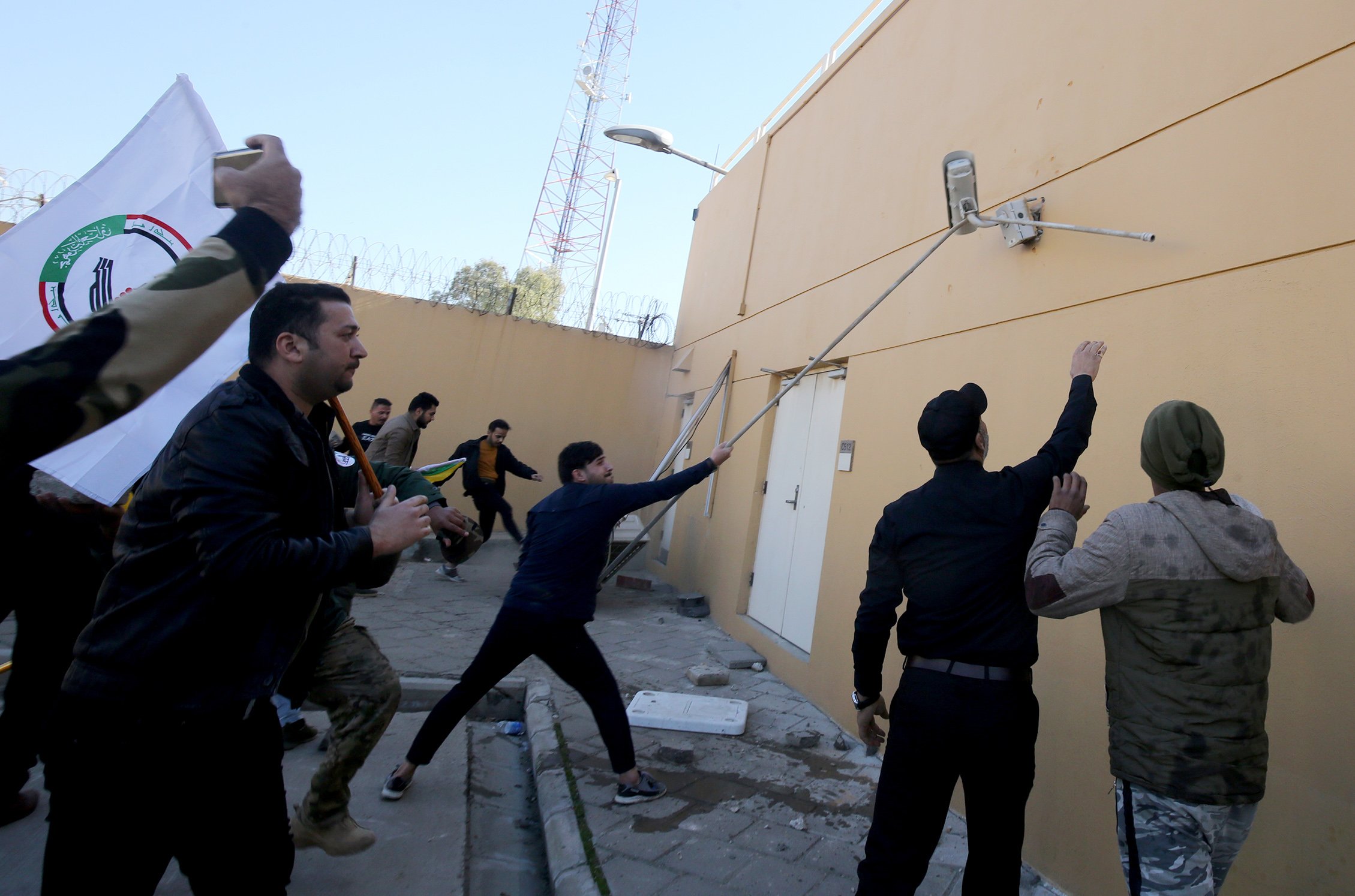 Iraqi protesters breach the outer wall of the US embassy in Baghdad during an angry demonstration on December 31, 2019 to denounce weekend US air strikes that killed Iran-backed fighters in Iraq. (AHMAD AL-RUBAYE/AFP via Getty Images) 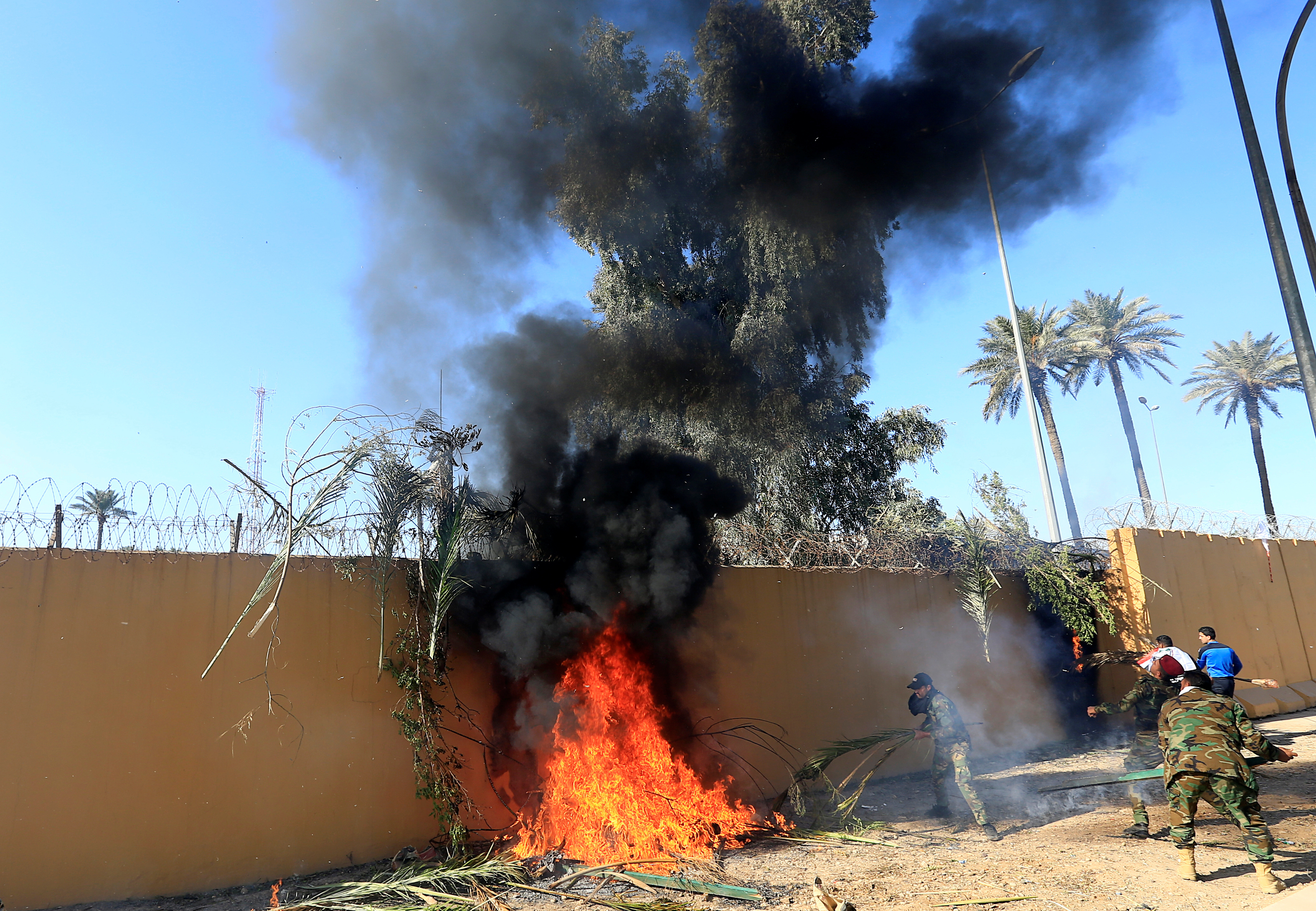 The U.S. ambassador to Iraq and other staff were evacuated from the embassy, according to an earlier report from Reuters. It is not known exactly when they left, but some protection staff remained behind.

The protests stem from five American airstrikes in Iraq and Syria on places controlled by Kataeb Hezbollah, an Iran-backed Iraqi Shia paramilitary group. At least 25 people died and 51 were wounded because of the airstrikes, which are a response to Kataeb Hezbollah’s rocket attacks on US-Iraqi targets, according to CNN.

Many of the protesters were members of Iraq’s Popular Mobilization Units (PMU), which is largely made up of Shiite militias. Abu Mahdi al-Muhandis, the military leader of Kataeb Hezbollah, was seen at the protests according to CNN. (Trump Denies He Gave Final Approval For Military Strikes Against Iran, Says No Planes Were In The Air)

Kataeb Hezbollah swore it would avenge the airstrikes Monday.

Iran killed an American contractor, wounding many. We strongly responded, and always will. Now Iran is orchestrating an attack on the U.S. Embassy in Iraq. They will be held fully responsible. In addition, we expect Iraq to use its forces to protect the Embassy, and so notified!