Around 100 U.S. Marines were sent to the American embassy in Baghdad, Iraq, to help with security as protestors attempted to break in Tuesday.

Fox News’ Lucas Tomlinson tweeted about the decision to send Marines to help fortify defenses, citing a U.S. defense official. The news comes as some of the hundreds protesting against Americans airstrikes began to try and break into the embassy, which is the largest U.S. embassy in the world.

More than 100 U.S. Marines have arrived at the U.S. embassy in Baghdad to bolster security after Iranian-backed militiamen attempted to breach the compound (video: USMC) pic.twitter.com/pxo7RwPUdd

The embassy has been put under lockdown and protestors have not breached the compound, CNN reported, citing an embassy spokesperson. They did manage to scale walls and force the gates of the embassy. Photos show protestors working to break down the embassy’s bullet-proof windows after breaching its outer walls. 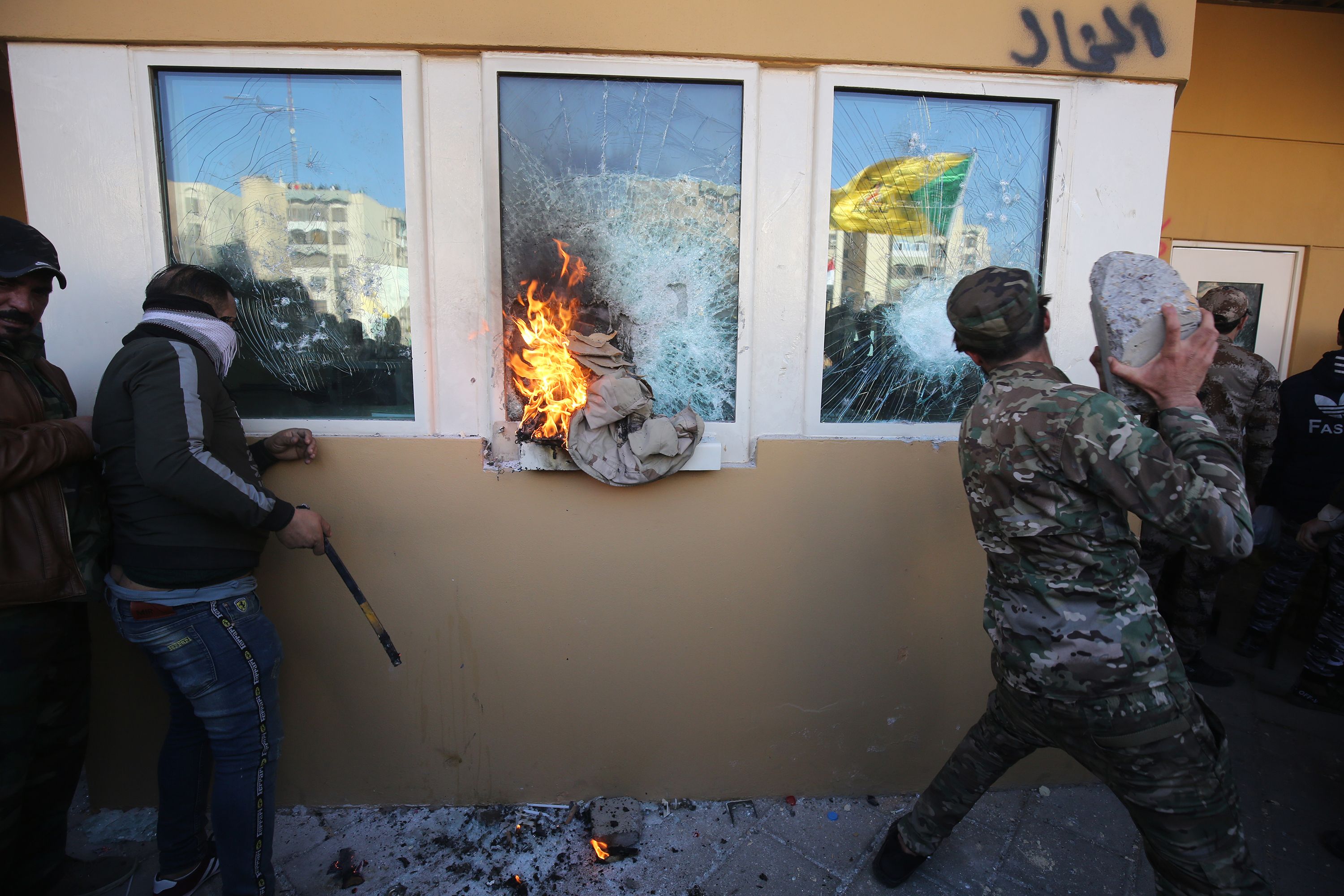 Members the Hashed al-Shaabi, a mostly Shiite network of local armed groups trained and armed by powerful neighbour Iran, smash the bullet-proof glass of the US embassy’s windows in Baghdad with blocks of cement. (AHMAD AL-RUBAYE/AFP via Getty Images)

This embassy employs around 16,000 staffers, but it is not clear how many people remain inside. It spans around 100 acres, which equals Vatican City in size. (Trump Denies He Gave Final Approval For Military Strikes Against Iran, Says No Planes Were In The Air)

Matthew Tueller, the U.S. ambassador to Iraq, has been on vacation and was not at the compound when the protests began, the embassy spokesperson said according to CNN.

Gunshots were reportedly heard in the area, according to Fox News. Security personnel used tear gas to prevent anyone from entering the building and protestors began to burn things outside of the building. They also broke windows and security cameras and could be heard shouting “death to America!”

BREAKING: An armed Iraqi militia has stormed the U.S. embassy compound in Baghdad, after breaking down the embassy walls and starting fires around the compound.pic.twitter.com/aj9qmluxLi

The protests stem from five American airstrikes in Iraq and Syria on places controlled by Kataeb Hezbollah, an Iran-backed Iraqi Shia paramilitary group. At least 25 people died and 51 were wounded in the airstrikes, which are a response to Kataeb Hezbollah’s rocket attacks on US-Iraqi targets, CNN reported.

“While we condemn the US air strikes on Iraqi military units, and acknowledge that symbolic funeral marches for the martyrs is a solemn act of remembrance, those taking part must stay away from diplomatic buildings and compounds,” the PM said according to a tweet from the Iraqi government.

Commander-in-Chief PM @AdilAbdAlMahdi issues a statement on the latest developments in Iraq.