President Donald Trump has promised American farmers that China will start buying as much as $50 billion worth of farm goods in the latest round of trade talks between the two global superpowers.

During the early 1990s, China imported roughly $1 billion in farm goods from the U.S., but that number surged to nearly $26 billion as the country’s population surged and demand increased, according to the Associated Press. The Trump administration has signaled that China would ramp up its agricultural purchases to at least $40 million or even as high as $50 million by next year, a promise some farmers are taking with a grain of salt.

“History has never been even close to that level,” said Chad Hart, an agricultural economist at Iowa State University. “There’s no clear path to get us there in one year.” (RELATED: US, China Take Another Step In Trade Talks, Chinese Official Says)

But not everyone is so skeptical of Trump’s outlook.

“At this point, we’ve gone this far, we want to make sure we get a good deal,” Iowa soybean farmer Grant Kimberley told CNN. “We’d rather have trade than aid. But it’s been a godsend to have that, otherwise things would look pretty ugly.”

Farmer John Duffy loads soybeans from his grain bin onto a truck before taking them to a grain elevator on June 13, 2018 in Dwight, Illinois. U.S. Soybean futures plunged today with renewed fears that China could hit U.S. soybeans with retaliatory tariffs if the Trump administration follows through with threatened tariffs on Chinese goods. (Scott Olson/Getty Images)

The exact details of Trump’s Phase 1 deal with China have yet to be made public, and Chinese officials have declined to confirm the $40 million number. China said details will be released after the deal is formally signed on January 15. Nevertheless, Trump’s trade representative Robert Lighthizer remains confident in the $40 billion number.

I will be signing our very large and comprehensive Phase One Trade Deal with China on January 15. The ceremony will take place at the White House. High level representatives of China will be present. At a later date I will be going to Beijing where talks will begin on Phase Two!

“The purchases should be based on market principles,” Tu Xinquan, director of the China Institute for WTO Studies in Beijing told the AP. “The United States should compete with other countries through price and quality.”

Chinese imports did nearly double following the announcement of the agreement, but they had fallen so severely due to tariffs that they still aren’t near pre-trade-war levels, let alone the numbers U.S. farmers have been told to expect.

As it stands, China would need to begin importing nearly half of its farm goods from the U.S. to reach those numbers, which would mean cutting back on imports from other trade partners like Canada. (RELATED: Who Is Winning The Trade War – The US Or China?)

“Most foreign media don’t believe that China can fulfill the commitments,” Shanghai-based consultancy JCI told Reuters. “But as a Chinese consultant company on (the) agricultural market, JCI strongly believes that China has the ability and will fulfill its promise.”

Cutting against the skepticism is the fact that China has massively increased its demand for pork in recent months due an epidemic of the African Swine Fever killing roughly a quarter of its pigs, according to Reuters.

But fewer pigs means that even as China buys more pork from the U.S., they need less soy to feed the pigs they have. 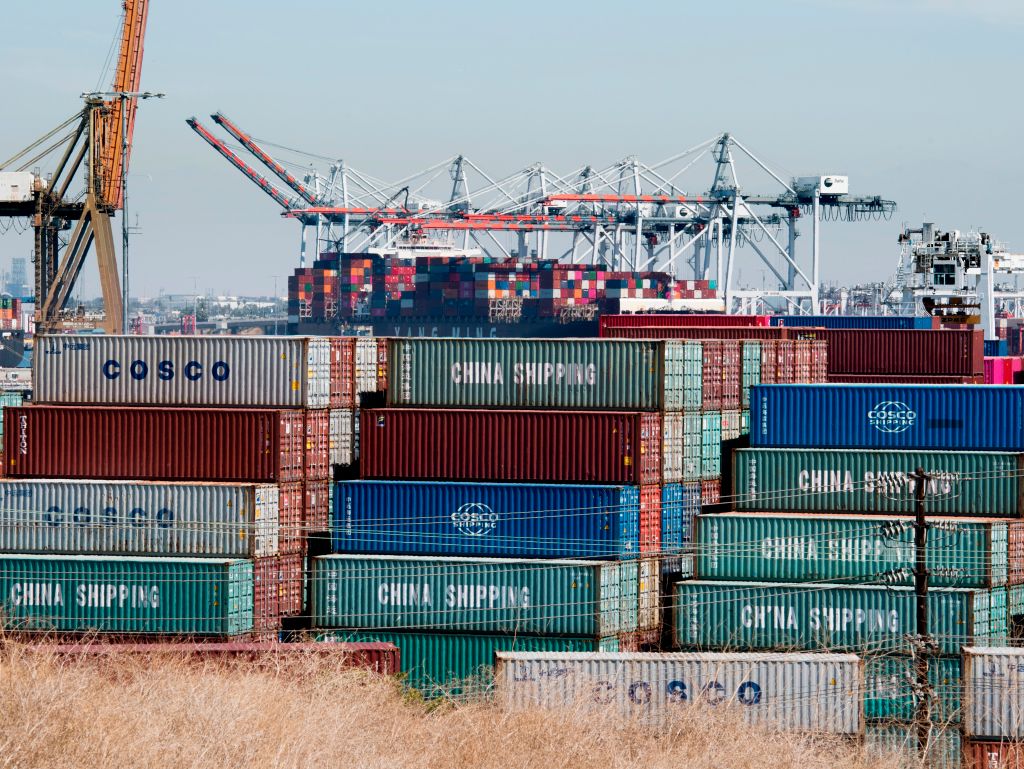 Shipping containers from China and other Asian countries are unloaded at the Port of Los Angeles as the trade war continues between China and the US, in Long Beach, California on September 14, 2019. – China announced it will exempt soybeans and pork from its retaliatory tariffs. (Photo by Mark RALSTON /Getty Images)

The vast majority of pig farms in the U.S. are based in the same Midwestern states that have been hardest hit by the trade war, and they stand to benefit greatly from the Phase 1 deal.

China is the largest pork market in the world and has made plays to dominate U.S. pork production, purchasing the world’s largest pork producer – U.S.-based Smithfield Foods – in 2013. At the time, the $5 billion purchase was the largest-ever foreign takeover of a U.S. company, according to CNN.

There’s no sign of China taking a similar strategy in the U.S. soy industry, however. (RELATED: Trump Announces When And Where He’ll Sign The First Phase Of The US-China Trade Agreement)

Nevertheless, pork accounted for just 5 percent of US agriculture exports to China in 2017. Soybeans are a much bigger story at 52 percent, and reliance of U.S. soy companies on China’s demand cannot be overstated.

Before Trump’s trade war, the U.S. was supplying one third of China’s total soy consumption, and roughly two-thirds of U.S. soy production by volume ended up in China in 2016 and 2017.

Chinese President Xi Jinping listens at Chairman of the Standing Committee of the National People’s Congress (NPC) Li Zhanshu’s speech, during the second plenary meeting of the NPC at The Great Hall Of The People on March 8, 2019 in Beijing, China. (Photo by Andrea Verdelli/Getty Images)

But while China may not be buying up U.S. soy companies, their domestic farmers have begun picking up the slack left by the tariffs.

Even so, China consumes 110 million tons of soy per year and produced just 16 million tons domestically in 2018. Expansion of its own farming would bring that to just under 20 million tons, meaning more than 80 percent would still need to be imported.

While “Phase One” of the U.S.-China talks is set to be finalized Jan. 15, it remains to be seen how much of that 80 percent will be coming from the U.S. or whether China will prioritize other competitive nations such as Brazil.