The Trump administration announced Thursday that it will ban most types of flavored e-cigarettes in an attempt to crack down on teenage smoking.

The ban outlaws most flavored vapes such as fruit and mint flavors, but it allows exceptions for certain types of flavors, including tobacco and menthol, according to the Associated Press. (RELATED: New Poll Shows Trump Leading Top Democrats In Blue States)

The plan released Thursday by U.S. health officials deviates significantly from what the president said he wanted to do in September when he first floated a vaping ban. (RELATED: The Tide Is Turning Against Democrats On Impeachment) 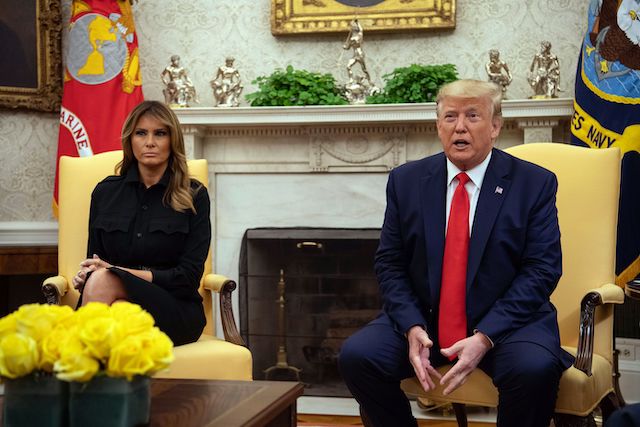 US President Donald Trump, with First Lady Melania Trump, speaks to the press in the Oval Office at the White House in Washington, DC, on September 11, 2019. (Photo credit: NICHOLAS KAMM/AFP/Getty Images)

Trump at the time announced a ban on all flavored e-cigarettes, saying that he and first lady Melania Trump were concerned about its use among young people.

“She’s [Melania Trump] got a son … that is a beautiful young man … And she feels very, very strongly about it,” the president said at the time.

A survey released at the end of 2018 showed that over 1.3 million high school students started using tobacco in 2017 and 2018, which some blamed on increased access to vaping products. The vaping epidemic reached a fever pitch earlier this year after the Centers for Disease Control and Prevention (CDC) published a report claiming that there have been over 450 cases of vaping-related deaths in the U.S. However, opponents of the administration’s ban have pointed to black market THC, a chemical used in Marijuana, as a source behind vaping-related deaths and illnesses.

“The United States has never seen an epidemic of substance use arise as quickly as our current epidemic of youth use of e-cigarettes,” Secretary of Health and Human Services Alex Azar said in a statement, according to NBC News.