A coalition of blue states and congressional Democrats asked the Supreme Court Friday to salvage the Affordable Care Act’s (ACA) individual mandate, after a federal appeals court declared it unconstitutional.

The petitions also urged the justices to hear the appeal on an expedited basis and ensure the dispute is resolved by the end of the high court’s term in June. The request is unusual, and the justices may prefer a slower pace.

“The lower courts have struck down a federal statutory provision on constitutional grounds and cast doubt on the validity of the entire ACA, arguably the most consequential package of legislative reforms of this century,” the blue state petition reads. “That uncertainty threatens adverse consequences for patients, providers, and insurers nationwide.”

“Under these circumstances, this Court should grant immediate review and resolve the case this Term,” it adds.

Congressional Democrats filed their petition separately. Both the House and the blue states proposed a case schedule culminating with oral arguments in late April. The states also broached the possibility of a special sitting in May to hear the dispute. A decision would follow in June.

Whether the justices are willing to take up yet another politically sensitive dispute at this juncture is an open question. The high court’s docket is already heavy on fraught disputes including gay rights in the workplace, President Donald Trump’s bid to end the Deferred Action for Childhood Arrivals (DACA) program, and subpoenas for the president’s personal and professional financial records, among other items. (RELATED: Two Hundred Members Of Congress Are Urging The Supreme Court To Revisit Roe) 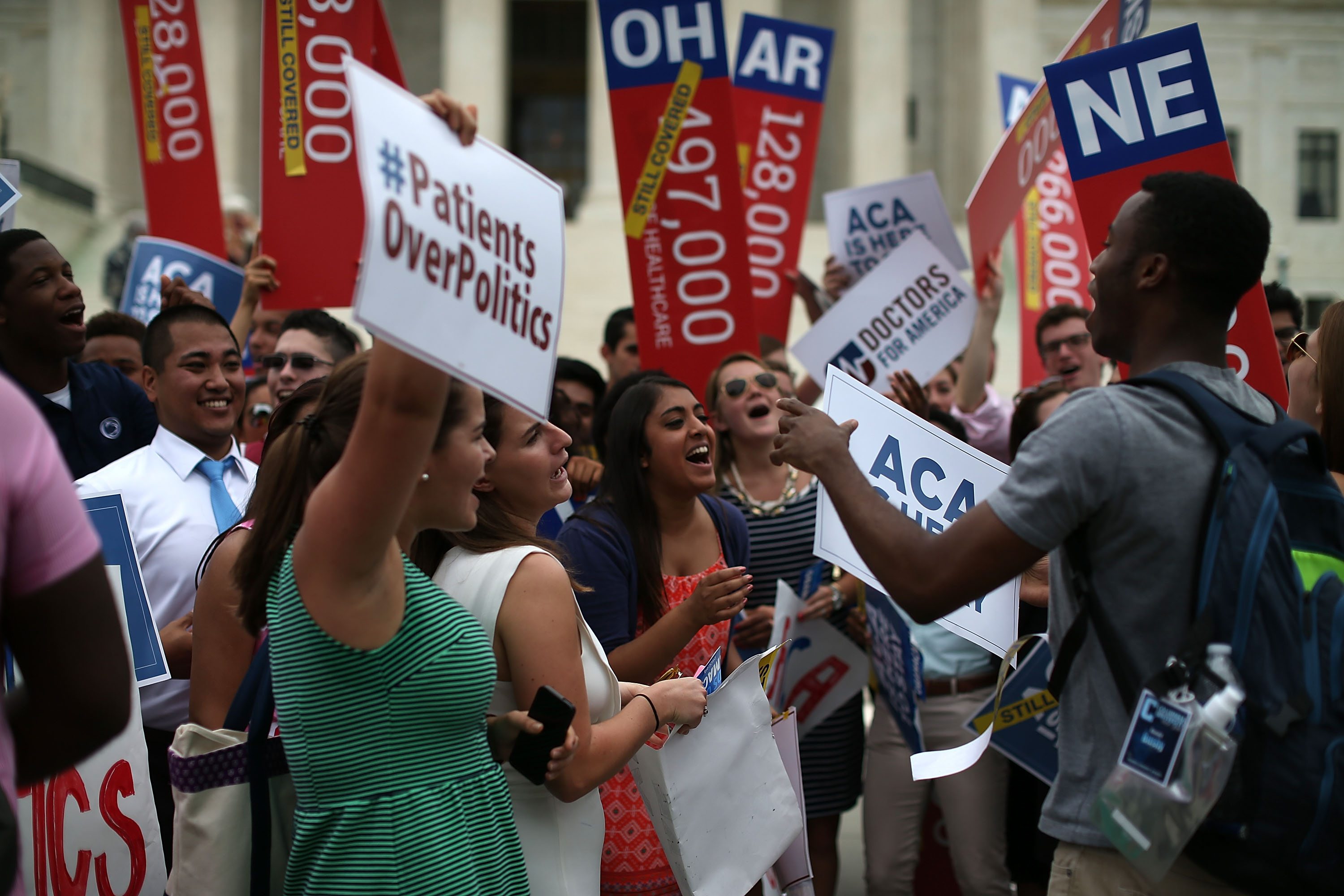 Pro-ACA demonstrators in front of the Supreme Court on June 25, 2015. (Mark Wilson/Getty Images)

Friday’s case arose after passage of the 2017 Tax Cuts and Jobs Act. The landmark tax reform law set the financial penalty for failing to purchase health insurance at zero. A coalition of Republican states then challenged the individual mandate in federal court. They argued the mandate could no longer be justified as a tax, since it isn’t raising revenue. The Supreme Court cited Congress’s taxing power as a sufficient justification for the mandate in 2012.

The 5th U.S. Circuit Court of Appeals agreed with the GOP plaintiffs and struck down the individual mandate in December. The court did not strike down the ACA in its entirety, however. Instead, it sent the case back to a federal trial judge to determine whether the rest of the statute may stand. The Supreme Court may wait until those proceedings conclude before taking up the case.

The Trump administration says Obamacare should be struck down in its entirety. House Democrats and the blue state coalition intervened in the case to take up the law’s defense, since the Department of Justice would not do so.

Another ACA dispute is pending before the high court. That dispute involves a group of insurance companies seeking some $12 billion for losses incurred on the Obamacare exchanges. The ACA provides that the government “shall pay” insurers a portion of their losses, but Congress has never appropriated money for such payments.