Republican Texas Sen. Ted Cruz issued a pointed response to an Obama administration alumnus after he suggested the killing of Iranian Gen.Qasem Soleimani would lead to a “worst case scenario.”

“Trump may have just started a war with no congressional debate. I really hope the worst case scenario doesn’t happen but everything about this situation suggests serious escalation to come,” Ben Rhodes, a former national security aide to President Barack Obama, tweeted Thursday night.

The statement followed news that President Donald Trump ordered a strike against Soleimani, the leader of Iran’s elite Quds Force, killing him instantly.

In response to Rhodes’s tweet, Cruz asked if it would have been a better choice to send the Iranian regime $1.7 billion in unmarked bills — an apparent reference to the Obama administration’s shipment of money to Tehran as part of its end of 2015 Iranian nuclear deal. 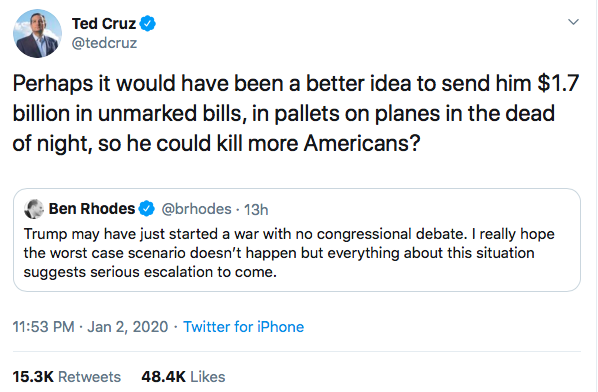 “Perhaps it would have been a better idea to send him $1.7 billion in unmarked bills, in pallets on planes in the dead of night, so he could kill more Americans?” the junior GOP senator from Texas wrote.

Rhodes, a top speechwriter and adviser to Obama, was involved in the 2015 Iran nuclear deal, which consisted of a number of U.S. concessions in return for the Iranian regime giving up its nuclear capabilities. Critics, however, pointed to mounting evidence that Tehran was repeatedly violating the terms of the agreement. Trump pulled out of the agreement altogether in 2018.

The Pentagon confirmed late Thursday that Soleimani, who is blamed for the deaths of hundreds of Americans, was killed by a drone strike near Bagdad’s airport. The strike came after Iranian-backed protesters stormed the U.S. embassy in Baghdad on Tuesday. Kataeb Hezbollah military leader Abu Mahdi al-Muhandis, who was spotted at the embassy protests, was also killed by the U.S. drone strike. (RELATED: Ilhan Omar, Liberals Accuse Trump Of Killing Terrorist Soleimani As A ‘Distraction’)

Since the end of the Obama administration, Rhodes has remained a steadfast critic of Trump. He was filmed breaking down on the night of Trump’s upset victory against Hillary Clinton.