Graphic photos of Jeffrey Epstein’s dead body and the jail cell where he died of an apparent suicide were aired by CBS News’ “60 Minutes” Sunday evening.

Multiple photographs were given to “60 Minutes” by pathologist Michael Baden, who was hired by the alleged child sex trafficker’s family to look into his death, according to the show. Baden suggested that Epstein could have been murdered despite the medical examiner’s official report that he died of a suicide on Aug. 10.

The pictures range from Epstein on a metal slab after his death, close-ups of the ligature marks around his neck and images of the inside of the jail cell where the apparent suicide occurred. 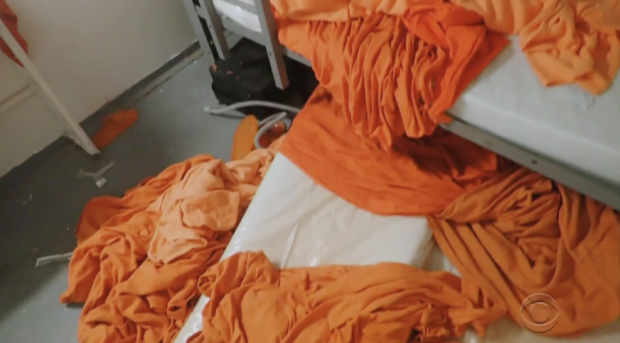 The ligature marks don’t match the nooses in the jail cell, Baden said while speaking to host Sharyn Alfonsi in the segment that aired Sunday. He did not say definitively that Epstein’s death was not a suicide, adding that he still had more investigating to do.

“The forensic evidence released so far, including the autopsy, point much more to murder and strangulation than the suicide … the suicidal hanging,” Baden said. (RELATED: NBC, ABC And CBS Appear To Have Run Cover For World’s Most Powerful Rape Rings)

Baden dismissed the idea that he would automatically assume suspicion surrounding Epstein’s death because he was hired by the family. Baden noted that his “job is to find what the truth is.”

The pathologist noted that Epstein’s death may not have been a suicide because of the “unusual fractures” he viewed in the dead financier’s neck.

“I have never seen three fractures like this in a suicidal hanging,” according to Baden.

The New York City medical examiner’s office has disputed Baden’s theory, “60 Minutes” reported. The office said that they stand “firmly” behind their finding of suicide by hanging, noting that the fractures can be found in suicides as well as homicides.

“60 Minutes” also obtained a handwritten note, allegedly from Epstein, found in the jail cell where he died. The note read that “One guard kept me in a locked shower stall for one hour. Noel, the guard, sent me burnt food. Giant bugs crawling over my hands. No fun!!”

Epstein was arrested in July on charges of child sex trafficking and was awaiting trial in a Manhattan jail when he died of an apparent suicide. Many have speculated that the death was not a suicide, and investigations into those close to Epstein are reportedly ongoing.