The United States Secret Service is “aware” of an Instagram post from comedian George Lopez that many perceived as a threat on President Donald Trump’s life.

“The Secret Service is aware of the [post] made by Mr. Lopez,” a U.S. Secret Service representative told the Daily Caller via a statement. “The Secret Service takes all threats against the President and or any of our protectees seriously, and as a matter of practice, we do not comment on matters involving protective intelligence.”

Lopez made the post Sunday night in response to a Chicano World Star post about a eulogist who called for an $80 million bounty on Trump’s head during the funeral of Iranian General Qasem Soleimani, killed Thursday near a Baghdad airport by a U.S. drone strike.

#Iranian authorities have put a bounty on American President Donald Trump’s head during the televised funeral of General #QasemSoleimani after he was assassinated last week. What are your thoughts?

“We’ll do it for half,” the comedian wrote, leading many to wonder if the detail in charge of protecting the president was aware of the statement. (RELATED: Kathy Griffin Defends ‘Beheading’ Trump Photo – Says She Did Not Use Real Human Head Or Blood) 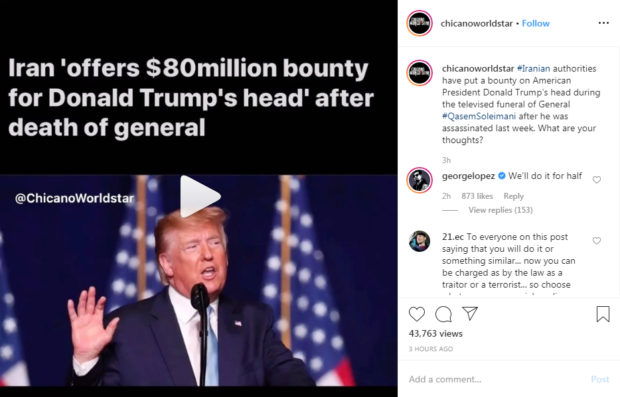 “We are 80 million Iranians, if each one of us puts aside one American dollar, we will have 80 million American dollars, and we will reward anyone who brings us [Trump]’s head with that amount,” the eulogist said. Although it appeared on Iranian state TV, it was unclear whether Iran’s government condoned the statement. However, an Iranian parliament member threatened to “attack the White House itself” in response to the general’s killing.