Here’s A List Of Some Of The Most Unusual Animals, Reptiles Available At A Typical Wuhan Wet Market
Shelby Talcott Media Reporter
January 07, 2020 11:27 AM ET
Font Size:

ABC News deleted a misleading tweet Tuesday depicting the wildfires in Australia and issued a correction.

The original tweet showed “a superimposed map of Australia over the U.S.” It claimed to depict “the scale of the massive wildfires that have spread across the country.” 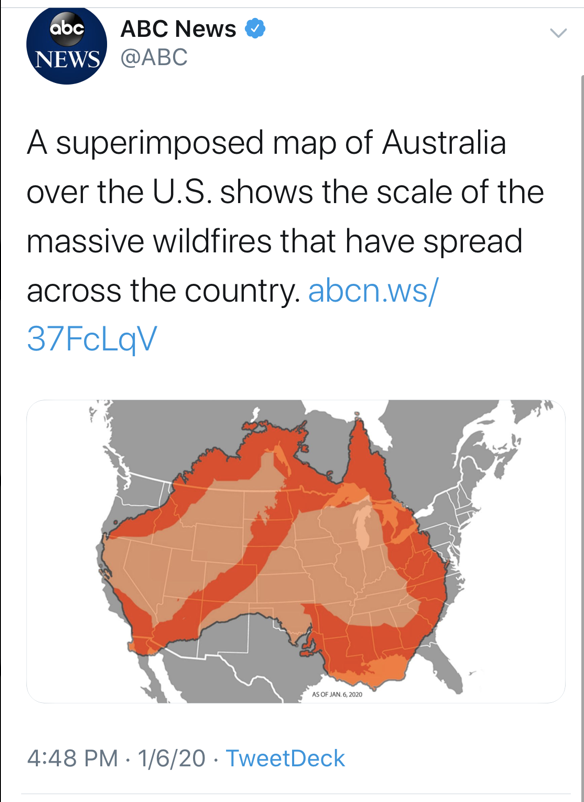 A now-deleted tweet from ABC News claimed to show the spread of wildfires in Australia superimposed on top of a U.S. map. (Screenshot Twitter, ABC News)

The tweet received backlash, with many noting that the map appeared to show all of Australia on fire. The wildfires have been going on since September and scorched an area two times the size of Maryland, according to Fox News.

ABC News issued a subsequent tweet with a correction after deleting its original. The outlet also updated its article with the new map.

A superimposed map of Australia over the U.S. shows the spread of the many massive wildfires raging across the country. [Corrects previous map, which indicated overall regions affected the blazes.] https://t.co/XeL6IjyZWZ pic.twitter.com/fy2JOOsZEt

“A superimposed map of Australia over the United States shows the hot spots around the country as the massive wildfires have spread Down Under,” the article reads.

Over 130 fires are still burning in New South Wales alone, according to ABC News. Some of the fires are believed to have been deliberately started. (RELATED: Here’s What Wildfires Are Doing To California As Citizens Cope With Rolling Blackouts)

1
Sen. Kelly Loeffler Says She Will Liquidate Individual Stock Shares After Coronavirus Stock Dumping Reports
Politics
2
'If You Don't Want More Body Bags': World Health Organization Director Hits Back At Trump
World
3
Key Figure In Clinton-Lewinsky Scandal Dead
Politics
4
'I Cant Even F**k': Cardi B On How Bored She Is In Quarantine
Editorial
5
CBS Will Start Airing Major Movies On Sunday Nights During The Coronavirus Pandemic. Here's What You Can Watch
Editorial